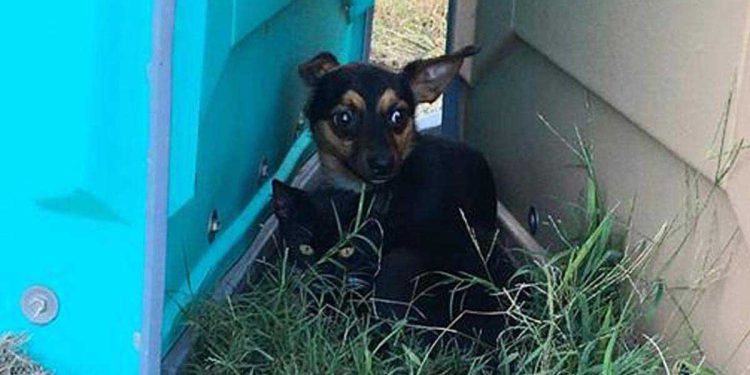 This puppy was found protecting the kitten friend from him and would not let anyone get near them. The couple are looking for a home together

Angela Ward was at the Hampton Soccer Park football field in Hampton, Virginia, and she managed to see a couple of defenseless animals huddled in the grass between two portable toilets, it was a Chihuahua puppy that was taking care of a small kitten.

The woman along with her daughter Madison and her friend Kristin Schultz decided to seek help and made a post on the social network Nextdoor telling the situation and its location. Thus, it was that a few animal lovers responded to her call and rushed to the place.

When the modesty arrived, the two-year-old Chihuahua did not want to get away from the kitten, according to The Dodo.

One of the rescuers posted on social media:

Totally bonded… the dog growls if we get too close, so we have notified animal control and are waiting for them. Three of us are pending at this time.

Puppy refused to part with her best friend

The dog was named Gomez and the cat was named Morticia. Both were taken to the vet for medical attention. They were later transferred to a local shelter and a photo of the two was posted on Lost & Found Pets de Hampton Roads, VA facebook group in the hopes that their family would turn up, but they didn’t.

They looked so scared in the photo. We tend to favor the scared because they just don’t understand when you’re trying to help.

Turkan couldn’t stop thinking about this pair of friends, especially since cats and dogs are separated in shelters.

In most shelters, it is against the policy to put dogs and cats together for safety reasons and we knew they would be separated. Their plight kept us awake at night worrying about how they were attached to each other.

Ella Turkan knew that they should remain together primarily because of their psychological health, but she was also concerned about the fact that it could not be guaranteed that a family would be interested in adopting them together.

Most shelters can’t get united pairs to adopt together.

Fortunately, the shelter workers didn’t want to separate Gomez and Morticia either, so they decided to set up play dates in a meeting room, and now they are in foster care.

[Gomez] ran up to the foster black cats initially, thinking one was Morticia and you could see her disappointment when he realized they weren’t her. Gomez is shy around people when he meets them, but he quickly gains confidence. He really opens up when Morticia is around. Both are happier and more open when they are together than when they meet people individually.

Once you are both neutered and spayed, you are ready to find a permanent home that will give you all the love you deserve.

Gomez and Morticia were adopted together, and they are happy in a forever home.