A Puppy Who Weighed Only 1.8 Pounds Is So Huge And Beautiful Now 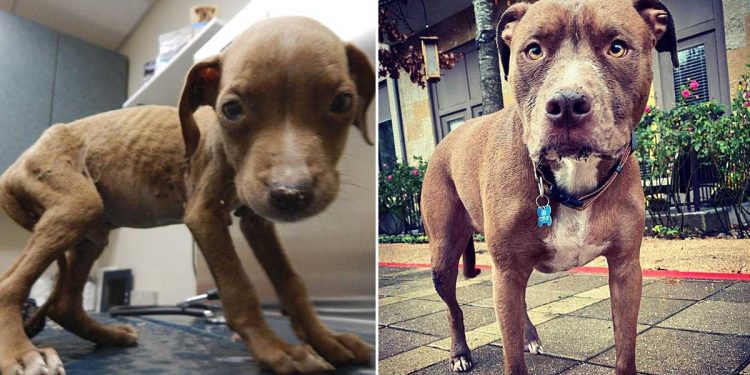 The little one weighed only 1.8 pounds, but he hung on for life. He has incredibly transformed and is now so tall and so handsome

A small, skinny puppy was discovered on the streets of Dallas, Texas (USA), the puppy was in poor condition and clinging to life. His condition was worrying and the rescuers at Dallas Dog RRR knew they couldn’t waste any time, so they decided to take him to the medical center immediately.

The puppy could barely lift his head and his eyes were wide open, unbelievably, he weighed only 1.8 pounds and it was obvious he was having a hard time living.

They named the puppy Stuart, and at the time they thought it was a Chihuahua because of its size, but to everyone’s surprise it was actually a Pit Bull.

His health was so bad that he didn’t even look like a pit bull puppy, as he was very small and his malnutrition was remarkable.

At the medical center, several tests had to be carried out on Stuart, in order to find out what illnesses he might be suffering from and to cure his condition.

Stuart’s blood test gave disappointing results, he was so anemic from fleas and ticks that he urgently needed a blood transfusion. The little puppy’s first two days were critical and worrying, it seemed like he had no consciousness and was constantly losing his mind.

His delicate condition did not improve, but rescuers were ready to do anything and fight to save the little boy’s life.

Fortunately, within five days, Stuart started to show little improvement and a woman named Susan wanted to provide him with a foster family.

The little boy seemed very happy in Susan’s house, but you could always tell he was struggling to continue living. Susan said Stuart appeared to be very tired, felt drowsy, sheepish, and usually stayed asleep for many hours.

It was several days after Susan brought Stuart home, and he started behaving like a normal puppy, he seemed to be feeling better. The news was a joy for all, and surely a great victory in the little journey of Stuart’s short life.

Little Stuart’s health recovered in its entirety over the days.

He eats well and he gains weight slowly, so overall he feels good to me and He absolutely LOVES his foster family!

Susan’s brother Shane decided to visit his sister in order to meet Stuart and find out if an adoption was possible. When they saw each other there was an immediate connection between them, Stuart climbed onto the couch where Shane was resting and rested his head on his chest.

At that precise moment, Shane realized he had to adopt Stuart, for fate had brought them together to be lifelong companions.

Now the little bear cub that once clung to life and struggled to get out of it had a forever home.

Stuart grew up very fast and healthy, becoming the most beautiful and sweetest pit bull in the world.

Shane lives in Austin, where they accept dogs of this breed, so he takes Stuart for walks almost everywhere; they are inseparable.

Stuart was called “Shiner” by his father, they have daily adventures together; she loves going to her favorite place and loves spending time with her dad.