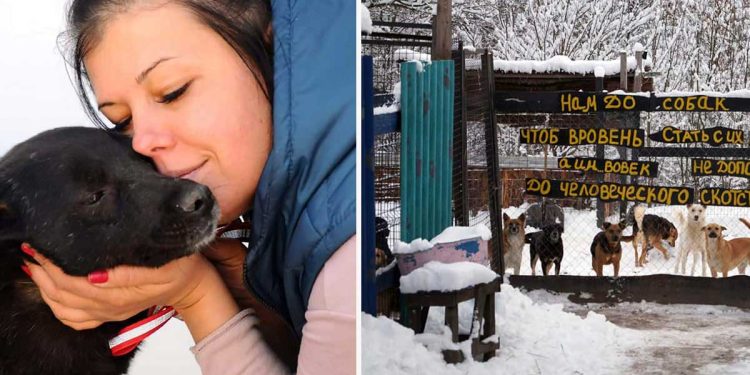 This brave Ukrainian refugee has returned to her country to help and care for dogs in need from her rescue center.

As thousands of Ukrainians flee their country in search of refuge after the bombings began in the country’s main cities, this brave woman named Marina Dilly, founder of Shelter Friend Ukraine, crossed the Polish border to shelter her children, then he decided to return to his native country to protect the lives of those who have no voice.

Marina decided to return to Ukraine to help thousands of abandoned dogs amidst the news and the destruction of cities due to relentless bombings.

The woman works with a team of people who have also decided to stay in Ukraine, rescuing the most vulnerable animals in their shelter in Dnipro, located in the middle of all the overrun cities.

Refugee returns to Ukraine to help and care for dogs

Over the past few days, the shelter has taken in a large number of abandoned and injured animals, but the woman worries that she won’t be able to care for them all soon as their current supplies are running out.

The rescue center urgently needs food, medicine and bedding to continue rescuing the needy dogs they have taken in.

Marina said according to Mirror.

Shelter Friend stays alive. Now I take all the animals that people leave and see on the streets. We are full but we continue to help. People continue to abandon animals. My phone became a direct line: I received many calls from people who left dogs chained or locked up in cities or second homes.

Amidst this disheartening panorama, Marina continues her efforts to help the animals that people are abandoning out of fear. The shelter currently has 7 kennels full of furry victims of a war they cannot understand.

Now the main pain is the hunger of strays and disoriented abandoned animals, because mermaids generate stress and fear of being alone.

This difficult reality that people who remain in Ukraine have to face on a daily basis, and especially those who refuse to leave their animals abandoned, is truly heartbreaking and has ended not only in human lives, but many animals have died in the worst circumstances. Marina has no veterinary care, so many needy dogs have died from injuries sustained on the streets.

Regardless of the obstacles, Marina continues her work and strives to help as many animals as possible with the few resources at her disposal, with her wonderful team who do not give up and who are the hope of these helpless hairy.

For her, as for millions of Ukrainians, the greatest wish is that this war ends soon and that they can return home.

When we have won and the war is over, I will first go to Poland to thank the Poles who take care of my daughters. I will bring my children home and find homes for the hundreds of needy animals in my shelter. Then I will realize my dream of building heated kennels in my shelter so that many animals come as I planned last year. I will go on vacation to the sea and breathe without this terrible feeling in my chest.