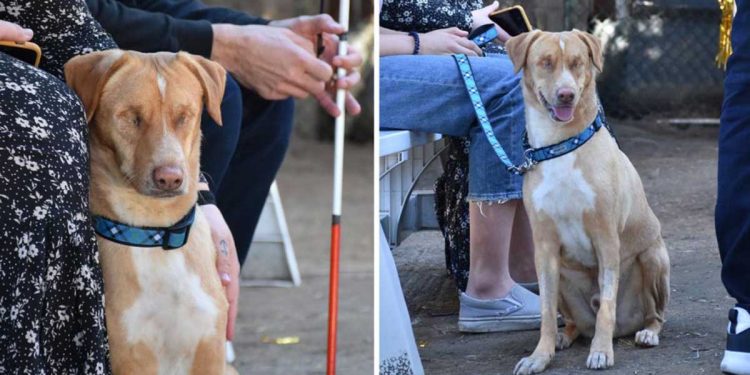 The touching story of a dog who was blinded and abandoned by his owners in an animal shelter has managed to captivate hundreds of people who are ready to help him find the perfect home.

Louis, a 3-year-old Labrador and German Shepherd mix, was released to a California kennel after having his eyes removed for an untreated eye infection.

Luckily, Helen Woodward Animal Center rescued him and took him to their facility in Rancho Santa Fe, California, knowing that his previous family had abandoned him.

A dog blinded by his former family finds love

They decided to give up their dog after surgery because they couldn’t adjust to life with a blind dog. Which had remained in these conditions after the heartless family decided not to provide medical help in time.

When he arrived at the animal center, Louis was heartbroken and very nervous to be in a place that was totally unknown to him.

A medical examination revealed that the dog also had previous injuries that had not been treated, such as a broken leg from a car accident.

Hella Tyler, director of the animal center, said in a statement:

It is very important that people who are considering having a pet know the obligations they have with these animals.

The staff at the center were devastated to learn how Louis had been treated in his old home, but they wanted to change his life. For this reason, the rescue center took the dog to a foster home, so that he could adapt to a life without sight, with the support of his new family.

But they knew that wasn’t enough, because Louis really needed to start the next chapter of his life with a forever family. The shelter staff therefore decided to share a video and several photos of Louis on Facebook, to try to find him the ideal family.

The publication made by the staff managed to impact hundreds of people, who did not hesitate to leave a like and the corresponding comment.

After the story spread around the world, the center provided an update on the case, saying there were hundreds of honest responses.

All we can say is… Thank you!” For anyone who has contacted us in the past 24 hours about Louis, we are honored to see how much his story has touched you. We knew this story was going to be tough and that many of you wanted to take action.

Staff said that in addition to receiving hundreds of calls and emails, they also received donations, adoption requests and offers of free services for Louis.

In just 24 hours, the animal center received $12,000 in donations from around the world, and they keep coming.

Renee Resko, vice president of the center, said in a statement:

We are amazed and touched by the response and the donations. Louis is just one of many animals we’ve seen neglected, abused and each one breaks our hearts.

People who knew Louis’ story also left a message of disgust, asking what would legally happen to the previous owners.

But the center explained that while it is clear the previous owners did not treat the dog as it deserved, legal action is very difficult. Since then, as with most abandoned animals, it is very difficult to access their past history and attach the necessary evidence.

Having Louis’ story receive so much attention means more people will see the need for proper pet health care and the responsibility that pet owners take on.

Despite all the troubles Louis has been through, the dog has a lot of love to offer his new family.

Louis is extraordinary. He really suffered at the hands of his former owners, but he shows no malice towards humanity. He’s ready to love the perfect family and he deserves one.

Many people around the world were willing to adopt Louis, but the center explained that an adopter was needed in the San Diego area. Well, this way they can reduce the stress of transitioning to a new home and be aware of their special care.

They also explained that their new family must have at least one stay-at-home member and the property must be one story. Also, it is clear that you must have a lot of patience, and do not forget that it is necessary to have a fenced yard and the company of another dog would be great.

Although there are many requirements for adopting Louis, a loving family has decided to make him part of it, which will give him the love and attention he desperately needs. The Walker family, which according to the rescue center, is the perfect family for this dog.

Steve Walker is a Navy Veteran and is blind. The man began to lose his sight at the age of 18 due to an eye disease called retinitis pigmentosa. He has competed in marathons, triathlons and Ironman competitions, according to ABC San Diego.

Steve said he, Kacey Walker, his wife, and Jordan Walker, their daughter, had no plans to adopt a dog, but after hearing Louis’ story, they knew they had to help.

The man said his Los Angeles home is already equipped to help him and will work just as well to help Louis navigate to safety.

We laughed while reading on the internet how to help a blind dog, and it was more or less the same as for a blind person.

In the Walker house, they removed almost all the doors and they have very little furniture, moreover it is a floor; most ideal for Louis.

The family has another rescue dog named “Dragon,” and they hope the two dogs will come to know and love each other like brothers.

After becoming an overnight celebrity, her happy ending will be in the arms of an absolutely loving family.