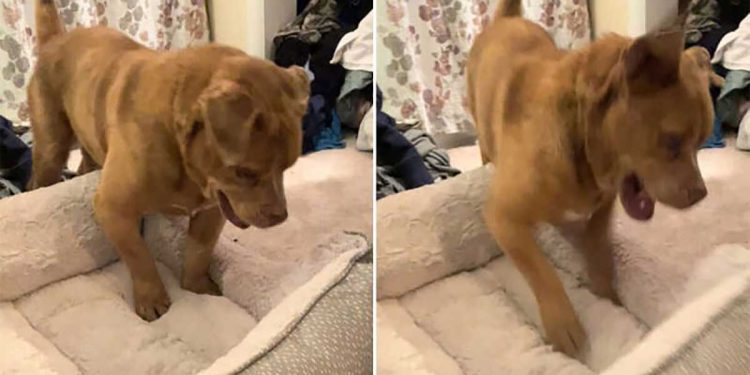 This dog named Stevie, luckily was rescued in South Carolina from a yard where he was tied up and his poor living conditions were noticeable. Everything seemed to indicate that Stevie had probably been chained for the 8 years of his life and had never left this sad place.

The Lancaster County SPCA cared for the dog, but in partnership with other rescue centers, New York’s Diamonds in the Ruff found Stevie.

The organization learned all about Stevie’s story and in that moment they realized he had to be part of her furry family. Consequently, Stevie was transferred to the facilities of the shelter; when he arrived they noticed all his problems and started giving him the attention he needed.

Blind dog can’t believe he has his own bed

Stevie, besides being blind, full of fleas, parasites and missing parts of his skin, had really had a complicated life. Additionally, vets learned that he had a cob stuck in his intestines, which he had to undergo surgery to remove.

His medical issues were all too obvious, but his psychological issues also surfaced when he arrived at his new foster home.

He slept most of the way home, but was starting to growl and bark occasionally in his crate. We knew he was just protecting himself. When we got home, we put the cage inside and he didn’t want to come out. We were careful because he couldn’t see and we didn’t know him yet.

His foster family had to be patient with him, waiting for him to adjust to his new life indoors.

After a few days Stevie began to heal physically and emotionally so he started showing his true personality and became a strong dog.

His new family was thrilled to see him experience many new things, and they even gave him his own bed.

As soon as he felt how soft his new bed was, Stevie was overjoyed and started jumping for joy. Since then, whenever Stevie comes across a dog bed, he goes through her hopping routine to check for comfort and softness.

The puppy is so excited to meet soft and cozy things that he has to show everyone how happy he is when he feels it.

He jumps a lot, sometimes he bites a little bit and then he collapses.

Although he cannot see, Stevie has adapted well to his home and his family members are impressed with his progress.

The little dog is smart and knows its way around your home, moving easily from the garden to the garage or elsewhere.

He knows to expect a snack in the kitchen when he walks in, and he knows to jump on my little ottoman to get on my bed. She sleeps a lot but loves to snuggle, walk around, chew on squeaky toys and give kisses !

Sweet Stevie is currently up for adoption but is looking for a local family who will accept her with her needs and love her forever. It should be noted that he needs a home without other pets and to have someone who spends a lot of time at home so that he can give him all the attention.

Stevie has been through a lot of sad things in his life, but now he knows he’s safe and just needs the love of an eternal family.

If you are interested in adopting Stevie, you can contact Diamonds in the Ruff for more information.