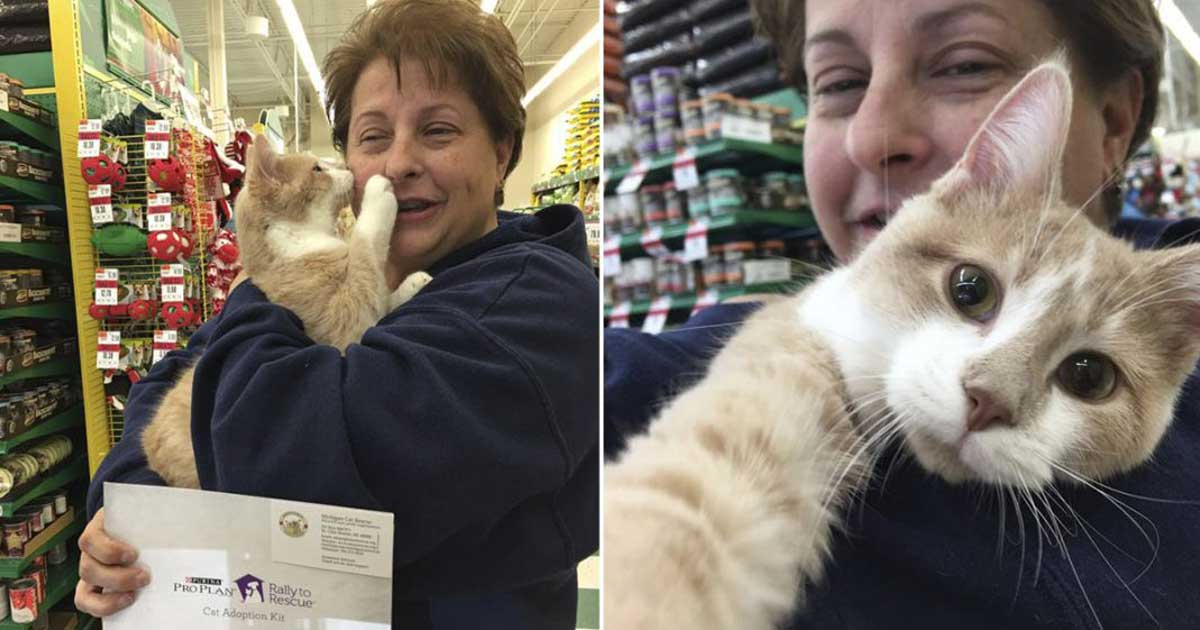 A rescued cat is happy to be able to reunite with a mother forever, so much so that he showed it to her by hugging her and licking her face when he met her and, so far, he has never ceased to show him all his affection and gratitude.

The red-haired feline named Honeycake, had a rough start in his life, managed to survive a rather cruel event on the part of his previous family. When he was just a kitten, his owner put him in a trash bag with his little brothers, then threw them out of a moving car.

Fortunately, a Good Samaritan observed what was going on and helped the kittens, picked them up and took them to a local shelter.

Rescued cat happy to have a home forever

However, the shelter where the kittens were taken had a deadline for their adoption, otherwise they would be euthanized. Michigan Cat Rescue, a local animal rescue center, learned of the kitten’s plight and decided to save it to give it another chance.

They took him to their facility and began to find the perfect home for Honeycake, who was very grateful to his rescuers.

Every day, the beautiful redhead patiently waited for the appearance of someone special who would decide to bring him home and give him a better life.

After spending a few months in the shelter, what she longed for finally appeared, a nurse named Renee found the sweet Honeycake. It didn’t take long for the woman to realize that it was the right cat for her and decided to bring him home.

Honeycake seemed to know what was going on and decided to snuggle up to her, hug her and lick her all over her face, showing her appreciation.

Today, Honeycake starts his new life with a SPECIAL person named Renee. Renee is a very nice woman and she said from now on, Honeycake (renamed Finnegan) will receive nothing but lots of love and kisses

The kitten landed on her arms and did not want to let go; He had chosen her as his human and Renee fell completely in love with him. Now Finnegan has been with Renee for over four years and the couple still manage their beautiful manners and are very happy.

This boy still loves to hug his human mother, it is his favorite pastime, but the most important thing is that he has found a home.

Thanks to everyone who helped save Finnegan, he can now enjoy his new life, forgetting his sad past.

The sweet cat will continue to enjoy his life for a long time, accompanied by his beloved mother Rennee, who always takes care of his well-being.

Michigan Cat Rescue has worked for the welfare of animals in need for many years. If you want to support them, you can do so through their website.