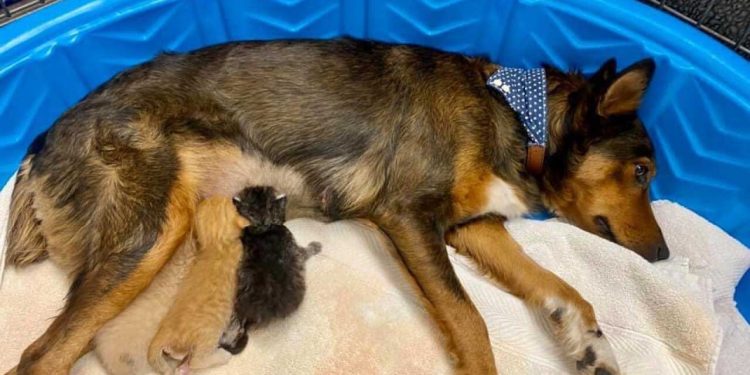 The rescued dog lost her babies, but took care of three kittens who needed a mother to thrive.

A dog they named “Georgia” was found alive at a gas station near the US-Mexico border at Rocky Point. The Phoenix-based Sunshine Dog Rescue team found her and took her to their facility.

They discovered that Georgia was pregnant, but unfortunately none of the puppies survived. All were born prematurely, reports abc Arizona.

Anita Osa, founder of Sunshine Dog Rescue, said Georgia was heartbroken and sad after losing all of her babies.

I have never seen a mother lose an entire litter before. The best way I could describe it was that she was frantic. I was so sad, I was looking for these babies. She broke the baby mattress on which we had her set up, trying to find her babies.

Hoping Georgia would begin her physical and emotional healing process, Anita appealed for help on social media, looking for any animals in need of a nursing mother.

That’s how they found a trio of newborn orphaned kittens who desperately needed a mother to help them thrive.

Anita initially wondered if a dog would accept kittens, but was surprised to see the instant bond Georgia formed with her three foster kittens.

I introduced them gently. I took one first and let her smell it, and she seemed to accept it, so I brought the others. It’s amazing how instantly he calmed down. I think the kittens have no idea that Georgia is a dog.

Georgia even allows her kittens to feed, even though her milk supply is low.

She breastfeeds them. She cleans them and everything, but the bond is strong. It’s really something to see, she protects these kittens as if they were her babies.

Georgia is happy that these three felines have entered her life, after all the pain caused by the loss of her young.