Rescue Dog Never Had His Own Garden, So His Mom Built One For Him 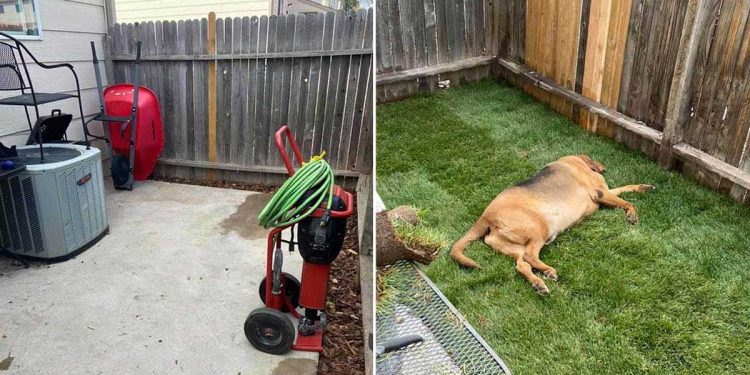 Bentley, a rescue dog who was fired four times for health issues, has found a forever home and yard of his own.

Bentley is a rescue dog who had been adopted four times before, but due to his health issues and anxiety, people decided to send him away. Katarra Taylor, determined to adopt the dog, knew that even though Bentley had many medical issues, he deserved the opportunity to have a happy forever home.

Together they were able to resolve many of his anxiety issues, and although he is not yet healthy, each passing day is improving in a positive way.

His new adoptive mother is very happy with Bentley, and regardless of his complications, she totally loves him and wouldn’t change him for the world.

A rescued dog has his own garden

When she adopted the dog, she was living in a small apartment, she was aware that she didn’t have enough space for him, so she looked for a home. The adopted dog was large and weighed nearly 120 pounds, so a home with good space was needed for him.

I ended up buying a house so we could stay together. It had an enclosed cement patio that you might like. I didn’t have the budget for a house with a big yard, but I thought I could transform it. enclosed space into a small yard with proper assistance.

Whenever Bentley and his mother went to the park, he really liked hanging out on the grass, so Katarra wanted the yard to have grass.

The task seemed difficult, but with the help of her boyfriend and a lot of work, they transformed the small patio into the perfect space for Bentley.

I finally made the decision to convert the place. My boyfriend Nick was able to do it all in one day for less than $400.

She was thrilled to show her dog the end result and hoped Bentley loved her as much as she wanted. Katarra took her pet outside and as soon as she saw her new grassy yard, she didn’t hesitate to pounce on the grass.

It was then that she realized that she had made the right decision and that all the work she had put in had paid off.

Bentley immediately went to bed and stayed there for several hours. He seems very content with his resting place.

Since then, Bentley likes to lie on his lawn all the time and it has become his favorite place. After everything the dog went through early in life, having his own yard made him a happy dog.

Now Bentley has a place of its own, and a loving forever home.