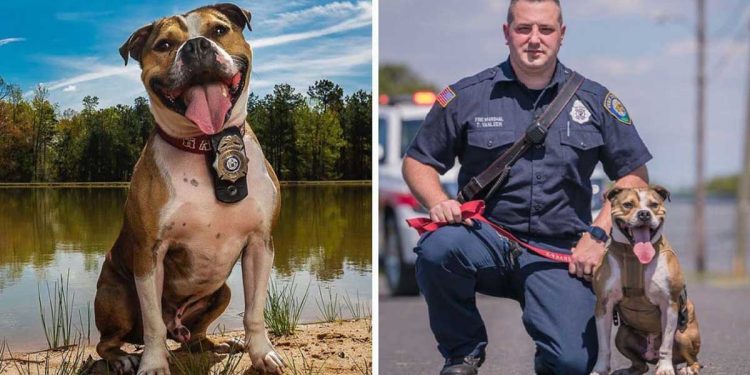 There are many stories about very painful situations that unfortunately a large number of homeless animals must face. Sometimes it is hard to believe how cruel a person can be to other living things. So, it is so rewarding to share some good examples, hopefully they will inspire others to do good.

While some people show only cruelty, others struggle to fight it all by showing love and care for our furry little friends. Without a doubt the story of Hansel, a charming pitbull can reflect all this positivity when a kind-hearted person offered him a second chance at life.

Hansel was rescued from fighting in Canada, along with 30 other dogs. This boy was about to be euthanized due to Ontario’s ban on Pit Bull dogs.

Luckily, thanks to the intervention of a man named Rob Scheinberg, who defended the lives of these dogs and was in charge of convincing the court to change their decision and give these boys a second chance in society, the story of Hansel and many others had a big change.

The dogs were transferred to the Dogs Playing For Life rescue center, a non-profit organization in Florida, United States. There they focus on improving the quality of life of animals in shelters.

In Florida, Hansel had the opportunity to be adopted by the Throw Away Dogs Project of Philadelphia, where he trains dogs to become K-9 officers. After spending a year in training, the dog joined the Millville Fire Department, where they needed an arson dog.

Hansel is the first dog of his breed to become a fire detection officer. This boy is specifically trained to identify flammable liquids like gasoline and diesel. Even thanks to his excellent work, he received the 2021 Law Enforcement and Detection Hero Dog award.

Thanks to Rob’s initial efforts to save the lives of these animals, now even other departments have shown great interest in accepting rescued pit bulls as arson detector dogs.

Hansel has not only helped his team with fire management, he has even found a great friend there, firefighter Tyler Van Leer, his guide in the fire department. This couple has become a great duo and they are the best in their field.

Tyler has a great affinity for his co-worker, they have become great friends and even often enjoy great adventures outside of work.

In one of his interviews, the firefighter said:

He is an amazing dog. He would not ask for any other dog.