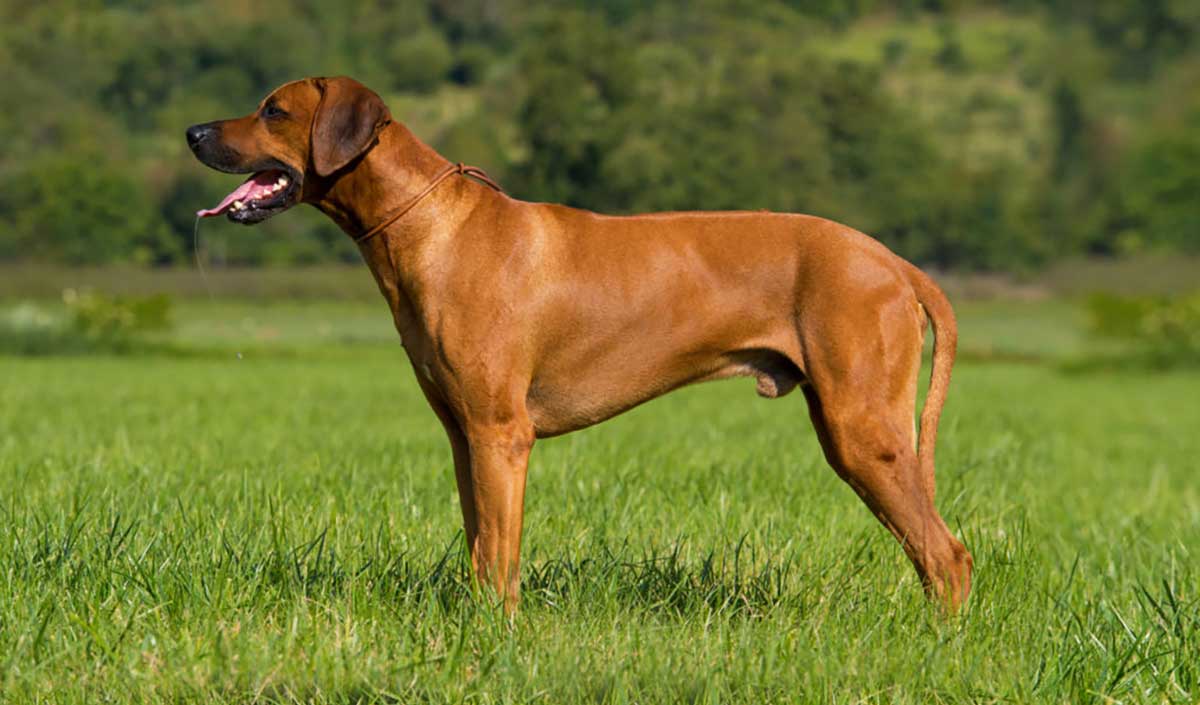 The Rhodesian Ridgeback breed is worthy of respect for its strength and courage. After all, these dogs are ready to fearlessly rush into battle with the lion itself. Therefore, the second name of the Ridgeback is “African lion hound” or simply “lion dog”.

Rhodesian Ridgeback dogs are very popular in their homeland. In Africa, they are still used as hunting dogs and are indispensable safari participants. In other countries, representatives of this breed are in most cases kept as companions, guards, watchdogs and police dogs.

Once the Rhodesian Ridgeback participated in the lion hunt, now it is mainly used as a guard dog

The distant ancestors of the modern Rhodesian Ridgebacks lived in Africa from the very beginning of our era. It is known that the first owners of such dogs were members of the Hottentot tribe. The specified tribe lived in East Africa and on the territory of the state of Zimbabwe.

It was in Zimbabwe (Rhodesia) that the formation of the Ridgeback breed took place, hence the name “Rhodesian”. The birthplace of the breed is the South African Cape. Local farmers needed a dog capable of hunting large animals, even lions.

It was supposed to be a versatile dog that was not afraid of extreme African temperatures and lack of water. In addition, the representatives of the new breed must be adequate companions and guards of the owner’s property.

To achieve the set goals, breeding work was carried out, as a result of which the Rhodesian Ridgeback was bred. In the process of work, the crossing of semi-domesticated Hottentot hunting dogs with a ridge on their back and European hounds that came to Africa with immigrants was carried out. It is also known that in the blood of the Rhodesian Ridgeback there are genes for Mastiff, Greyhound, Great Dane and Bloodhound.

The work of the breeders was crowned with success. At the beginning of the twentieth century, the Rhodesian Ridgeback breed gained immense popularity not only among lion hunters, but also among farmers. In 1900, the first official kennel for lion dogs was registered. In 1922 the breed standard was approved.

Characteristics of the Rhodesian Ridgeback

The Rhodesian Ridgeback is a powerful, muscular dog, but not heavy. His posture is noble, the physique is harmonious. The appearance suggests that the dog is confident and fearless. The weight of adults is 32-41 kg., The height at the withers is 61-69 cm.

A head with a flat skull, without wrinkles, rests on a long neck. The ears are not too large, drooping, set high. The color of the eyes depends on the color of the coat (dark or amber), the shape is round. Studying look, attentive.

The muzzle is long. The nose may be black or brown depending on the color of the coat. The jaws are powerful, the canines are large, the bite is scissor.

The back is powerful, the loin is slightly arched. The chest is deep, the forbrust is well developed. Legs are straight, strong, muscular. Paws are compact with dense round pads. The step is springy. The tail is slightly curved upward. A tail twisted in a ring is not allowed.

In describing the exterior of the African lion dog, special attention should be paid to the main features of this breed. It is a ridge, in other words, a ridge that runs along the ridge line. Its absence is considered a big disadvantage.

The ridge is a strip from the tail to the neck. On this strip, the coat grows in the opposite direction to the main coat. Such a ridge should be clearly defined. Ideally, its width is about 5 cm.

The Rhodesian Ridgeback is a short-haired breed. His coat is close to the body, smooth, not rough to the touch.

The color is allowed red of different shades, from light to red-red. Small white patches on the chest and fingers are not considered a fault. There may be a black mask on the face.

Character of the Rhodesian Ridgeback

The Rhodesian Ridgeback is a strong and powerful dog that can be determined and stubborn. Although it is rather calm and confident at home, it is also very careful with strangers. This is not a breed recommended for beginners: it needs an experienced owner to care for and train it, as well as an early and conscientious socialization.

This dog owes much of its character to its hunting dog past. It is a curious dog, very loyal and energetic, sometimes independent or reserved for foreigners. To avoid aggressive behavior or related behavioral problems, it will be very important to socialize the puppy.

The Rhodesian Ridgeback is usually a dog very attached to its family, with whom it creates a very strong bond. The treatment with the children is excellent, but because of its energy level, it can be difficult to treat it. Of course, it’s a very protective dog.

The Rhodesian Ridgeback loves to run, jump, fool around, but not wallow in the mud – he is very clean

The main feature of the Rhodesian Ridgeback is precisely the crest of its back. The truth is that this detail is an anomaly of the fur: some hairs grow in the opposite direction and offer the appearance of “crest”. However, this feature makes the breed prone to the spinal sinus, a congenital malformation.

The spinal dermal sinus is present from birth and if the dog suffers, it is possible to observe a small fossa in the spine. A lumen is usually seen, but vascular lesions and suppuration may also occur. This condition can cause more serious health problems and requires surgical treatment.

Other hereditary diseases of the Rhodesian Ridgeback Dog are:

It is advisable to consult the veterinarian every 6 or 12 months to quickly detect any health problem and carry out basic follow-up tests. It will also be essential to follow the vaccination schedule and regular deworming, both internally and externally.

The life expectancy of the Rhodesian Ridgeback dog is 9 to 15 years.

The Rhodesian Ridgeback does not tolerate the cold well. It is not surprising, because this dog is from hot Africa, it is easier for him to endure the heat than the frost. His coat without an undercoat cannot protect against cold temperatures. Therefore, keeping a ridgeback on the street is not recommended, unless you provide your pet with an insulated booth and a spacious aviary.

In a cramped apartment, an active lion dog will also not be comfortable, since in such conditions it is constrained in movement. The ideal option for keeping in this case is a private spacious house with a fenced garden plot.

While walking in crowded places, such a pet cannot be released from the leash. The Rhodesian Ridgeback takes small dogs, cats and other small animals for game and can start hunting. With large, similar dogs, he will try to get involved in a fight.

You need to find an opportunity to take it out into nature, for example, in a forest or grove. In a deserted area, the dog will be able to run a lot.

During the cold season, the Rhodesian Ridgeback will need clothing. When going outside in frosty weather, dress him in overalls or other special clothing for dogs.

The Rhodesian Ridgeback can live both in the yard and indoors – he is not afraid of wind, heat, rain, but in cold weather he needs clothing

Caring for the appearance consists in simple procedures, these procedures not only promote beauty, but also maintain the health of our Rhodesian Ridgeback:

Such a wayward dog as a Rhodesian Ridgeback must be taught to the above procedures from puppyhood. Otherwise, it will be difficult to cope with leaving.

A fairly large and active Ridgeback spends a lot of energy, this is good for him, but provided he has a proper balanced diet.

When compiling a diet, the owner should take into account that a Rhodesian Ridgeback dog often has digestive problems. Also, the ridge is prone to gluttony. If you do not regulate portions, your dog will quickly gain weight, leading to health problems.

You can feed the representatives of the breed with high quality dry food or natural products. In the second case, meat products make up 50% of the total diet. There must be vitamin and mineral supplements.

It takes a strong will and desire to raise a Ridgeback. But you should not expect that even after successful training, the ridge will become an obedient slave – he is independent

The Rhodesian Ridgeback requires between 2 and 3 daily walks to maintain its muscles. It is also indicated that it can exercise at least once a day. In addition to classic games, such as the ball, we can also introduce the dog to agility, running or other activity promoting muscle development.

It will also be interesting to enrich your dog’s daily life with games of intelligence or reflection, for example.

Large breed dogs, in addition to having a great appetite, need a different nutritional balance, including minerals and vitamins, than smaller dogs.

Remember that if the level of activity of the Rhodesian Ridgeback dog is very high, it will need a specially formulated diet for sporting dogs or an increase in its daily amount.

The Rhodesian Ridgeback is prone to swelling and suffering from stomach problems. Providing less abundant and more frequent meals can minimize this risk.

The African lion dog is distinguished by waywardness and stubbornness. He is smart, learns commands quickly. Therefore, it is not difficult to train him, if only the trainer is a strong, strong-willed person, able to insist on his decision.

The Rhodesian Ridgeback needs training. It is recommended to start training it as early as possible. From puppyhood, the owner must teach the ridge to obedience. In the educational process of such a serious dog, rigor is necessary, but not rudeness.

From birth in the blood of a Ridgeback is the independence and passion of a hunter, a fearless fighter. To raise an adequate, obedient dog from such a puppy, it is imperative to undergo a general training course under the guidance of an experienced dog handler on a special site.

If the further purpose of the lion dog is to hunt wild animals, separate training will be required. In this case, the owner needs to take care of the training of the dog for hunting.

Rhodesian Ridgebacks did not pursue prey alone when hunting lions or other wild animals. These were several lion dogs, which, having overtaken the target, skillfully stopped it and held it until the hunter arrived.

The only South African dog breed recognized by the ICF is the Rhodesian Ridgeback.

The Rhodesian Ridgeback is completely unsuitable for weak-willed people who have no experience with large, wayward dogs of people. A lion dog can only become a pet for a strong, strong-willed, self-confident person who knows how to behave with such animals. Below are the main pros and cons of the African Ridgeback.