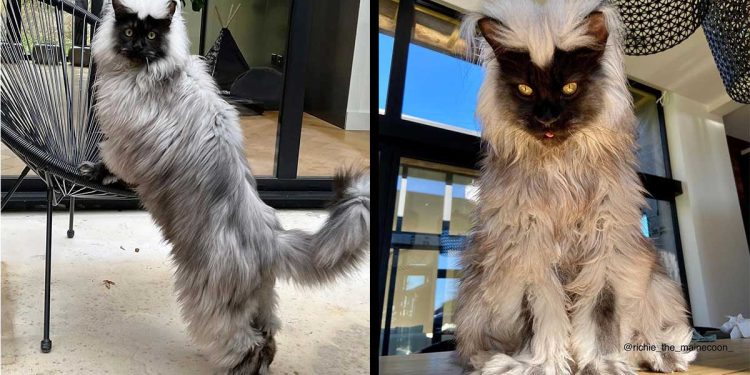 Richie, the Maine Coon cat, has become very popular on the internet thanks to the extraordinary and majestic appearance that his fur gives him.

Richie is a truly amazing feline as he always seems to wear a very bulky fur coat over his body and has been referred to as a lemur or a yeti cat by netizens. The charming cat is just over a year old and it didn’t take long to gain popularity on social media, as his mother has always shared photos and videos on her Instagram account where you can enjoy his antics and of his adventures.

The cat’s mother, Adriana Piraino, who lives in Europe, told Newsweek she got Richie from Catterie du Mont d’Even in France. The woman, a make-up artist, remembers that the feline was only 4 months old, and that even at this young age her fur was impressive.

Richie already had a lot of hair at that age. But people became interested in him when he developed his fur. His coat grew in a few days. Like a coat around her, she turned into such a strange animal That cute. He started going viral on social media. People went crazy for him.

Adriana says she became interested in Maine Coons after losing her two cats two years ago. She explains that Richie is a black smoke, a variety of the Maine Coon breed that includes shades of blue, red, and cream.

Beyond his physique, he has his personality. Intelligent, curious and playful like a dog-cat. He follows me everywhere, I work from home, he’s my life partner. He loves humans like he loves babies.

Like my fans, I’m so amazed at how Richie has grown. I have never seen a cat like that. People ask me a lot of questions, but I don’t know exactly how and why Richie is like that. Now my vet recognizes Richie as a pop star. The vets are looking into it. I believe he is the only Maine Coon with such fur.

Richie has a unique look that has earned him millions of fans around the world, everyone is waiting to see Instagram posts showing a bit of his adventures, racking up thousands of likes and comments.