Rottweiler Adopts Homeless Pup And Raises Him As His Own 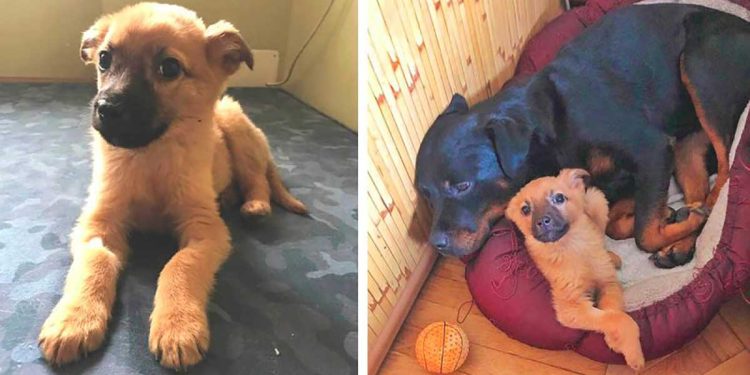 Rottweiler adopts a homeless pup who was rescued from the cold on the streets. She takes care of him and raises him as if he were her own.

A local rescue organization in Ukraine recently received a call about an abandoned puppy, so staff rushed to the scene to try and rescue him from exposure to the weather. Two members of the rescue center searched everywhere for the puppy; They desperately scoured the entire area, hoping to find the homeless pup before it was too late.

According to Project Ron, volunteers found the dog shivering in a corner and immediately rushed to pick it up. Immediately, they covered him with one of the coats they had brought with them, seeking to give the pup some warmth.

They immediately went to the veterinary clinic to take care of the little boy, as soon as they checked him, they discovered that his temperature was very low and he seemed very weak. Staff at the veterinary clinic gave him intravenous hydration to replenish some of the fluids lost during this time.

Volunteers at the rescue center decided to leave him at the clinic, confident that, in the capable hands of the staff, the little homeless pup would recover and then be transferred to a foster home as soon as he was safe. of his ailments.

The pup was soon ready for a second chance at a new home. Once there they named him Archie, the little boy had a big appetite and quickly started gaining weight. In addition, he quickly made friends with the other dogs in the family.

Unknowingly, Archie had also been adopted by the canine family; a rottweiler named Remy, followed Archie everywhere, making sure he was safe and didn’t do anything wrong. Plus, she was ready to give him all the love the little boy needed to move forward.

The bond between Archie and Remy has grown stronger over time. The Rottweiler is a devoted mother and loves the adorable rescue pup with all her might.