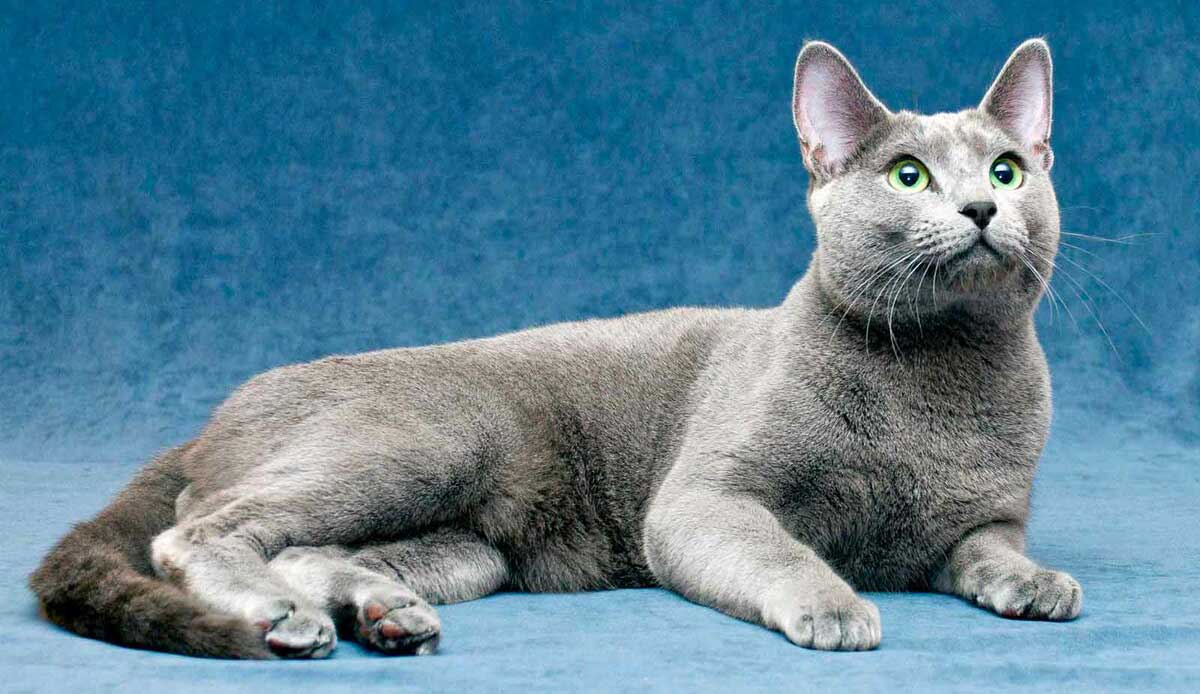 The Russian blue cat is without a doubt one of the most popular and most beautiful cats. He is a cat that loves his humans very much and likes to play. Of course, he is not one of those who go to the feet of strangers. He has a shy and distrustful character with people outside his circle, but it is only a matter of time before he gains confidence and becomes your best friend.

The elegant and slender Russian blue cat resembles a ballerina. This cat is graceful and light, distinguished by aristocratic manners and special flexibility. This is the most popular shorthaired cat breed in the world. Over the years of living in city apartments, he has not lost his hunting instincts. The avid hunter is curious and independent. But he doesn’t like being alone.

If you are thinking of adopting a cat of this breed, it is time to find out about its character, the care it needs, or its characteristics. In this ‘ Pets Feed ‘ breed sheet, we will explain everything you need to know about the Russian blue cat.

The Russian blue was originally called “archangel cat” because it was said that he had arrived in Europe aboard ships from the Russian port of the same name (Arkhangel’sk). It has also been known as “Spanish cat” and “Maltese cat”, especially in the US. Where this last name lasted until the beginning of the century. However, there is powerful evidence linking this cat with Russia. Many cats with similar fur colors have been found in Scandinavia.

In addition, the density of the coat indicates that it belongs to a northern climate. Although the typical color of this breed is blue, there are also black and white specimens. These colors emerged during World War II, when the few specimens of surviving Russian blues were crossed with British blue and Siamese to avoid their disappearance.

The Russian blue cat is never annoying, and does not tolerate violence

Characteristics of the Russian blue cat

The main feature of the Russian blue cat breed is, without a doubt, its fur. Beyond the fact that it is short, very soft to the touch and dense, it has a coat whose coloring is practically unique in all cats. This black or bluish gray which is also used to give a name to the breed itself.

What to take into account is that there is no long-haired Russian blue cat. Its coat will always be short, although the length may vary slightly depending on its type. Another feature that draws attention in this kitty is its intense and deep green appearance. An eye color caused by crosses with other breeds such as the Siamese or the British shorthair and which contrasts sharply with the color of their fur in an impressive mixture.

On the other hand, the Russian blue cat is a medium-sized breed, similar to the other breeds, with a slim and stylized body and a triangular head. It is a strong and robust animal on its legs, prepared for all kinds of exercises. It stands out for its agility and resistance in any activity.

Its ears are held well above his head and are quite large compared to the rest of the body. And it is also worth mentioning a thick, elongated tail that does not lose proportion.

Developed in the United States, this cat has lines that strongly resemble Asian cats. Due to the breed crossing with the Siamese cat. They are stylish and a bit smaller than their European counterparts. They also highlight larger, rounder eyes, lower insertion ears and a silver tone at the ends of the coat which is very marked.

On the other hand, in the European type, three subtypes are distinguished according to the area of ​​Europe. So, you can find English Russian blue, continental and Scandinavian. The differences between them are minimal, especially with regard to size, girth and coat. In general terms, the three lines are larger than the American, although there are variations by subtype. The most stylized would be the mainland, which is mainly found in Spain.

The Russian blue has a highly developed hunting instinct. He catches flies, mosquitoes and butterflies, can watch mice for hours

Behavior and character of the Russian blue cat

The Russian blue cat generally shows a calm character. It is one of these animals that generates a strong bond with his family, by choosing one of the members to be his leader, and it will be with him that he will have the most confidence.

In addition, he gets along well with people of all ages and is very patient with children, although it is always necessary to ensure that children do not play badly with animals. Remember that they are somewhat reserved for strangers, a common behavior in most cats.

With a good education and a good socialization of the Russian blue kitten, it is easy to get him to be also tolerant towards visits. It is an easy to train and very adaptable cat, with an affable and affectionate temperament. He is not the most playful of cats, but he will always look forward to spending time with you and receiving your attention.

It is a breed which is also distinguished by its great intelligence. He is able to learn commands and tricks over time, the Russian blue cat is also able to learn to recognize his name and use different elements, such as the scraper or the sandbox, and he can go further, learn to sit, take toys, etc. For this, we must improve his skills from an early age and stimulate them regularly.

The Russian blue cat is perfectly suited to living in an apartment, provided that it receives constant affection and exclusive playing hours. Loneliness is not a good ally of this breed, which will undoubtedly need a loving and warm family.

The Russian blue cat is a fairly clean breed and is very sensitive to litter box cleanliness. The cat will not walk into an insufficiently clean litter box. He will do his business elsewhere

One thing to note about the Russian blue cat is that it is a very healthy cat in general. However, in samples from inbreeding relationships, it is common to consider congenital diseases, such as hypertrophic cardiomyopathy, polydactyly and other mutations.

The Russian blue cat is also susceptible to contracting infectious diseases such as feline AIDS, feline giardiasis or cat chlamydia, which can be prevented by following certain basic hygiene and care guidelines, such as going to the vet frequently and maintain their vaccination and deworming records.

The Russian blue takes care of his shape, so he regularly exercises

To make sure that our Russian blue cat is well looked after, we will not need many things, regular brushing of the coat will be enough to keep it clean and we will not need to bathe it, unless it be really dirty.

Remember that cats clean themselves and do not need to bathe regularly as we do with dogs. If our cat has learned to use the scraper correctly, we will not need to cut its nails. We will only need to check his ears from time to time to make sure he is not suffering from a mite infestation as well as his mouth and body in general to quickly warn of any problems.

We will choose a quality food and the corresponding gamma (junior, adult or senior) or we can choose to prepare homemade recipes, yes, always by consulting the veterinarian to avoid creating deficiencies in his diet.

Remember that the food provided to your cat will be reflected directly in its coat, much brighter and more beautiful, while directly affecting its health. Remember to place the litter box, the food pan and their bed in very separate areas, as cats generally do not accept that these items are too close.

It is also advisable to get various toys, especially the “fishing rod” type, which is very positive for them, because they interact with us.

Peaceful, kind and obedient, the Russian blue cat has a slightly stubborn character. He obeys only one master and prefers freedom

Composing a diet for this breed exclusively from natural feed is associated with some difficulties.

Difficulties arise with the calculation of the required substances in this type of feed.

But do not forget that food from the table is not suitable for cats.

During games, the Russian blue cat does not release its claws, so you can not be afraid that he will hurt a child

It is strictly forbidden to mate a Russian blue cat with representatives of any other breed!

For violation, if you’re member of a Russian blue cat, you may be expelled from the club and prohibit breeding.

The population of this breed is constantly growing, so finding a mating partner in your region will not be difficult.

Mating of this breed is calm and almost silent. Healthy animals that meet the breed standard are allowed for breeding.

Russian blue females are first knitted at the age of 1.5-2 years.

If you think this breed is right for you and want to buy or adopt a Russian blue cat, you should start looking for a specialist. Because it will be the only one who can guarantee the health of the kitten and its origin.

Forget the price of the Russian blue cat, it will be worth the economic and time investment to obtain a specimen of this special breed and be able to enjoy the best relationship with your new pet.