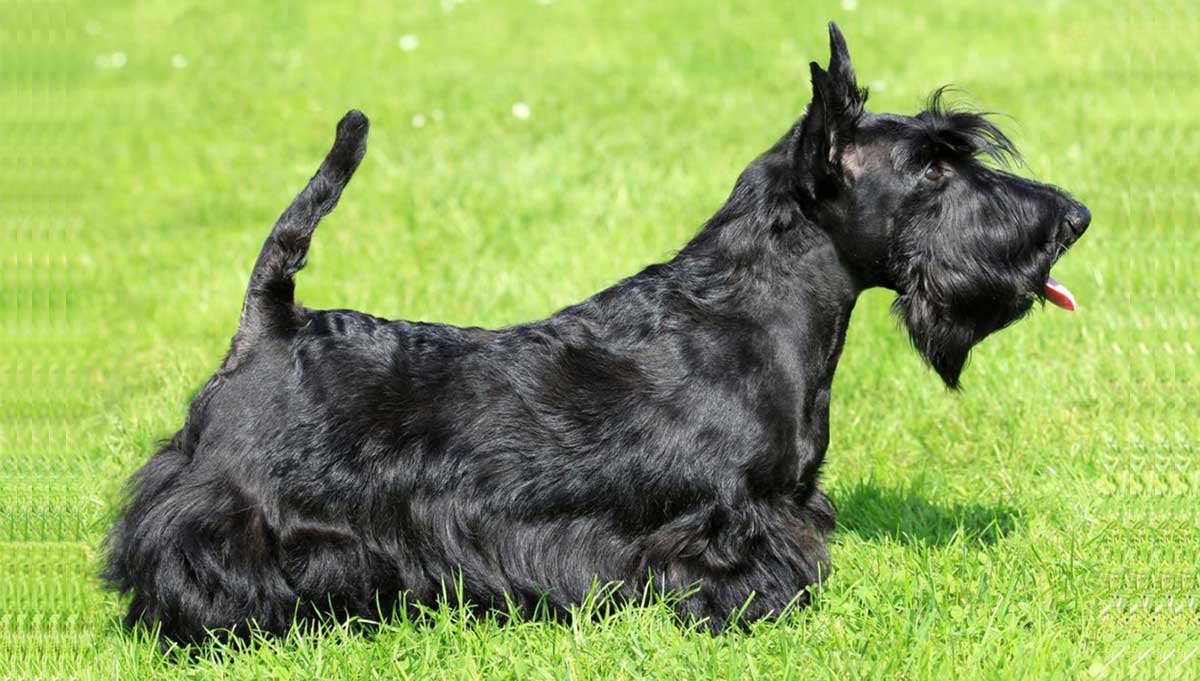 The Scottish Terrier, Scottie, or Aberdeenie, is a small muscular dog with strong bones. Its general appearance is that of a very powerful dog for small size. In addition, his characteristic beard gives a special touch to the face of this dog, with an elegant port.

It is a small dog which comes, as its name suggests, from Scotland, and has a fascinating history behind which we will know below.

The Scottish Terrier is one of the most famous and recognizable breeds. A short, stocky dog with long eyebrows and a beard is not very popular today. Not everyone will like its complex character, and it is not easy to care for long hair. However, lovers of these independent, brave and moderately playful companions with a hunting past will always be found!

In this ‘ Pets Feed ‘ article, we are going to tell you a lot about the Scottish terrier, such as it is a fairly independent dog, and for this reason, it is not recommended that it is not adopted by people. very affectionate or who must be in constant contact with their pets, although that does not mean that we can leave this breed of dog alone for a long period of time.

In the past, all Scottish terriers were divided into only two groups, the short-legged terrier and the long-legged terrier, so that all small breeds crossed. This is a cause of great confusion when researching the origins of the Scottish terrier, and the only thing that is known for certain is that it was used as vermin hunting dog in the Scottish Highlands. Furthermore, he was widely selected to act alone, without the help of farmers, which is why he is now such an independent dog.

By the end of the 19th century, however, a distinction had been made between the different Scottish short-legged terrier dogs and their history is more precisely known. The Scottish terrier was very popular in the Aberdeen area and for a time it was known as the Aberdeen terrier. In 1880, the first breed standard was written and the scottie began to gain popularity on the show tracks.

Between the First and Second World Wars, this breed gained popularity, both as a show dog and as a pet. However, its popularity declined somewhat over the following years. Although not as popular today as it was at its peak, the Scottish Terrier is still a highly regarded pet dog and a major competitor at dog shows.

Physical characteristics of the scottish terrier

The Scottish Terrier is a small but fairly muscular specimen, which gives it a much-appreciated speed.

As for the color of its coat, it can be very varied, ending up with specimens with black, wheat or tabby hairs – in this case, also called brindle, it has harder hairs. There is also the White Scottish Terrier variety, which is widely accepted by pet lovers.

One of its most striking qualities is the muzzle, which is more prominent and elongated compared to the rest of its face.

As for its silhouette, it is a small compact dog with short but robust legs. Her eyes are small and bright, with almond tones.

The ears of the Scottish Terrier should be small, pointed and covered with short, velvety fur.

Its height must not exceed 28 cm.

The coat of the Scottish terrier is very special, so meticulous care is necessary to leave it completely clean.

It must be fixed every week, using a stiff brush, a dog’s glove, a wide-tooth comb for handling the beard and scissors for trimming.

To cut its hair, you should keep in mind that it must be done every two months if you want to keep it in perfect condition, because they will have softer hairs; If you want to leave his hair long, you can cut it several times a year. For this process, you can fend for yourself or go to a dog groomer who does this difficult job.

This dog is courageous, determined and independent, but also very loyal and intelligent. With his family, he tends to be very friendly and playful, although he is independent. With strangers, he tends to be reserved and not easy to make friends, but neither does he tend to be aggressive towards people. With dogs and other animals, however, things are different. The Scottish terrier is generally aggressive towards other dogs of the same sex and tends to hunt and kill small animals. The socialization of this dog must be done from an early age so that it can coexist well with people, dogs and other animals.

Among the most common behavioral problems in this breed are excessive barking and searching in the garden, in addition to aggression towards other animals. These problems, however, can be resolved by giving dogs the opportunity to engage in these behaviors (except aggression) in controlled situations and through solid and consistent training.

The Scottish Terrier has the ideal character to be a great pet of people who do not constantly disturb the dog, but who like the physical activities outside.

In general, Scottish Terrier dogs have good immunity and normal genetics. A little apart are “wheaten”, in which the light color is associated with the risk of deafness.

Another specificity is convulsions, which can appear quite unexpectedly at the moment of excitement and activity. The reason for the phenomenon, dubbed “Scottie Cramp”, is unclear. This is a hereditary disease, but it does not threaten the life of dogs, moreover, it is not associated with pain. However, animals with this pathology are excluded from breeding.

There are also hereditary diseases:

In some lines of Scottish Terrier dogs, there are obstructed childbirth in bitches. The process ends safely, but requires veterinary assistance.

With improper hair care, Scottish Terrier suffer from dermatitis. If you do not cut their claws, problems with the toes and pads of the paws, gait disturbances and pasterns may occur.

Scottish Terrier is not considered an obvious long-liver, but good content allows him to spend an active 10 years and another 3-4 years in the status of an honorary veteran.

You will have to tinker with this terrier. He is a lover of long walks, an adherent of daily rituals and a clear schedule. Scottish Terrier needs to regularly cut his claws, because he cannot grind them off on his own – he does not run fast. Fortunately, he is not picky about food, but rather conservative. He also needs a jumpsuit for slushy weather.

And all would be fine, but wool and a typical hairstyle take a lot of time and money.

Scottish Terrier grooming is one of the most difficult if you do everything according to the rules. If you do it “as it is necessary”, Scottie will look like an old panicle. If you do nothing at all with the coat for a long time, skin problems will appear.

Permanent trimming is the only way to keep your dog attractive, healthy and clean. Beginning procedures at puppyhood. Despite the fact that the first year of a puppy’s life is the most troublesome and expensive time, the temptation to shave the little Scotty with a typewriter must be overcome.

A haircut is a quick and sure way to ruin a terrier’s coat. It is not always possible to correct the situation. At the same time, plucking makes it possible to significantly bring the structure of the guard hair closer to the desired and pedigree, along the way, the color increases.

Owners will be able to learn hygienic trimming only by contacting an experienced hairdresser. It will take at least two sessions to master the initial technique.

A good pedigree groomer works with his fingers and a trimming knife, only cuts the area around the anus with scissors, and he needs a clipper to clean the ears and throat. Furminator is considered not quite suitable for Scottish terrier dogs.

Completely, bald, leaving only the “skirt”, trimming tape is irrational and ugly. It is best to start rolling the coat: dogs are partially plucked once every 2-3 weeks or even more often.

Preparation for the exhibition is real only with a professional. However, the tape will look good in the ring, provided that the visit to the hairdresser was not the only one in six months, and the wool was constantly dealt with.

What a Scottish Terrier owner should do regularly:

All activities are aimed at preserving the density of the coat, elasticity and shine, to prevent overdrying of hair and skin.

As he is a very active and curious dog, the Scottish terrier requires a lot of physical and mental exercise. Fortunately, much of this exercise can be done indoors, as they are small dogs. One or more daily walks, added to certain games with the ball or the push and pull, are generally sufficient to channel the energy of these dogs. If they have the ability to dig, they will, which can also become an activity to release energy if the dog is trained to do it only in one place and on command.

The Scottish Terrier needs a minimum of one hour of exercise per day with as much free time as possible, but only in a safe environment taking care when around other dogs. If he doesn’t get the right amount of mental stimulation and exercise every day, a Scottie would get bored quickly and might even start to show destructive behavior in the home, which is his way of relieving the stress that he feels and not necessarily because he is mean.

That said, Scottie puppies should not exercise too much because their joints and bones are still growing. This includes not letting a dog jump up and down furniture or go up or down the stairs. Too much pressure on their joints and spines at an early age could cause a dog to develop serious problems later in life.

In addition, the Scottish terrier is very independent due to its history as a hunting dog. So it doesn’t need as much companionship as other dogs, but it’s not a good idea to leave it alone for long periods of time. He needs time in the company of quality, without being disturbed, but without being abandoned to live all his life isolated in a garden.

A dog’s health is largely dependent on proper nutrition. In the case of the Scottish Terrier, a full-fledged diet can be provided both with natural products and high-quality ready-made super = premium or holistic food. At first, the puppy is fed with the same that he ate at the breeder. As you grow older, you can gradually transfer your baby to a different diet.

The Scottish Terrier in its current incarnation can only live in the city, otherwise it will say goodbye to a luxurious “skirt”, and even with a beard / eyebrows. Regardless of the specifics of the coat, the tape has a considerable “support group”, and there are those who want to have 2-3 dogs each. Therefore, the breed has advantages:

It is not too demanding on the exercise front.

Scottish Terrier is not suitable for the role of a decorative dog. We must not forget that this is a terrier with a hunting past, the owner of strong jaws and a strong character. It is an intelligent and somewhat unusual companion, an interested environmental researcher with a “civic attitude”.