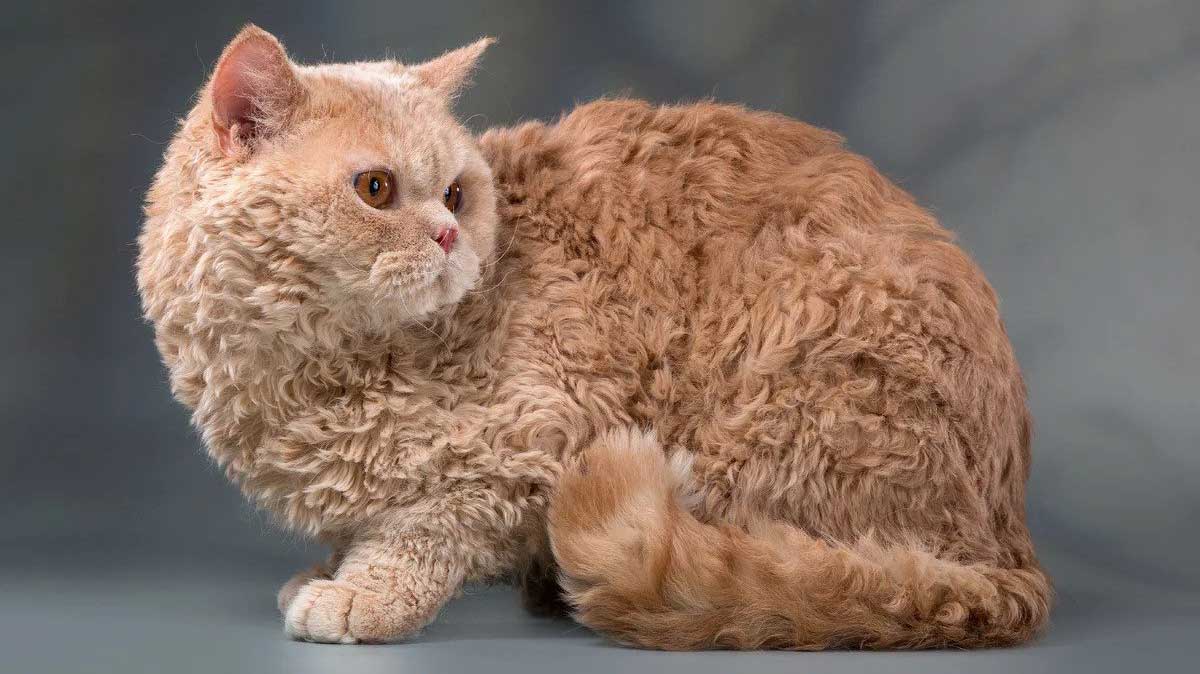 Imagine a cat with an angelic appearance and personality. This is the Selkirk Rex – a young, original and very interesting breed with curly hair.

The Selkirk Rex cat is mainly distinguished by its coat, which precisely gives it the nickname “sheep cat”. We are also talking about one of the most “recent” cat breeds, as developed in the last century.

This breed of cat has won the love and adoration of millions of cat lovers around the world, because in addition to having a soft and tender appearance, it is also distinguished by being one of the most affectionate and playful.

In this ‘ Pets Feed ‘ breed sheet, we will explain everything about the Selkirk Rex cat breed, from its origins to its care, by also reviewing the most common diseases of the breed or temperament. However, it must be remembered that each individual is unique. So, whether you are considering adopting a Selkirk Rex cat, you already have one or just want to know more about this breed of cat, read on!

Physical characteristics of the Selkirk Rex

The Selkirk Rex is a large cat, weighing between 4 and 7 kilograms, some of these cats reach a size which makes them consider as giant cats. Although the average weight of most specimens is between 5 and 6 kilograms. His body is muscular and fibrous, fairly slender but with very powerful and flexible members.

This cat has a medium length tail, ending in a round tip and of considerable thickness. The life expectancy of Selkirk Rex cats varies from 12 to 15 years. The head of the Selkirk Rex is medium, round in shape and has a short, wide and straight snout. The eyes are round and large, the color of which will depend on the color of the dress, with which they will always harmonize. The coat of the breed is the most characteristic of the Selkirk Rex, because this cat has a coat which can be long or short, there are two variants which would be long hair and short hair, all possible colors are accepted.

But the main thing about these hairs is not their length, but the shape, because these cats have curly hair, which can form curls in long-haired specimens. And not only on the body, they have these characteristic curly hairs, but they also have it on the facial area, forming picturesque whiskers of soft, dense hairs.

Wool: thick, soft, splits into separate curls, plush to the touch, as long and curly as possible on the neck and tail.

Ears: The hair curls inside the ears.

Eyes: round, large, widely spaced, any color (regardless of coat color), its saturation is important.

Tail: thick, slightly tapering towards the tip, the tip is rounded, significantly pubescent.

Note! Selkirk Rex cats are considered short-haired, the length of their hair (in the untwisted state) does not exceed five centimeters. On all parts of the body, including the tail, the fur is approximately equal in length.

Temperament and personality of the Selkirk Rex

The Selkirk Rex cat has an attentive and active personality with a soft and engaging character. This gentle breed likes to sit on their knees and likes to be kissed. He also likes to play and is a fantastic companion for the whole family. He is a very calm and peaceful cat, characterized by a calm and balanced temperament.

He is also very affectionate, showing great affection for his loved ones. All this makes it an ideal breed to live with families with young children, because it is a very affectionate and patient cat with the little ones of the house, it also likes to play with them.

Also because of the great tranquility and serenity that it transmits, the Selkirk Rex is very suitable for the elderly, because it will provide them with fantastic company, but without causing problems because it is nervous like the other breeds.

It also adapts very easily to environments of almost any type, so we don’t have to worry if we live in a small apartment or if on the contrary our house is a large house with garden.

Relationships with other animals

Selkirk Rex cats are disposed to compromise and can find common language with almost any pets. They will not be jealous and compete for the master’s love – they will simply organically fit into the pack, no matter who it consists of. Selkirk Rex feel good in a large company of cats of all breeds.

Due to the fact that stray cats were the ancestors of Selkirk Rex cats not so long ago, this elite breed can boast of excellent health. But other breeds, whose blood the breeders poured into the “curls”, shared with them not only beauty, but also bad heredity – genetic diseases that are transmitted along some breeding lines, namely:

Note! Despite popular belief, Selkirk Rex are not hypoallergenic. Allergies in humans are caused by the Fel d1 protein, which is found in saliva and hair and is secreted during grooming. And they produce exactly the same amount as other cats. Some say that people with mild allergies can tolerate them, provided the cats are bathed once a week, wiped daily with wet wipes and kept away from the bedroom.

In general, Selkirk Rex cats are not whimsical in grooming, but since they are purebred cats, they need special care.

Selkirk Rex’s gorgeous, thick, crimped coat should be brushed regularly as they tend to shed profusely. For this reason, allergy sufferers should not start them. Excessive hair loss and strong production of allergenic substances can lead to an aggressive reaction of the human body. They should also be bathed more often than ordinary moors.

Note! In order for the coat to visually have a natural curl, it should be massaged with wet hands after each combing. When dry, the fur will become wavy.

Selkirk Rex cats love to eat a lot and tasty. Therefore, you should not exceed the daily ration. Your veterinarian will help you calculate it based on the age, size and lifestyle of your pet.

Give preference to quality (and therefore expensive) food with a sufficient content of vitamin B, necessary for the beauty of the coat. Choose from super premium or holistic offers from trusted and well-established brands. Judging by the reviews of the owners of cats of this breed, the most popular are the following ready-made super premium food:

However, breeders recommend purchasing the highest quality, professional feeds that belong to the holistic level for the daily Selkirk Rex menu. This is especially important for show animals, as it will help not only to maintain the health of the pet, but also to achieve the ideal state of its coat, which will become the key to winning the cat show.

The ready-made diet is selected individually, when choosing, you should pay attention to the following brands of the holistic segment:

The natural diet of a cat is not food from the master’s table. The correct preparation of a balanced menu from natural products requires knowledge and practical skills. A small predator should get a lot of animal protein every day, which is contained in such “dishes”:

To obtain carbohydrates in sufficient quantities, well-boiled cereals should be introduced into the diet:

Don’t forget about the fiber-rich vegetables – they can be served either boiled or fresh. Suitable for cats:

Fat is also an important part of a cat’s diet. From what products she can get them:

Like many massive, heavy cats, Selkirk Rex cats are prone to gaining excess weight and related problems. To avoid this, you need to strictly observe the quality and quantity of food, as well as feed the pets in fractional portions – three or four times a day.

Note! An indispensable component of the menu is fresh herbs, grown by yourself or bought at a pet store. This is not only vitamins, but also an easy way to clear the lumps of felted puff from the cat’s stomach. For the same purpose, you can give a Selkirk Rex and specialized pastes.

Selkirk Rex cats love to be close to the owner and sleep next to him. But this does not mean that they should not have their own space. Cats of this breed are analysts and philosophers. From time to time, they need to be alone for a little while, rest and recover emotionally. To do this, your pet must have its own corner in your apartment.

Note! Gather your cat’s favorite toys, put a scratching post and a comfortable bed. A couple of cardboard boxes will not hurt either – like all cats, Selkirk Rex love to hide in them.

The Selkirk Rex is one of four cat breeds that have received the prefix “Rex” for the similarity of their fur to the Cornish Rex. The adorable curls appeared on cat fur due to a spontaneous mutation that breeders managed to fix. But only Selkirk Rex cats have a curl gene in the dominant allele. In the other three breeds, it is recessive.

The history of the breed began in 1987. A nondescript-looking street cat, which was deeply pregnant, came to a shelter for homeless animals in the state of Montana (USA). She soon gave birth to kittens. One of the babies was curly and so impressed the shelter worker that she showed her to her friend – the breeder of Persian cats. The blue-cream and white curly hair, named CurlyKew, which became the ancestor of the breed, as well as all her relatives, the breeder took from the shelter and settled at home.

Felinologist Jeri Newman, who devoted a lot of time and effort to creating a new breed, gave her the name … of her stepfather – Selkirk. She renamed the orphanage beauty noble Miss De Pesto and knitted her with her Persians, added the blood of British and Himalayan cats, did inbreeding, achieving a unique coat structure. In record time, the breed status was obtained, and then official recognition (in 1994 – TICA, and in 2000 – CFA).

Until the end of 2010, the inflow of the blood of Persians and Exotics was allowed, and until 2015 – British cats. Now the livestock and gene pool of Selkirk Rex cats are large enough, and the breed is closed, and interbreed mating is prohibited.