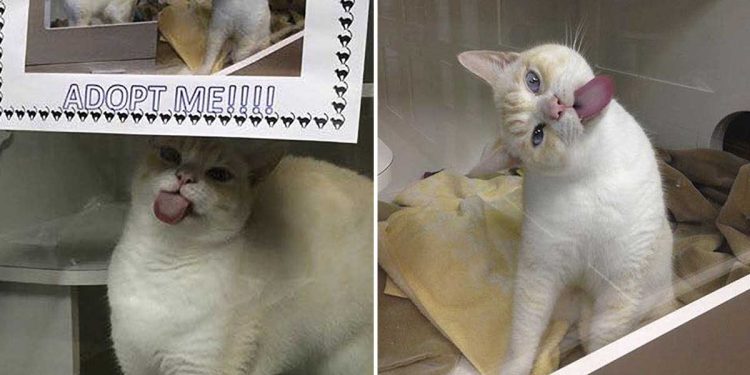 An adorable yet mischievous shelter cat from a shelter creates a unique way to get attention so he can find a forever home.

A 3-year-old shelter cat struggled to find a forever home, but after a long wait, he found a curious way to help himself get adopted.

Sigmund has always been a very playful cat who demands a lot of attention, but his energetic personality seems to make some people uncomfortable. The cute feline was adopted once, but after a few weeks his new family sent him away on the grounds that he was playing too hard.

In fact, all the energetic cat wanted was to have a special forever home and be the center of attention.

Cat from a shelter creates a trick to adopt

The feline had to return to the Cat Haven shelter in Western Australia and continued to wait for the perfect family to arrive for him. Several months passed and no requests came, but Sigmund did not give up and created a special tactic to attract attention.

Sigmund thought that if he could get the attention of people who passed by his cage, it would be easier for him to have a forever home. Since then, Sigmund has been licking the window of his cat cage, as if trying to give passers-by kisses.

The staff were surprised by the cat’s attitude and decided that sharing her personality on social media would help her find a home.

So, they took several photos of Sigmund “cleaning the windows”, and posted them on Facebook in an attempt to captivate people.

Sigmund is adopting some weird tactics to try to find his new owners… it turns out that not only will you adopt a cat, but you’ll also get a window cleaner. If you love him, Sigmund is for adoption.

Soon after its release, Sigmund’s fanbase grew incredibly and fell in love with his pretty face and personality. Soon, a family enchanted by the charismatic kitty contacted the shelter with the intention of meeting him in person.

The family fell in love with the energetic cat and immediately decided to take him to his new home, where he became the new king of the castle.

At 4 years old and after a long wait, the adorable Sigmund had finally moved into his forever home.

In his new home, Sigmund pulls hundreds of pranks, is very curious, and rolls on the bed every time his humans try to put him away.

When he runs around the house doing ‘crazy things’, his tail swells as much as it can. You have to be careful when the Persian style appears. He is very playful and in the morning you find the result of his antics .

Sigmund also has a favorite pastime, and that is playing with his father with a magic wand, he never tires of having fun. The restless feline has damaged many items, but his family doesn’t care and don’t regret giving him a second chance.

Although your cat is very playful, mischievous, curious and very energetic, his family loves and accepts him as he is.

Sigmund used his charm to win the hearts of a family and now he rules their kingdom and he is very happy to do so.