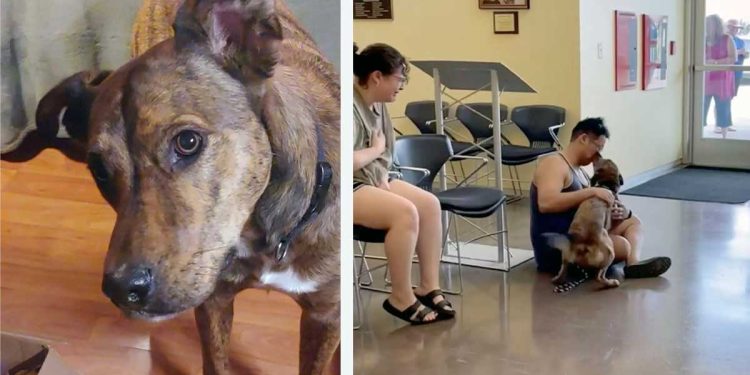 This charming shelter dog bursts with happiness when he finally finds the family, he thought he had lost forever.

Chase was a resident dog at the City of Denton Animal Shelter, where his owners reportedly feared he would never be adopted. Some people saw him running with two other dogs a while ago, and an animal control officer managed to catch him, but upon arriving at the shelter and finding he had no microchip or collar. identification, Chase’s past remained a mystery to his rescuers.

We didn’t know if Chase had ever known the love of a family, and since when he wandered alone. The shelter workers tried to get the dog to trust them, but Chase was reluctant to open up to them.

When Chase first came to the shelter, he was very scared and didn’t want anything to do with anyone. He was very shy and very distant.

Shelter dog bursts with happiness upon seeing his family

When we walked him on a leash, he looked terrified. His tail was tucked in and shaking. When we tried to pet him, he would pull away from us. From the way he acted we knew he would be difficult to have it adopted.

After waiting a few days, Chase was moved to the adoption floor. Misha and the others feared that due to his personality and nervousness he would never find a family. But like all fairy tales, miraculously, his family found him.

Apparently, Chase ran away from home months ago, leaving his family devastated. For months they posted flyers with a photo of their beloved dog and drove for a long time to find him without success.

Because we have such amazing people who [keep] a record of all the lost pets, the owners were contacted last night and after almost six long months they came to the shelter early in the morning.

When Chase saw his family walk through the front door of the shelter, he was completely transformed into another dog. And luckily, Misha captured the emotional reunion moment.

Chase was with us for a week and almost got arrested because he didn’t react to the staff. So, when his dad, Hubert, walked through the front door, Chase instantly turned into a dog happy and excited, wagging his tail, jumping and hugging his dad.

Now the sweet boy is home, surrounded by the love of his family. And for the staff at the shelter, there’s no doubt that it’s times like this that show them that their work is worth it.

There really are no words to describe that feeling of seeing Chase reunited with his family. Everyone loves a good feel-good story, and that is what it is and more.