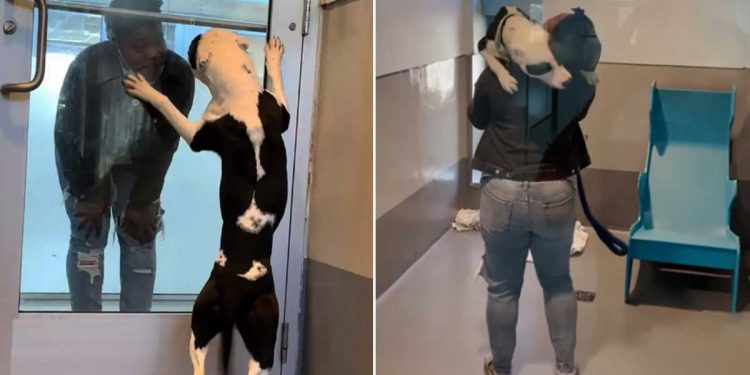 A dog left outside a shelter is delighted to have reunited with his real family.

The adorable dog named Cow was left tied to a fence outside the Louisiana SPCA facility in January, where he got scared and didn’t seem to understand what was going on.

When a shelter worker helped him and brought him inside, he didn’t want anyone to come near him and was still very confused.

He was very scared and growled when he met new people. When they gave him treats and people talked to him like a baby, he stopped. Ever since he was found tied to our fence, his reaction is common.

The shelter dog is happy to be reunited with his family

After a few days, Cow began to adjust to his new surroundings and began to relax with the other animals and the shelter staff. She had been in the shelter for two months, but the volunteers were working hard to find her a loving forever home.

But instead of finding the right family for him, they found something even better, locating a family that had apparently lost him.

Shelter staff realized that Cow had a family and had been desperately looking for him for several months. Apparently, some unscrupulous people had stolen it and somehow it made it to the outskirts of the shelter or was just left there.

Best of all, when Cow’s family learned he had been found, they were so excited and did their best to plan the reunion.

On the other hand, Cow got used to everyone at the shelter because he was a very sweet and friendly little dog and showed his true personality. However, when he saw his mother again, he reached a level of happiness that no one had seen in him in all this time.

Cow was so excited to see his family. He was jumping off walls and wagging his tail like we’ve never seen him before! You could tell by his reaction when he found his family!

After seeing her mother again, she did not hesitate to jump into her arms and melted into a series of wiggles, caresses and hugs.

Cow returned to his family and they were all very happy to have helped make the reunion happen.

The friendly Cow was separated from his family for several months, but when he saw them, it seemed to him that he had never been so long because of his excitement.

Now, thanks to the work of the shelter, he is back with the people he loves and is very happy to be back where he belongs.