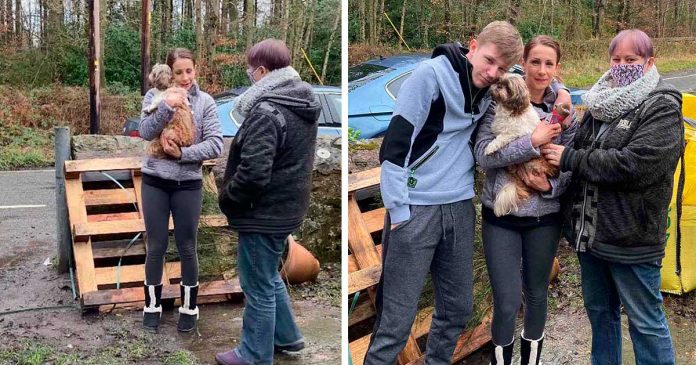 This family is reunited with her Shih Tzu dog who had been missing for just over 8 years, when she got lost in the garden of her house in the United Kingdom

The dog named Roxy was lost a little over 8 years ago, and Magdalena Klubczuk lost hope after a time of searching, after she disappeared from her garden in the spring of 2013 at the age of 3.

According to the Daily Post, Magdalena lives in Connah’s Quay, Flintshire (UK) with her family. The woman recalls that she spent two weeks looking for Roxy, and even called different local vets in the hope of receiving some news about her whereabouts.

Magdalena thought her dog might have died, and after a while she resigned herself to the fact that her darling Roxy hers might not be coming home.

Unbelievably, on New Years Eve around 11pm, Roxy, now 10, was spotted running aimlessly through the streets, and was transferred to Skylor’s Animal Rescue in North Wales, UK.

Dawn Taylor, who runs the rescue center in Dobshill, scanned the little Shih Tzu for an identification microchip and was thus able to obtain Magdalena’s contact details and contact her immediately. She couldn’t believe it was her Shih Tzu that had been missing from her so long ago.

“When I got the phone call, I told them it wasn’t possible. When she explained to me, she couldn’t even speak, I was very surprised. She was totally incredulous. In fact, I told him it wasn’t possible because my dog ​​was next to me on the couch, then I realized he was talking about Roxy!

Roxy spent that night under the care of Skylor’s Animal Rescue, she received food and a check-up to assess her health, during the evaluation Dawn discovered that Roxy has a breast tumor.

For now, the adorable Shih Tzu is staying with her mother’s friends while they can safely introduce her to her family’s six-year-old Staffordshire Bull Terrier.

Magdalena excited to have her lover Roxy back, she said:

«She looks good, but she is very thin. For now, we simply don’t know how severe the tumor is. It was such an emotional reunion, I felt that she recognized me when she saw me ».