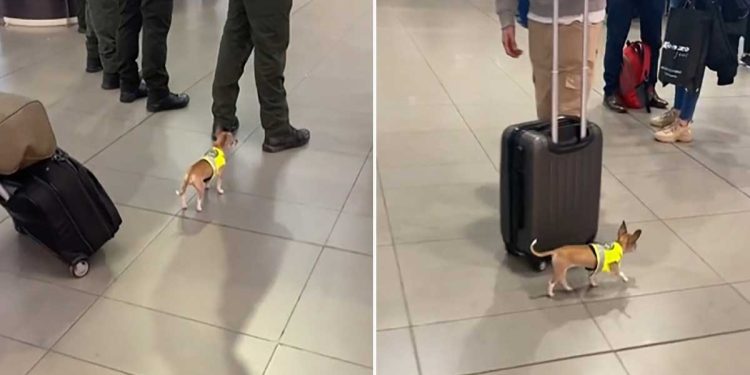 In an airport is the smallest police puppy you have ever seen, but make no mistake because he does his job very well.

People who travel frequently by plane know that being at the airport can sometimes be very stressful, and when you go through the authorities responsible for exercising control and surveillance, everything becomes an anguish and you begin to doubt if everything is in order. Anxiety can appear even more if you come across a huge police dog who can instill a bit of fear in you.

In this airport in Colombia, you can meet this little dog named Chiqui, who calms nerves with his appearance. But don’t be confused, because despite its cute appearance, the little one does its job very well.

So, if there are potential criminals on the go, don’t worry, there’s a new drug-sniffing dog in town.

Although Chiqui is a very small dog, his uniform and his great dedication seem to be the puppy’s most powerful weapons when it comes to serving.

The great discovery began when a frequent passenger, Agata Fornasa, passed through the facilities of an airport located in a city in Colombia.

At this time, the woman saw a group of policemen carrying out their ordinary work, but they were not alone. Beside her was a small drug-sniffing Chihuahua puppy, who sniffed all the suitcases for anything suspicious.

Chiqui wore a vest that identified him as an anti-drug dog and although he was very serious when working, he was always very nice.

Standing next to them was a little dog who started sniffing all the bags. The girls at the duty-free store told me her name was Chiqui and she worked as a drug slut. I thought it was beautiful, so I filmed it.

The woman couldn’t resist and recorded the cute scene on her mobile phone, and there you can see the pup strutting around the airport and sniffing the luggage. At one point Chiqui quit, everyone thought she had found something, but then she continued to do her job like the good anti-drug female dog that she is.

Agata thought Chiqui’s work was magnificent, so she decided to share the video of the puppy on her personal Tik Tok account, which quickly went viral and, in a short time, racked up over 9 million views and more than 650,000 likes.

Apparently, the size of the dog and his adorable nature when doing his job managed to catch the attention of many people.

Everyone who saw him smiled. He was very focused on his work. He was so handsome.

It’s unknown if Chiqui caught a criminal that day, or if he ever did, but what is certain is that he stole everyone’s hearts.