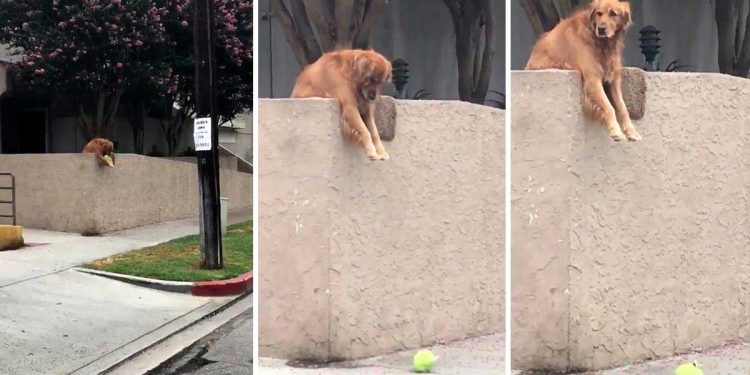 Riley has always been known to be kind and friendly, and it shows every day when he tries to get people’s attention by throwing his ball over the wall of his house so they can play with him.

Riley is a California Golden Retriever who has proven to be very intelligent. In September, local actor Johnny Berchtold managed to capture in a video how he tried to get the attention of passers-by by throwing a ball over a wall, so they could come and play.

This intelligent little dog was adopted at the age of 10 weeks from a shelter in Big Bear because his former family could no longer have him. He has always been known to be gentle and friendly with everyone.

His mother, Wendy Walden, put a box on the patio for him and Riley stands on it every day to walk around the neighborhood of her home in Los Angeles.

It was like paparazzi. People would stop their cars and go out to film him and take selfies with him… They used to film ‘Crazy Ex-Girlfriend’ right next door and it was immediately noticed. I think. that he’s had selfies from most of the team and even one with Rachel Bloom.

People not only love to take pictures with Riley but also hug him and say hello. Every time Wendy surfs the internet, she comes across pictures of her puppy cuddling.

For Riley, everyone is friends, even if they are strangers.

This good wall-doggo dropped his ballo but fear not I returned it to him and thanked him for his service pic.twitter.com/ybsVME5xCp

Everyone adores Riley and he is considered a local celebrity. John Berchtold, shared the puppy’s video on Twitter after he managed to completely steal his heart.

I saw Riley across the street and was obviously in awe of the beauty of the view. I was supposed to film him at the time, and that’s when I realized he had a toy in his mouth. He dropped the ball on the wall, and the video cuts off because I had to return the ball, he was looking at me!

After I gave him the ball back, I shook his paw and rubbed his head, and he seemed to fully appreciate the attention, that’s when I realized it was just a good plan to get that attention.

Riley has been doing this tour for years and his family love that everyone treats him so lovingly, they love to see and hear stories of how he manages to improve the daily lives of people who see him.

This puppy has gained many followers on social networks like Instagram, where he has more than 27,000 followers.