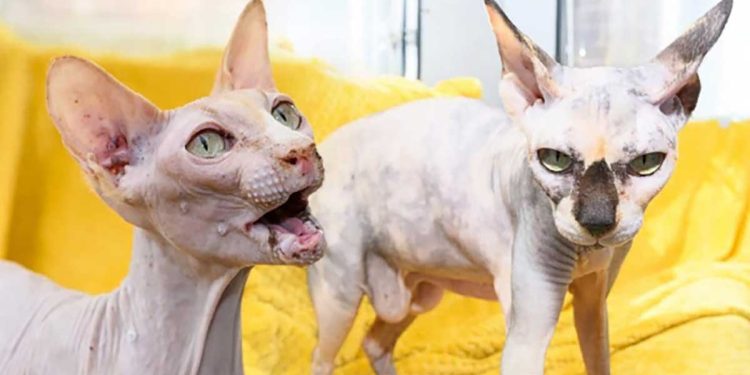 Kiko is an 11-year-old Sphynx cat who was rescued from her owners because unfortunately she was being used as a breeding machine.

After being used as a breeding machine and nearly dying of deteriorating health, a Sphynx cat is rescued just in time, along with one of her children.

The poor 11-year-old cat named Kiko was forced to give birth to and raise around 90 kittens in her lifetime. Which has left indelible marks on his health, and he even has a bag so big the skin is hanging down behind his hind legs.

Apparently, her previous owners forced her to give birth to receive economic benefits and managed to earn around 140,000 euros by selling her kittens.

Sphynx cat rescued after being used to raise 90 kittens

Fortunately, Kiko and Nim, one of her 9-year-old sons, were rescued in time and taken care of by the Fylde Coast Cats organization, located in Blackpool, England.

When they arrived at the shelter, the two cats were very dirty and infected with a highly contagious virus which caused various respiratory and oral diseases. Due to this problem, Nim’s teeth had to be removed, as most of them were in poor condition and did not allow him to feed.

Additionally, both Nim and Kiko have been diagnosed with kidney disease, a condition commonly suffered by abused cats.

Kim Millard, founder of the rescue center, said according to METRO:

Nim’s gums were open and bleeding, and she has a huge hole in her tongue due to ulceration. Obviously the breeder had used and abused it.

Nim is the one with the worst health, as he is extremely thin and cannot eat properly due to pain in his mouth. However, they are both happy to get help and want attention all the time, wanting to receive the love they never had.

Sphynx cats are highly prized by people and often have a high market value, so their owners have taken advantage of them. People often describe this type of cat as a dog-like breed, due to their outgoing and affectionate demeanor.

Additionally, they are completely hairless due to a genetic mutation, but due to their condition, Kim may have difficulty finding them an adoptive home.

But Kim hopes an experienced carer can provide them with palliative care for the rest of their lives.

These cats were bred for the money. They weren’t evaluated for heart or kidney problems. If you have a Sphynx, it will most likely die of heart disease or kidney failure.

Plus, Kim says the big problem is that people are accepting them without properly investigating all the care they need. People just think it’s an interesting item and go out to buy it, like it’s a passing fad.

These cats need to be bathed with care, they have sensitive skin, they get cold easily, they can’t go out much, and they get sunburned.

For this reason, Kim calls on everyone to investigate before buying and thus avoid a case similar to Kiko’s.