Stolen Dog Immediately Demands A Hug When She Finds Her Father 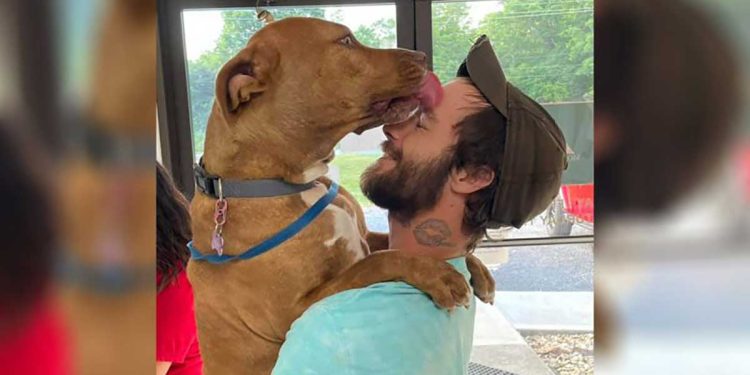 Aaron Morris and his service dog, Jolene, had moved from Michigan to North Carolina in the United States when they stopped at a Dollar General store. Aaron decided to go shopping and left his partner outside while he picked up items at the store. without suspecting that he was being followed by someone.

Leaving the store and returning to his car after a few minutes, his vehicle, along with almost all of his possessions, including his beloved Jolene, was nowhere to be found. In six years, it was the first time he had been without her, and his anguish was enormous.

She was my guardian angel. My best friend. I told her everything. We did everything [together]. I need her back in my arms… It destroys my heart.

Stolen dog demands a big hug when meeting her dad

According to The Dodo, Aaron’s main interest wasn’t the car, his wallet or his phone, for him the most precious thing was Jolene and he wanted her back. His anguish increased as the days passed; Without news of her fate, the man felt he was losing hope of finding her.

Luckily, someone brought a brown Labrador/pit bull mix they found wandering the streets to the Morristown Hamblen Humane Society rescue center in Tennessee.

Shelter staff noticed her collar and the pink tag on her neck. The name tag had the name ‘Jolene’ but unfortunately the phone number on the recording didn’t seem to work.

The shelter therefore decided to publish a photo of the dog on Facebook. Of course, Aaron’s phone had been stolen along with his car, so calls went unanswered, but thanks to the shelter’s social media post, Jolene and her dad were finally reunited.

Anxious and excited, Aaron traveled to Tennessee as soon as he learned his canine companion was there. Once sweet Jolene saw her dad, she wagged her tail in excitement and immediately ran into his arms and gave him a few kisses.

Not content with that, the excited pup wanted to let his dad know how much he had missed him, and surprisingly jumped into his arms for a warm hug.

All the turmoil has finally passed, and now Jolene and her father can continue their life together at home.

I got you. And I’ll never let you go.