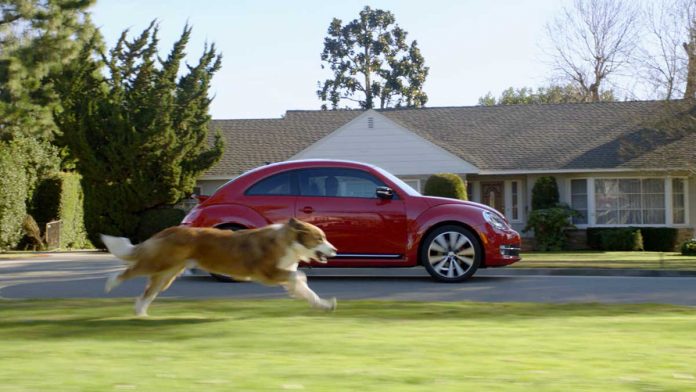 Chasing objects like cars, bicycles, or skateboards is an instinctive behavior in dogs that can be difficult to eradicate once a dog has been performing this behavior for quite a while.

The fact is that practice makes perfect and the more a dog experiences problematic behavior, the stronger the behavior becomes. Problem behaviors can be likened to a weed taking root, becoming increasingly difficult to eradicate over time. The same goes for many other undesirable self-reinforcing habits in dogs such as jumping, chewing on things, running out the door, and running out of yards.

Chasing cars, in particular, can be problematic for various reasons. First of all, if your dog is off the leash when chasing cars, you want to end this habit sooner rather than later because it puts the dog at risk of being run over, injured and possibly killed.

Also, the habit of chasing the car in a dog can be a big responsibility. Drivers can try to swerve to avoid the dog which can lead to collisions. A dog that is hit by a car can also become a bullet and injure others around them.

Dogs that want to chase cars on a leash may be free from many of these risks but they can also encounter many other potential problems. For example, they can suddenly pull towards cars and get injured or they can suddenly throw themselves with all their might and drag owners onto the road in traffic.

Therefore, stopping a dog from chasing cars is important for both leashed and leashed dogs. Here are some tips and guidelines relevant to both scenarios.

The behavior is highly reinforcing because in the eyes of a dog, it often manages to drive the car off its property. In general, the closer to home, the more confident or motivated the dog is to chase cars. As the cars move away from the perceived property, the dog is less eager to continue the chase. Not because the dog is tired, but simply because he has lost motivation or enthusiasm. The car chase, in this case, is often triggered by territoriality and / or the need to feel safe by sending away intruding and unknown cars.

Car chase in dogs can also come from play, as a way to release pent up energy and out of some kind of modified prey drive. Border collies are often seen chasing cars due to their innate predisposition to chase and herd fleeting objects just as they would sheep.

Since chasing cars is highly instinctive and self-reinforcing, going against nature is difficult and the only 100% effective way to deal with the situation is to prevent evidence of problem behavior.

Restricting the dog, then, behind a secure fence (escape-proof should be the key word here, considering a dog may be willing to run away to chase cars) or indoors is important to protect both the dog and the drivers.

Preventing the dog from being general in the first place is therefore the most responsible action, especially considering that, nowadays, in this contentious society, there are always possibilities for costly lawsuits.

Dogs kept free to roam, sadly, tend to get into trouble, engage in self-rewarding behaviors (like chasing cars, barking at people etc.), not to mention the risk of being harmed by strangers or stolen.

In addition to not letting the dog escape, it is useful to train a dog to come when he is not on a leash if he accidentally manages to free himself one day.

If your dog chases cars on a leash, the behavior may be easier to deal with because you have at least some levels of control. Car chase in leashed dogs can often result from a desire to play, as a way to release pent-up energy or out of prey. Some dogs can be very focused on the wheels, trying to grab and grab them as they spin. In some cases, dogs may want to chase cars because they find the sound some cars make as scary or unpleasant.

The best way to deal with the behavior of a dog that wants to chase cars while on a leash is to use systematic exposure and train alternative behavior. In this case, you will need to dedicate a portion of your walks to teach your dog to cope better with the sight and sound of cars without overreacting.

To perform these exercises, it is better to start on a road where cars pass from time to time than the continuous flow of cars and traffic as seen in large cities so that it is clear in your dog’s mind that great things are happening every once a car passes.

For dogs who are not afraid of cars

Management helps prepare the dog for success. Make sure you manage your dog’s environment when you’re not training, limiting exposure to cars, and when you need to train, don’t shower your dog with intense exposure to stimuli.

One of the biggest mistakes dog owners make is exposing their dogs too close to their triggers or progressing behavior modification too quickly. This creates problems and potential setbacks.

Instead, it’s important to start by finding a distance from the machines that your dog can hear and see them from, but not so close that they are over-stimulated and unable to focus. Below are some signs that you are too close to the machines and your dog is at risk of being too stimulated.

You can ask for stationary behavior like sitting down or lowering, but since these are fixed exercises, I’m a fan of them too. It is easy for the dog to sit down and then break the right butt as the car passes or passes. If you choose to do these stationary exercises, you need to make sure you start at a distance and initially provide multiple treats in a row for the duration of the car passing until the car is at a distance. Only once your dog becomes adept at this, can you then start giving a treat to reward the final sitting behavior once the car has passed.

Personally, I prefer to take several attention steps (dog skidding by your side while watching you) as the car goes by because with the dog in motion, you are likely to get a quicker and more reliable response. Movement can help your dog get rid of kinetic energy that would otherwise have been used in chasing. To further drain the energy, you may find it helpful to turn treat delivery into a game where you throw the treat on the ground (if it’s the tough type) for your dog to chase.

Another option is to train your dog to make a “turn” the moment he sees the car and drives off with you.

Teaching “look at that” can also help divert your dog’s attention away from cars. Mark with a clicker or verbal marker as “yes” whenever your dog looks at cars from a distance. At some point, after several tests, you should notice that your dog, after spotting the machines, will automatically look at you for treatment. It is therefore possible to reduce the distance very gradually.

As the dog performs the alternate behavior smoothly at some distance from the cars, the distance can be gradually reduced, but extra care should be taken not to cross the threshold when approaching the cars. If your dog is over the threshold and not paying attention to you and staring at cars, you are too close. Your dog is not yet ready for this level of distraction training and so you will need to increase the distance again until your dog is no longer proficient at that distance before trying again at shorter distances.

For dogs who are scared or anxious about cars

If you think there may be a component of fear at play when it comes to your dog’s car chase behavior, then if so, it’s best to skip asking for specific behaviors like in the exercise above but rather doing raw desensitization and counter-conditioning.

In this case, you will not be asked for any particular behavior. This works well because many fearful dogs are too angry about the cars’ switch over to cognitive function to perform obedience exercises.

Teaching “Look That” can help divert your dog’s attention away from cars. Basically, you clicker or say a verbal marker like “yes” when your dog looks at cars from a distance. At some point, after locating the machines, your dog will automatically look at you for treatment. It is therefore possible to reduce the distance very gradually.

As your dog becomes more comfortable, you can then shorten the distance, but if at any point your dog seems uncomfortable and over the threshold, you need to go back to a greater distance.

In the case of chasing cars out of fear, only once your dog has shown you are more comfortable with cars can you then start asking for alternative behaviors such as sitting, sitting or taking a few attention steps.

Changing behavior involves risks. If your dog has behavioral problems, your best bet is to consult a behavior professional using force-less training methods for in-person assistance and guidance.