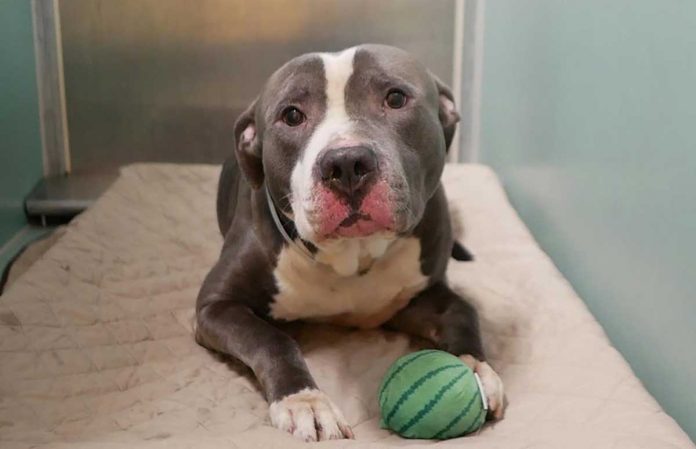 Stormy, a two-year-old pit bull, is the perfect dog. He is friendly, good with children, with other dogs, even with cats. He is kind, loving and playful. But when his old family had a fifth baby, they decided that he was no longer a part of them and abandoned him in a shelter where he could possibly be euthanized.

“She spent her whole life with a family with four children, two other dogs, one small and one large, and a cat. Then the woman got pregnant and had her fifth baby, and she decided there were too many.”

Stormy, who used to be called Freshy, ended up in a high-kill shelter in Brooklyn.

“You could see the fear and terror in her eyes in that image [in the shelter], and you could see how heartbroken she was. I looked at that face, and it completely crushed me.”

Fortunately, Alana saw her profile and rushed her out of the shelter. Stormy had little time to live.

“She was scheduled to be euthanized at 5 o’clock, and it was 4:58 or 4:59 when we received the news that ‘we will let you take her, and she is officially yours and will come off death row.”

So, Alana and her 16-year-old son picked up Stormy and took him to their home in New Jersey, where they will foster him until he finds a forever home.

“She got into my car without problems. My son had gotten into the passenger seat, and he [Stormy] climbed onto my son’s lap, and you could see that with every little wiggle and kiss on the face he was thanking him because he knew he was going to live. He is an angel.”

“I wanted to sit on my son’s lap all the time, so he had to sit in the back seat, and he spent an hour and a half at home on his lap. The only time he took off was the dozens of times he wanted to kiss me too.”

Alana could see that Stormy had lived with a family before, but was surprised to see how kind he was to her son.

“I was wrestling with my son, and my son’s hand got into the dog’s mouth… and the dog’s mouth was open and she slowly drew her head back so she wouldn’t even scratch her. It was then that I knew that I was madly in love with this dog.”

Stormy was also very attentive when Alana’s son was not feeling well.

“She stayed in the room with him all day and snuggled with him. And when my son got up, I was just following him. He just wants to interact with people and be loved.”

She still can’t believe that Stormy’s old family has abandoned him, but hopes that another family will see the treasure that this dog is and give him the home he deserves.

“She’s a playful 2-year-old pit bull. I have to say that it is one of my favorites that I am very demanding, so I need to find the best home.”