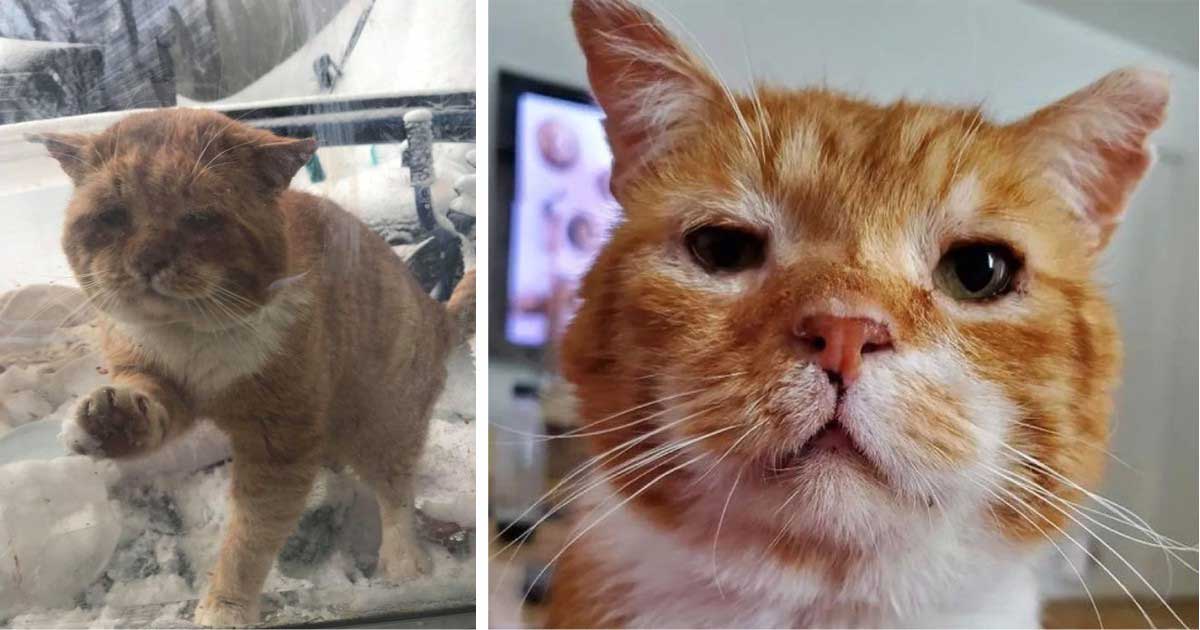 This cat appeared at the back door of a house and fortunately received the help he needed.

One Valentine’s Day, Jaelle, a resident of Quebec City, Canada, was surprised when an orange cat appeared in her backyard, scratching at the door to be let in.

The woman says that in her neighborhood she had never seen the feline wandering around and that her condition moved her.

Jaelle works as a volunteer for One Cat At a Time, so she immediately opened the door for her so that the kitten could enter as the winter was quite strong at the time.

Cat appears in the yard, knocks on the door and asks to enter

The feline was rather haggard in appearance, hungry, dirty, and appeared to be very ill.

She reached out to Marie Simard, founder of One Cat At a Time, to ask for her help. She sent him photos of the animal; she had to try to help him, even though she knew the center was not accepting adult cats.

As soon as I saw the photo, it broke my heart and I told him to take it to our partner clinic for evaluation. His face said everything that had to be said.

After being admitted to the clinic, he underwent a series of tests that determined multiple diseases which should be treated immediately.

He had many fleas, wounds all over his body, bites, rotten teeth, diabetes, and also tested positive for the feline immunodeficiency virus, in addition to some respiratory problems.

But his condition was not an impediment to thanking his caregivers for all the attention he was receiving.

He was very nice to the clinic employees. He would take the vet’s leg out of the cage for people to pet it.

Marie named the cat Aslan, after the lion from the movie “The Chronicles of Narnia.” His matted hair was shaved off and medicated; he just purred while the caretakers did his work.

As the days passed, Aslan began to improve and went to live in a foster home where he became friends with everyone in the place.

A kitten named Cleo, a companion from the shelter, grew fond of Aslan from the moment he arrived. The connection between those two was so great that they never separated and in all the interventions that were made to the kitten, her friend was there to take care of him and fill him with many hugs.

Jaelle, Aslan’s foster mother, didn’t plan on having another pet, but seeing the strong bond that was formed between him and Cleo, she felt that she couldn’t separate them; they made a unique and lovable couple.

Today, Aslan is a gift to this family that welcomed him, he found a place where he is loved, with all the comforts that he always deserved and where he does not have to worry about surviving like he did.