Stray Cat Decided She Wanted To Live With The Humans, They Invited Her Over And Never Left 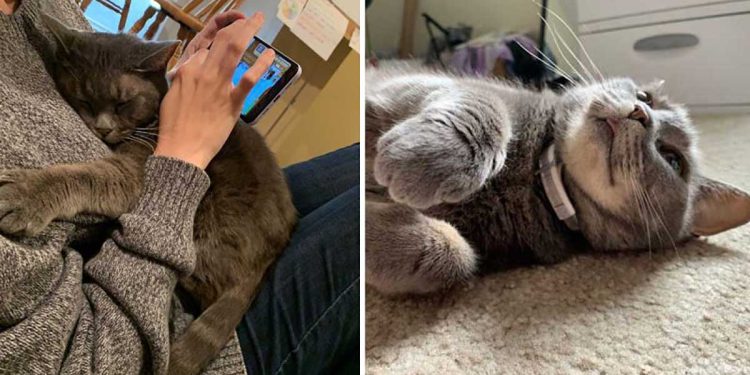 Adorable stray cat decided to live with humans, chose a home, and now has a beautiful family

Cats are mysterious animals that have very peculiar behaviors known as “cat logic”, and in the case of this wild cat, this is even more denoted and clarifies the suspicions that we have always had. Cats choose their home, never the other way around, and we should feel very lucky for that.

Ghost, as this charming kitten is called, was born in a colony of feral cats and when she considered that she wanted to be part of a household with humans, she didn’t hesitate twice and chose her new family determined never to abandon them.

The kitten was completely at ease with her new family, and now she had pleasant massages, delicious meals and many hours of pampering; apparently, he made the best choice to his advantage.

Stray cat decided she wanted to live with humans

A stray cat can become a house cat, but this reflects a major change in its lifestyle. Molly DeVoss, Certified Cat Behavior and Training Specialist spoke to Bored Panda, she runs Cat Behavior Solutions and explains that feral cats develop a certain level of trust with people over time.

A cat’s personality can vary depending on its environment; Molly reports that they range from a truly wild cat, one that has no trace of human social interaction, to an indoor or outdoor cat owned by a neighbor.

Over time, a stray cat may find that a person can be trusted, that they have good food and a warm place to stay, and begin to show their loving appreciation.

A study published in Nature Ecology & Evolution in 2017 suggests that cats lived alongside humans for thousands of years, even before they were domesticated.

According to Claudio Ottoni, from the University of Louvain and co-author of the study:

Not that humans took cats and put them in cages. Instead, people allowed cats to become more or less domesticated.

Although there are differences between domestic and feral cats, they are really minimal, like the markings on their fur; spotted or striped fur did not appear in domesticated tabby cats until the Middle Ages.

According to evolutionary geneticist Eva-Maria Geig, cats have been close to humans without much change. Felines are among the most popular pets in the world, and it is estimated that approximately 74 million cats live in homes in the United States.

Really, whatever the reason that led Ghost to choose his perfect human family, his mother is truly happy and grateful to have him in her life. She is a fascinating and mischievous girl who enjoys the company of her humans.