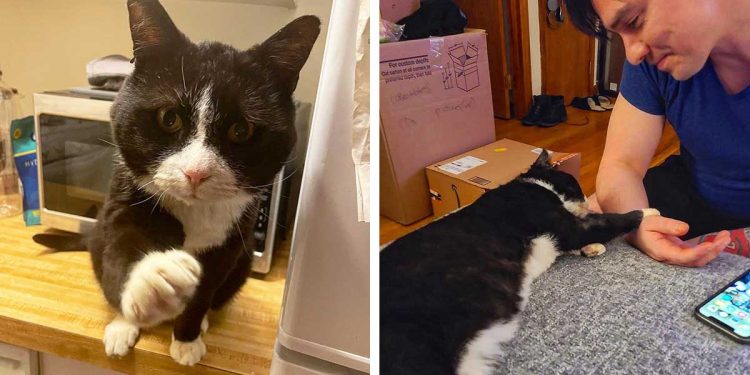 This cat has been through many sad situations on the street. He suffered a lot and decided he didn’t want this life anymore. To change his destiny forever, he became attached to the man who helped him.

It appeared in a park in New York, in the Bronx area. He walked all day, looking for food and avoiding the dangers of the streets. He was thin, abused and showed signs of pain in the skin, ears and eyes.

A local rescuer saw the animal’s plight and tried to help. The man offered a bowl of food. The cat approached and seemed to want to eat, but couldn’t. He looked like his mouth was hurting.

Stray cat doesn’t want to live on the street

He had a severe mouth infection and could barely eat. His rescuer gave him fluids, as he cried in pain trying to eat anything else.

The solution was to seek help from a shelter in the city, informing about the situation of the hairy. The cat was found to be suffering from a serious mouth infection. He was fed liquid food and cried in pain during the process. But it was necessary.

After being fed, he was given the name Andrew and started treatment for the infection. He had to pull out four teeth. For a cat that has lived on the streets for so long, he was receptive to the affection he received.

He was taken to a shelter and got along very well with other cats. Moreover, he looked forward to interacting with the kind humans who helped him. Andrew demanded from them all the affection he did not receive throughout his life.

The attachment was so strong that one of the volunteers temporarily adopted the cat. He finally found a real home. He was no longer on the street or even in a shelter. The volunteer, named Jeff, was Andrew’s favorite person.

Soon after, the provisional adoption became permanent. Jeff could no longer be separated from Andrew, as the kitten also became his favorite pet.