Stray cat takes care of feeding and watching over his friend, a disabled cat 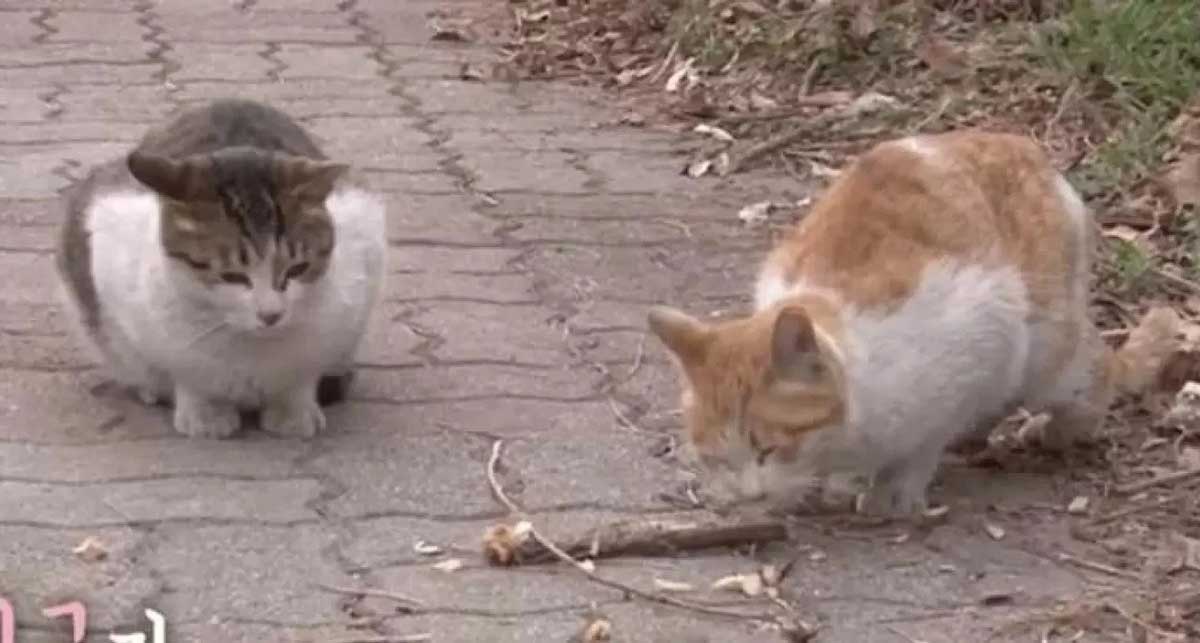 A stray cat can be one of the most supportive and sensitive creatures. He has suffered and lived so much in the onslaught of the streets and homelessness, that when one of his peers needs his help, he will never stop watching over him, offering him love and comfort.

How much love do you think there can be between two animals? You would be surprised how much these creatures can love, accompany and value each other. Today’s story is one that shrinks our hearts, but ends with a happy ending.

Nabi and Norang were a pair of stray cats. Logically, when they lived on the streets, they didn’t even have those names, it was just a couple of filthy fleas and little animals that lived abandoned on the streets of South Korea.

Nabi, with gray spots, looked after his beloved friend Norang like no other and it was enough to see his companion walking to know why.

Norang was in an accident, they don’t explain exactly how, but they believe he may have been injured by a vehicle. This injury prevented him from using his hind legs in a normal way and he was crawling almost everywhere.

His protection was absolute, especially since Norang was disabled.

Somehow, Nabi knew her friend was at a considerable disadvantage and you won’t be able to imagine what happened next …

This cat has practically become his best friend’s guardian angel! Nabi was always there, ready to protect the disabled cat at any cost.

Nabi and Norang are two inseparable cats with a more than touching story:

When they got food, many times thanks to the kind heart and courtesy of a woman who knew their situation and constantly tried to help them, Nabi made sure that Norang was eating well and that no one was there. there to threaten and annoy him.

Even on certain occasions, when other cats roamed the cardboard box where these two friends lived, Nabi would come out to meet intruders fiercely, ready to defend his territory and his inseparable feline companion at all costs.

But Nabi and Norang’s life was about to change for the better. The same woman who fed them contacted a rescue group, eager to help the cats.

It was not difficult to catch them, but you can be sure that for the two friends it was very painful days.

Her life would change forever

A medical evaluation showed them that Norang’s problem was hopeful, and the cat underwent a successful operation that allowed him to regain the mobility of his hind legs, as well as to walk normally.

Of course, the recovery was slow and he and Nabi both went through times of great stress, but they were in good hands …

Thanks to an operation, he regained mobility and healed his injury

And the best was yet to come! The same woman who promoted their rescue was looking forward to them at home… This pair of friends wouldn’t have to worry about anything else.

Now Nabi and Norang have everything they wanted in life: love, protection, and a home to go along with the loyalty they have always professed.

This story is so cute that it is such a waste not to share it to salute such a great rescue and animal loyalty.