Cat Guides Rescuers To Her Kittens – One Is Special 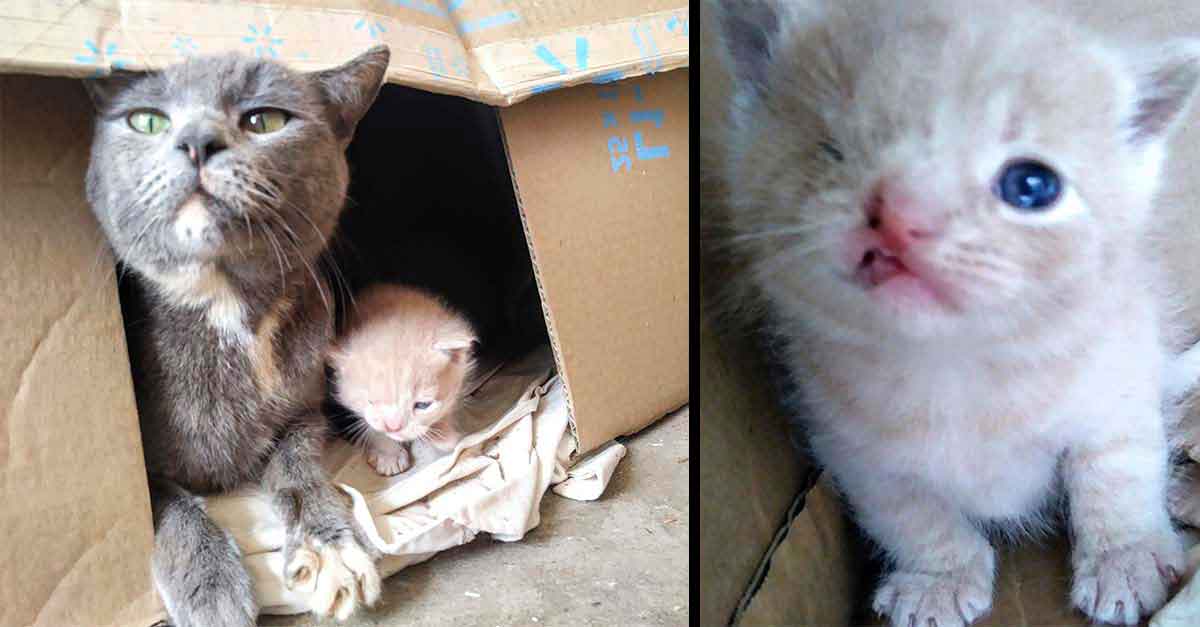 A couple rescued a family of kittens, and now they are receiving a lot of love. The youngest of all has a special condition on his lip and eye, but he has undoubtedly shown to have the most charming personality of all.

Kris and Kia Papiernik have spent years caring for homeless kittens in Philadelphia, Pennsylvania, through the rescue organization Kolony Kats. They rescued a kitten with adorable babies and one of them has a special condition that immediately conquered their hearts.

Kris told Love Meow that they were driving their daily route and noticed the cat as she crossed the street. The couple who have always been characterized by offering help did not hesitate to get out of their car to offer her some food.

That particular day was cold, there was no one outside, and when they got closer they could see that the cat was lactating.

She was friendly enough, but a little nervous. The couple decided to wait in their car and see what path she will take in order to get to their kittens.

The cat headed for the porch of a house, and there inside an old box they found the four babies, who belong to her fourth litter for the past two years.

The owner of the house claimed that it was a homeless cat, and the couple decided to rescue the whole family so that they did not end up straying in the street.

She agreed. We returned the next day and picked up this little family. It was then that we noticed that we had a special kitten.

All the kittens and the mother were taken to the vet. Fortunately, the tests were favorable, the youngest was diagnosed with cleft lip and anophthalmia, a genetic disorder that causes the absence of the globe and eye tissue, but both conditions will not affect her quality of life.

The kittens were placed in a foster home, thanks to a volunteer named Roe. The cats’ mother was named Eleanor and she is undoubtedly calmer now because her babies are safe.

The small kitten with a cleft lip has been named Kurduroy. He is a few ounces lighter than his brothers, Koko, Kelsi and Kirby, but his special condition has not been an impediment to demonstrate having the most charming personality.

Although physically different from others, his mother and brothers adore him. His mother is very attentive and protective, Kurduroy is aware of each of his steps to make sure they are well.

Kris is happy to be able to help the kittens on time, because within two weeks or so they could have left the place where they were to face an uncertain future on the streets.

The mother and her babies will never again have to endure cold temperatures, fight for food, or risk being hurt by heartless people.

In a few weeks they will be ready to start a new life in permanent homes.

Mom is absolutely loving. She lets me touch her babies and hugs me as I hold her. The kittens now weigh more than a pound and are amazing. Eleanor makes sure they are well fed and well cared for.

If you want to know more about the wonderful work of the rescue organization Kolony Kats, do not hesitate to follow them on their official Facebook and Instagram pages.