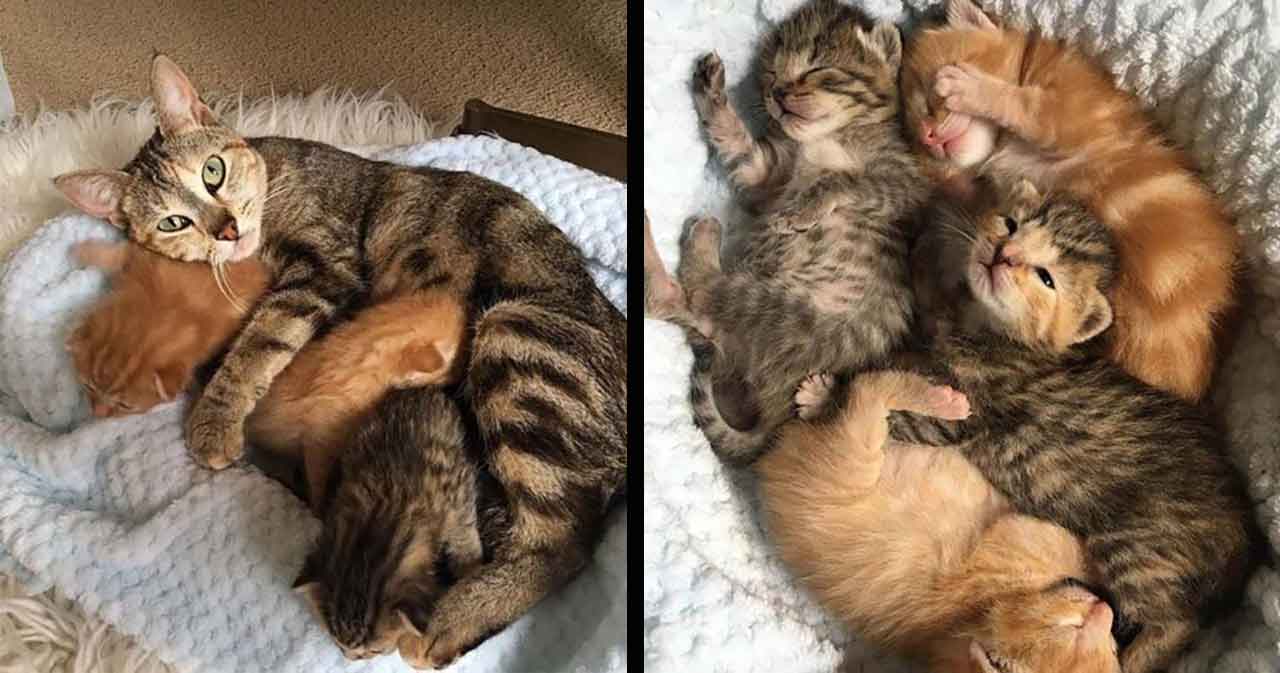 Four kittens were taken to a shelter without their mother. But the cat looked for them again.

Alissa Smith, co-founder of Wrenn Rescues, was contacted about four 10-day-old kittens who needed to be saved. Staff at a shelter in Downey, California tried desperately to find help for these animals or they would have died.

“There were only 15 minutes left, and no one else could take them, but luckily a group pulled them out safely, and a wonderful woman named CJ transported them to Ventura County, California, to ours.”

The kittens were found in someone’s yard with their mother, but she quickly escaped and fled.

Ashley, a local rescue worker, immediately started bottle-feeding them overnight. Jenifer Hurt, co-founder of the rescue center, fed them during the day.

“The kittens were visibly well taken care of by their mother cat. When orphaned kittens arrive at the shelter, they usually do not see their mother again. Another important reason to leave the kittens where they are (and wait for the mother), instead of taking them to the shelter. ”

Ashley and Jenifer were completely prepared to take care of the kittens until they were weaned, but something incredible happened.

Residents who rescued the kittens returned home and were surprised to find the mother outside looking for her babies. So they caught her and the next day, the cat was taken to the foster home to meet her kittens.

At first, Spidey, as the cat was called, was very shy after the difficult ordeal to believe that she had lost her cubs until Ashley took one of her babies near her.

Then the mother went out immediately to meet her kittens.

The sweet mother was very happy, purring and kneading with her paws while feeding her hungry little kittens.

“I don’t think we’ve seen anything so comforting. It is incredible that this miracle happened. “

When Ashley woke up the next morning, Spidey snuggled against her and purred.

As foster mothers of newborn kittens, Ashley says they do their best to make the kids happy and comfortable. But she’s sure that nothing they do compares to the happy feeling of having a mother lying next to them.

“She is a patient mother and her gratitude for coming back with her kittens is palpable. They are the happiest and luckiest babies. “