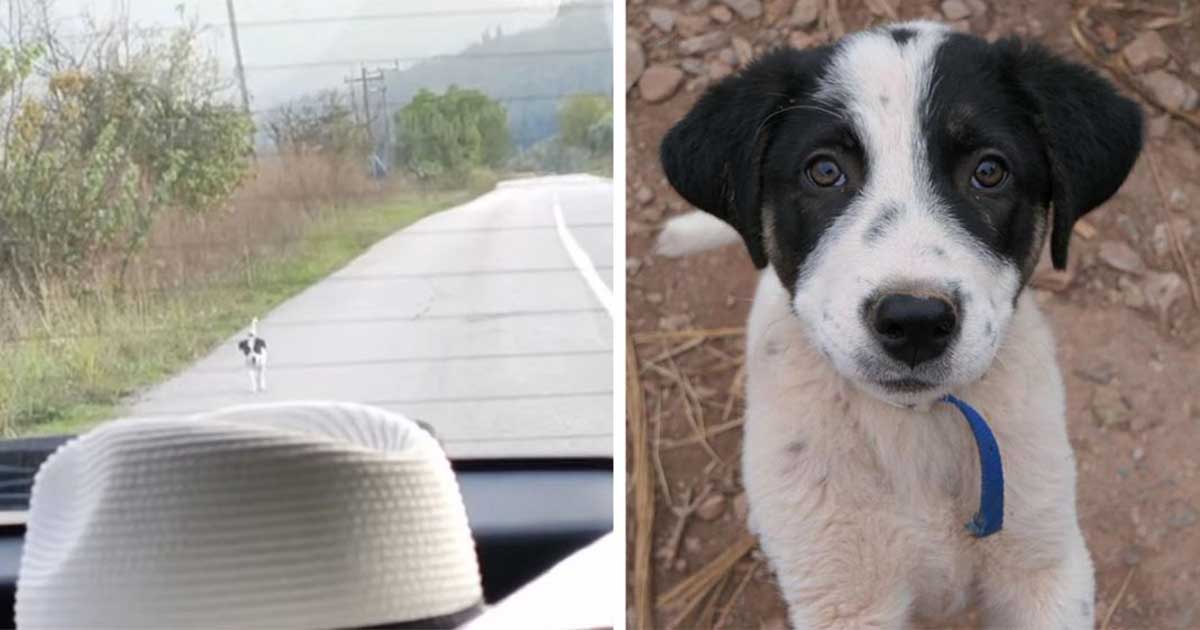 Stray little dog was chasing car in hopes of being rescued, now he has a second chance

While driving on a country road in Greece, Valia Orfanidou was able to observe from her car a small stray black and white puppy who jumped from the bushes and started to run deliberately behind her car. She knew she couldn’t leave the stray puppy on her own.

The woman looked at him in surprise in the rearview mirror as he slowed down his vehicle. Valia is an animal rescuer in Greece and has her own blog called The Orphan Pet, where she details the experience of every process and rescue she performs.

My thoughts were, ‘Oh no, another one. Greece has between 3 and 5 million stray dogs. The streets here are like an open-admission refuge: anyone who no longer loves their dog throws them out onto the streets, there is no other option.

Stray puppy runs behind a car

The woman stopped her car and tried to get closer to the little dog to convince him to get on. It went on for just over 10 minutes looking for a way to come together and gain their trust.

When I stopped, he hid under the wheels of the car. Every time I approached he would hide, and when I took a few steps back he would come out of his hiding place and bark at me like he was trying to say something.

When the woman was finally able to hold the little dog, she immediately put him in the car and the puppy looked very happy and wagged its tail happily. Valia immediately went to a veterinarian where, luckily, they saw that the little one was in perfect health; despite his life on the street.

The little boy now named Bandit is with a loving foster family in Athens; he is very alert and playful, he is a very happy child and grows up quite quickly.

He is independent and determined. [But] very loyal and lives to learn.

Bandit is now exploring a lot of new things for him, he enjoys warm plush beds, healthy and delicious meals, the unconditional love of his caregivers and pleasant walks where he can run until exhaustion.

In no time, with the support of the Bandit of the Second Chance Animal Rescue Society, he will find a family filled with the love and care he so longed for and deserved.

If you would like to learn more about the work of the Second Chance Animal Rescue Society and would like to donate to help stray dogs in Greece, you can do so by visiting their website.