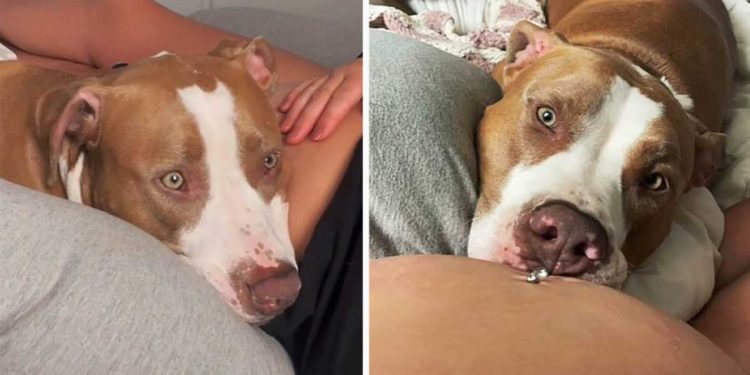 Goose is an adorable rescue dog who loves his family unconditionally. He is so grateful for the love he has received since he met his new parents, that he always tries to make sure they are safe, and he became a very protective boy ever since he learned of his mother. he was pregnant.

The woman says that she always believed that Goose knew something new was happening around her, but she was not sure that her dog knew exactly what it was, until the day she saw the belly of the her mother move.

Goose’s mother Megan mentioned a video on her TikTok account:

Since I got pregnant, he has been a little more attached to me. He is constantly lying with me, lying on my belly [and] touching my belly with his nose.

Dog is surprised when he feels a baby kick

Just a few days before his due date, Goose was resting his head on his mother’s womb when he suddenly felt his future sister kick from the inside.

When the dog realized what was happening, his face said it all; surprised he had a thousand emotions reflected in his eyes.

A post shared by Dog Videos And Dog Pictures (@dreamingofdogss)

Thousands of feelings took hold of Goose at that moment, and everything was luckily recorded in a sweet and short video. His reaction is without a doubt one of the sweetest things that can exist.

Goose and Luna, the other dog in the family, were very eager to meet Ivy, their new newborn sister, and of course their parents know that they will both be the best older siblings of all time and they are eager to see how their love and his relationship with little Ivy develops in the future.