Abandoned Dog Has The Best Reaction To Finding A Loving Family 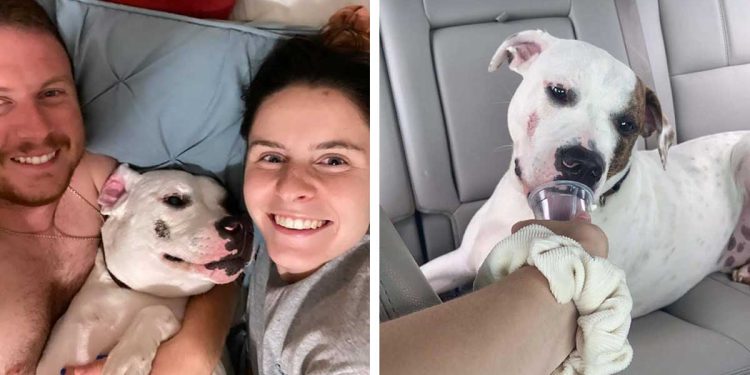 A sweet dog who had been abandoned at a dog park gets the help he needs and is eventually adopted by his rescuers.

Anthony Noto and his girlfriend, Mikayla Sengle, had no intention of having a pet in their home, but when they met a sweet, abandoned dog who suddenly came into their lives, their thinking quickly changed, and it was as if fate was telling them that was what they had to do.

About a month ago, Anthony was driving home after a long day at work when he decided to stop by a local dog park. In a corner of the park, the man noticed that there was a white and brown puppy, which was alone, apparently disoriented, confused and sad.

The man approached the animal and noticed it had a collar, but it was a bit beaten up, so he assumed it was lost.

He seemed lost, but at the same time he seemed on a mission to find something. When I walked to my work truck, he came all innocently with his head down to see if I would accept him.

So, Anthony made a makeshift leash out of rope and tied it around the pup’s neck and they started walking everywhere. The original idea was to be able to find his owners, but as no one recognized him, he got him into his car and took him home.

The little dog named Wylie didn’t want to bother his new friends and wanted to show them that he was very polite and had the best manners.

With people, he was waiting for them to give the go-ahead to lick and pay attention to people. He seemed extremely relieved and happy. He took a bath and treats as soon as he got home.

Whenever he was about to make a move, Wylie would first look at Anthony for his approval, and if he gave permission, he would.

The puppy quickly gained confidence and started running around the patio of the house, he was very excited, it seemed that he had never had the opportunity to be free. The first night at the couple’s house, Wylie slept with his rescuers, wanting to make sure his friends wouldn’t abandon him.

Wylie felt very comfortable and happy, but Mikayla decided to share her photo on social media to try and find her family. But they received a response from a netizen who broke their hearts, after learning his true story.

A girl came up to us and basically said it was her friend’s dog and her friend saw the message and said she didn’t want it anymore because it was boring.

He even recommended that if the owners showed up, they shouldn’t give him back, because at home they beat him up and they weren’t very nice to him. The couple decided to keep the dog for a few days to see if its owners showed up, but they said nothing and never claimed it.

Once the week was over, Mikayla and Anthony had no doubt that sweet Wylie would stay with them for the rest of her life.

He is a very sweet dog and a great companion. He and my boyfriend bonded almost instantly…we knew in our hearts that he was our dog.

The couple had always thought their family was complete, but now they can’t believe fate has rewarded them with Wylie.

For his part, Wylie is happy to have found the loving family he always deserved to have in the first place.