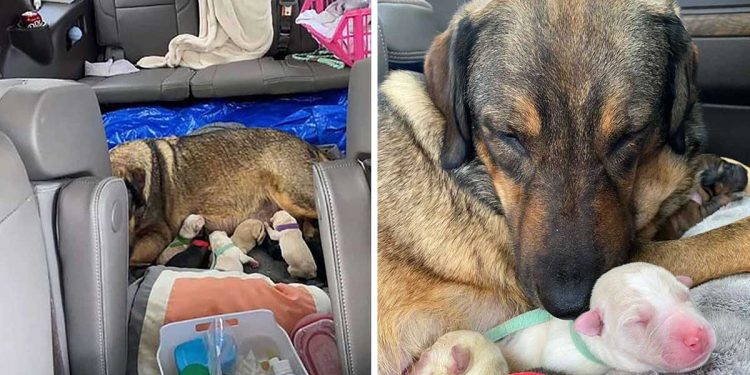 This sweet Texas family spends 12 hours inside their car helping their rescued dog deliver her puppies in the heat.

Magnolia (Maggi) is an adorable dog rescued from the streets of Fredericksburg, Texas (USA), who was found alone and pregnant. She was transferred to the Hill Country SPCA by Animal Control, but just as she was about to give birth, they found her an amazing foster home.

When Maggie arrived with her foster family, they realized she was an incredibly sweet girl. They discovered that her maternal instincts were reflected in her relationship with the young girls in the family.

Maggie’s foster mum prepared for the babies to arrive, she was a bit nervous as she had never helped a pregnant dog before, but did a lot of research to make sure she was ready for it. help Maggie with her puppies.

I had read so many resources, watched so many YouTube birthing videos, and gathered hundreds of dollars’ worth of birthing and emergency supplies to keep on hand. One thing I had read about was the importance for puppies to stay warm after they’re born. If they’re not warm, they can’t digest food and they’ll start to fade.

The time of the delivery was approaching and the family, although ready to help Maggie, were also somewhat distressed. The arrival of the cubs happened at the same time as the big winter storm that recently hit Texas. At that time, Maggie hinted that the puppies would be arriving soon.

Aubrey hoped that when the puppies arrived the power would be back on, but when the first pup arrived there was still no power and their home was affected by the freezing weather.

Aubrey and her family grew concerned and did their best to give Maggie some warmth.

Our house was 5 degrees and falling (it was 1 degree outside that night). We moved it to our guest bathroom where we took the scorching shower to try and warm the room up and my husband was boiling water to put in bags to try to keep the room warm.

As the little puppies were born, the cold didn’t stop, and despite the best efforts of this Texas family, they had to do more to keep Maggie’s new little family safe. When they took her in, they promised to help her with everything with her babies and they were not at all willing to let her down.

After the birth of the fourth puppy, we realized that despite our best efforts, the puppies were still too cold. That’s when my husband started getting the car ready for Maggie and the puppies. Maggie had her last three puppies in the car. We first put them in the car around 2 a.m. and were there for about 12 hours.

The couple also tried to find a generator to heat part of their house again. They finally found one and returned home. But after a while, the house was still too cold even for the couple’s children, so they decided to leave until the power came back.

The whole family went to Aubrey’s parents, as they had energy and a warm space to house the family; her daughters, three dogs, the new mother and her seven puppies stayed there for a few days.

When power was restored after the storm, the family returned home, including Maggie and her puppies named: Daisy, Poppy, Ash, Rosie, Dahlia, Clover and Aster. Despite this difficult start, the puppies are doing perfectly, growing and developing strong and healthy.

Maggie is so sweet. She is extremely affectionate, not only with her puppies, but also with my daughter who is 2 years and 9 months old… It has been incredible to see her become a mother. She’s totally natural with her puppies.

The adorable Maggie and her puppies will be up for adoption through the Hill Country SPCA in April. For now, her foster family will continue to care for the troop, and they are very happy to have Maggie in their care and can’t wait to see how she and her puppies will soon begin a happy new phase of their life. life.

She really is an amazing dog…We will miss having her with us when she finds a forever home.

If you want to know a little more about Maggie and her puppies, and her adoption process, you can visit the Hill Country SPCA website.