This Cat And Dog Love To Travel Together, And Their Photos Are Epic 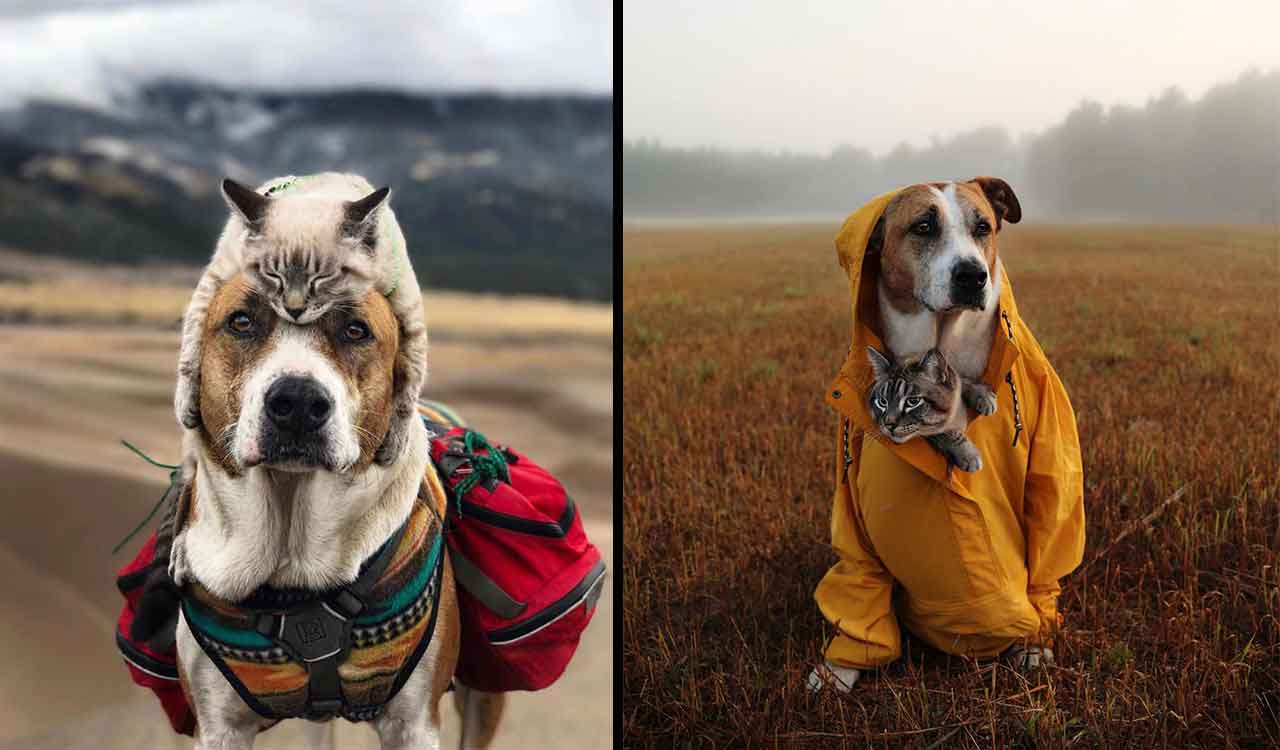 Best friends Henry and Baloo have a lot in common: both were saved from the streets and are now enjoying long walks in the wild. This dog and cat are a traveling duo.

Their unusual friendship and their excursions around the magnificent mountainous landscapes of the state of Colorado, in the western United States, have gained thousands of followers on social networks. Hundreds of thousands of people follow their adventures on Instagram. For pet owners, Cynthia Bennett and Andre Sibilsky, their popularity is surprising.

Cynthia and Andre met in Boston, but they say that as natives of New Hampshire and Texas, in the east and south of the United States, they are in love with nature. Both say they were meant to get away from city life. “We wanted to go west, where there were bigger mountains. We thought of Colorado and there we are, there was not a lot of planning,” Cynthia told the BBC. Once settled, the couple decided to enlarge the family. They adopted Henry, a large lanky dog, a husky crossbreed, boxer, German shepherd, Australian shepherd and a Staffordshire terrier.

The popularity of the animals allowed the couple to follow their love of excursions. “He was the same age as all the other puppies, but twice as big. As soon as I entered the shelter to see him, he approached me and turned around,” said Cynthia, laughing. “André knew we would take it. I think he chose us somehow,” he adds.

Born on the street, Henry was adopted into a rescue center that relocates animals from other states where shelters have high abandonment and death rates. Henry, descending from high energy dog ​​breeds, immediately adapted to the long walks of his owners. A year later, Cynthia realized that she was posting too many photos of Henry on her social media, so she decided it would be fun to create her own account.

It took three years to reach 30,000 followers on Instagram. This number became uncontrollable when they adopted Baloo, the cat. “Henry was very anxious when we were not at home. He was so stressed that he didn’t eat or drink, so we thought he needed a friend,” says Cynthia. “Thanks to Instagram, I saw other people walking around with cats who really liked being in the wild,” he adds. The couple spent months looking for the right partner for Henry until they found Baloo.

Like Henry, Baloo is a rescued animal. It was part of a litter of eight kittens from a mother whose owner had refused to neuter her. Baloo and his brothers were immediately abandoned. Baloo definitely had an obsession with the dog: if I want him to calm down, I put him next to him and he falls asleep, “explains Cynthia.

“I think Baloo thinks Henry is his mother,” she says. “During the first months, I tried to breastfeed her,” says the owner. Cynthia suspects that the cat also has the feeling that it is a dog. “If he sees a dog walking, he runs towards him. But if he sees a cat, he ignores it. Doesn’t he realize what it is? It’s very funny,” said he.

Cynthia’s family, he says, is surprised by the popularity of the videos and photos of the two animals. “My grandfather, who is my best friend and who loves nature, thinks he’s amazing,” he says. While André works in an office in the financial world, the popularity of animals on Instagram has led Cynthia to decrease her work in event marketing and to focus more on updating the account and her passion for photography.

“Taking a leap as an artist is scary and not very stable in the long run, but I always tell my followers that they change my life and that they allow me to do what I love,” says Cynthia. The success on Instagram “also gives Henry and Baloo a better life, I have more free time to travel and be with them,” he says.

However, not everything is positive. According to Cynthia, he has received attacks on his animals’ account for his “alternative” lifestyle. “I wonder ‘why are they attacking a dog and a cat?’. I just don’t understand,” he laments.

But according to her, support far exceeds negativity. Through Instagram, she and Andre have connected with other people in the so-called “van life” community, who receive similar complaints and criticisms for their nomadic lives. . “Just ignore them,” he says. “There are hundreds of other comments from people who say that Henry and Baloo brighten up their day.”