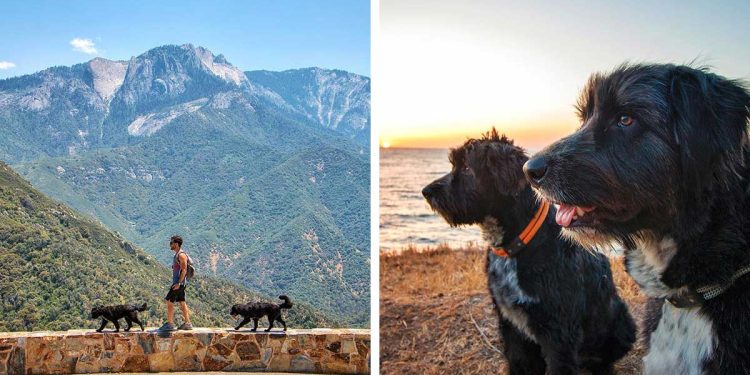 Two adorable puppies have been abandoned in the middle of the desert. Sad, they wandered in the intense sun, without food or water; his days were numbered. But they did not know that their destiny would change.

Jordan Kahana, a 30-year-old man, was traveling in his car from Los Angeles to Colorado, USA, when he spotted them on the side of the road. Without thinking, he stopped the car and led them in.

He made sure they were okay

The first thing he did was give them water and then he took them to the vet for a thorough checkup. The doctor told him that they were a little malnourished and dehydrated, but that they would be fine soon.

Jordan was about to begin the best adventure of his life, and now he had company. He decided to name them Sedona and Zeus, and through a DNA test he learned that they were a mix between a German Shepherd and a Border Collie.

Once recovered, the three set off again on the road that would take them through the entire territory of the United States and much of Canada. Together they visited 35 states and both coasts.

They are the envy of the animal kingdom

Additionally, they visited 12 national parks and some of the most touristic places like Times Square in New York, and even posed in front of the Hollywood sign in Los Angeles.

I was driving to Colorado to spend New Year’s with my friends and when I got out, I called Page and asked if I could bring two more friends. He said to me: ‘no problem’. When I arrived with the dogs, he was very surprised. Everyone wanted to hear the story, they fell in love with it.

They are very famous

After that Christmas trip I planned to quit my job in March or April because I wanted to travel more and I did.

Saving Sedona and Zeus definitely changed his life forever. You know it was the best decision you ever made. Your adventure wouldn’t have been the same without them.

He admits that everything was not as perfect as it looks in the photos, because at first it was difficult for him to train them. But now he knows they will be together for the rest of their lives, and all three are very happy.