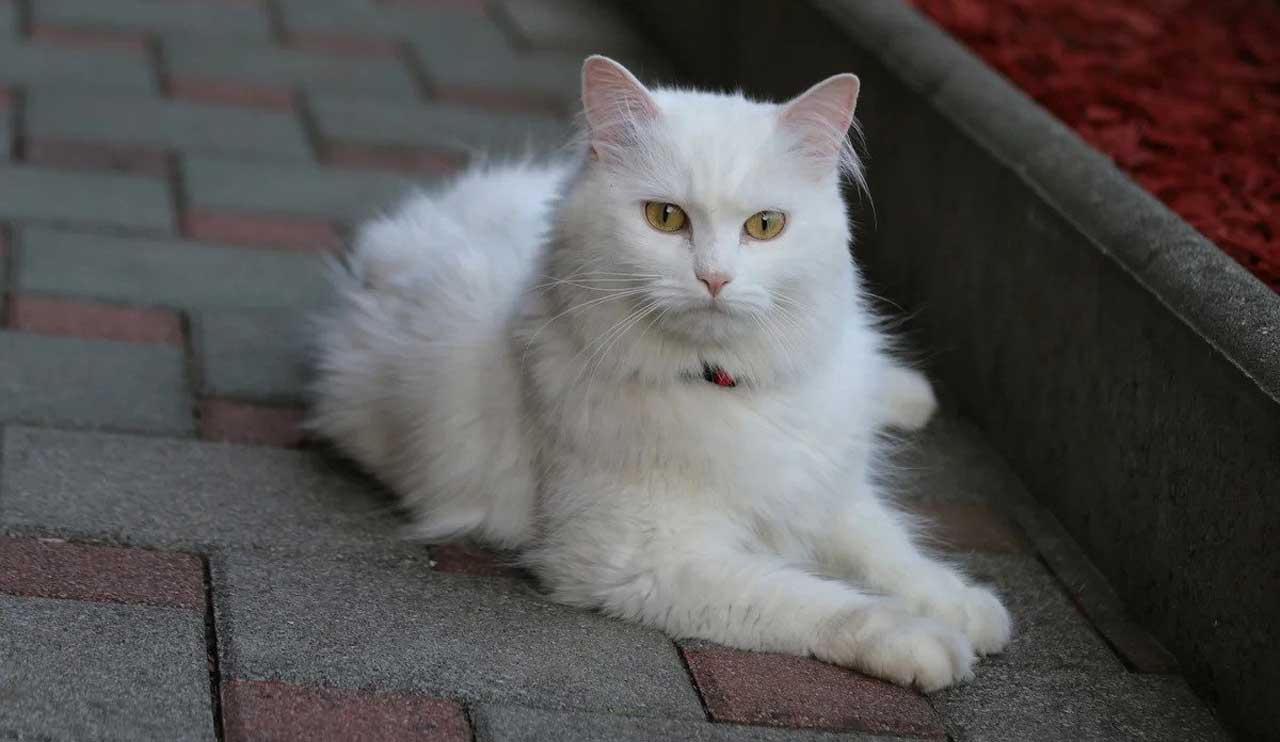 One of the most majestic, delicate and elegant breeds in the feline world is undoubtedly the Turkish Angora cat. This breed is considered one of the oldest existing domestic cats, and they are also considered to be the first long-haired in history.

In this breed sheet of Pets Feed, we will share with you everything you need to know about the Turkish Angora cat, its origins, its characteristics and temperament, without forgetting the details of the basic care is this breed needs.

Characteristics of the Turkish angora

The Turkish angora cat can be described as an animal with elegant and sophisticated movements, characterized by great beauty and delicacy in a physique which does not always correspond to its active and playful temperament. Without a doubt, the most striking of all its characteristics is this silky coat which sometimes recalls the feathers of birds. But it’s not the only thing that makes this feline unique, so you need to know the rest of the features of the Turkish angora.

The size of the Turkish Angora cat is medium compared to other similar cats, although it can sometimes appear larger due to its fur. Its average weight is around 4 kilos, a normal weight for most domestic cats. His body is long and athletic, very thin.

This cat keeps the proportions perfectly throughout its body, although its head is rather small compared to the rest of its anatomy. It is striking that its hind legs are higher than the front, but this poses no problem for the animal. It is distinguished by a long and highly populated tail with a long, soft coat, and large almond-shaped eyes for the size of its head.

Another striking rarity of this breed is that it usually has heterochromia in its eyes, or, which is the same, eyes that differ in color from each other. Most often, you have a yellow or amber eye and a blue or green eye, but the combinations may vary.

As for the color of its fur, in its origin, only the white Turkish Angora cat was completely accepted, but over time, other colors appeared, so now you can see specimens of shades such as red, blue, cream, brown etc. Although it is not common to find a Turkish black angora cat.

Behavior of the Turkish Angora

The character of the Turkish Angora is playful without being hyperactive. He knows how to be calm and quiet when the situation requires it and to activate himself during the moments of play. He likes to do all kinds of activities which develop his physique and his spirit, but he also likes the rest and the moments of tranquility like most.

He is a fairly sociable cat and enjoys spending time with his human family, even adopting canine behaviors such as following his owner throughout the house. However, you may not be sure you are dealing with children or strangers if you are not used and socialized since you are a baby Turkish Angora cat.

It should also be noted that these are docile animals, which learn quickly with their intelligence. In addition, they like prizes in the form of mimes or candies, making it a cat that can easily learn various tricks.

They also easily adapt to life anywhere as long as your family gives you the attention you need, especially when it comes to care and activity sessions. This cat will therefore be happy both in an apartment and in a large house with a garden.

The Turkish angora cat may suffer from an inherited ataxia of an autosomal recessive nature. These cats, who seem to waver, suffer from a neurological disease that causes coordination problems. Many affected kittens perish very young. With a lot of care, specialized help, good adaptation at home and specific veterinary care, cats with ataxia can live for many years. The origin of this disease is not known, but what is indisputable is that it is a congenital pathology; adult animals cannot spread.

For genetic reasons, hearing loss and deafness frequently occur in white cats. There is also evidence of balance disturbances. These problems are not related to the specific breed; many Turkish angora cats are completely white and suffer from these diseases with some frequency.

Among the treatments the Turkish Angora cat needs, the need to brush the fur several times a week to remove dead hair stands out. In this way, in addition to keeping its cape in the best possible conditions, this will prevent the cat from swallowing too much crushed hair during grooming, which will become balls of hair in its digestive system which can lead to various problems.

With these frequent brushings, the coat will be kept in good condition, but it is not necessary to forget the full baths once every 6 or 8 weeks with a shampoo which improves the tone of their hair and which is a specific product. for cats.

Another thing that must be taken into account in the care of the Turkish angora is the diet, which must be balanced and always in sufficient quantity for its level of activity and its size. Like most cats, it will tend to gain weight if it is offered too much food and of poor quality, so it is advisable to be aware of this point to protect their health and ensure that they are always in the best conditions.

Finally, we must not forget exercise and education as part of the care that the Turkish Angora cat needs. Exercise is essential for your physical health, just as education is essential for your mental health. In this way, you will have a balanced and healthy cat when he is an adult, to enjoy with him an incomparable relationship for many years.

This breed has no particular nutritional preferences. The most important criteria are a balanced diet and sufficient vitamin intake. Turkish Angora Kittens should be fed 4-5 times a day, teaching them to fermented milk products. Otherwise, you will have to buy calcium supplements that ensure normal tooth enamel mineralization and nail growth. Adult animals need to be fed 2 times a day at a strictly defined time. Increase the intake of fat-soluble vitamins during shedding to help reduce hair loss. The natural diet should include:

It is not recommended to feed Turkish Angora cats with hearts, liver, seaweed – all this contributes to the yellowing of the fur. This restriction does not apply to other colors. Completely protect your pet from the consumption of fried, peppery, too salty foods, sweets. When choosing ready-made food, give preference to the highest quality products for long-haired cats.

Important! Quite often you can find kittens on sale “under the Turkish Angora”, which are actually a mysterious cross with Persian genes. Therefore, it is better to contact sellers with a good reputation and those who are ready to provide documentary evidence of the purity of the breed.

As its name suggests, the beautiful Turkish Angora comes from Turkey, where it has always been highly prized. There are records of these cats dating back to the 16th century. It was this breed of cats that contributed to the development of the Persian cat.

At the beginning of the 20th century, the Angora cat nearly died out, but since the breed was considered a national treasure in Turkey, a Turkish Angora breeding program was developed at Ankara Zoo.

During the 1950s, American servicemen spotted these beautiful cats during a visit to the Ankara Zoo, but it was not until the early 1960s that the zoo allowed the wife of an American colonel , Liesa Grant, to acquire a pair of cats which were then brought to the United States.

The Cat Fanciers Association did not register the breed until 1968 and accepted it into the Cat Championship in 1972. In 1979, the Angora breed was awarded champion status by the International Cat Association.