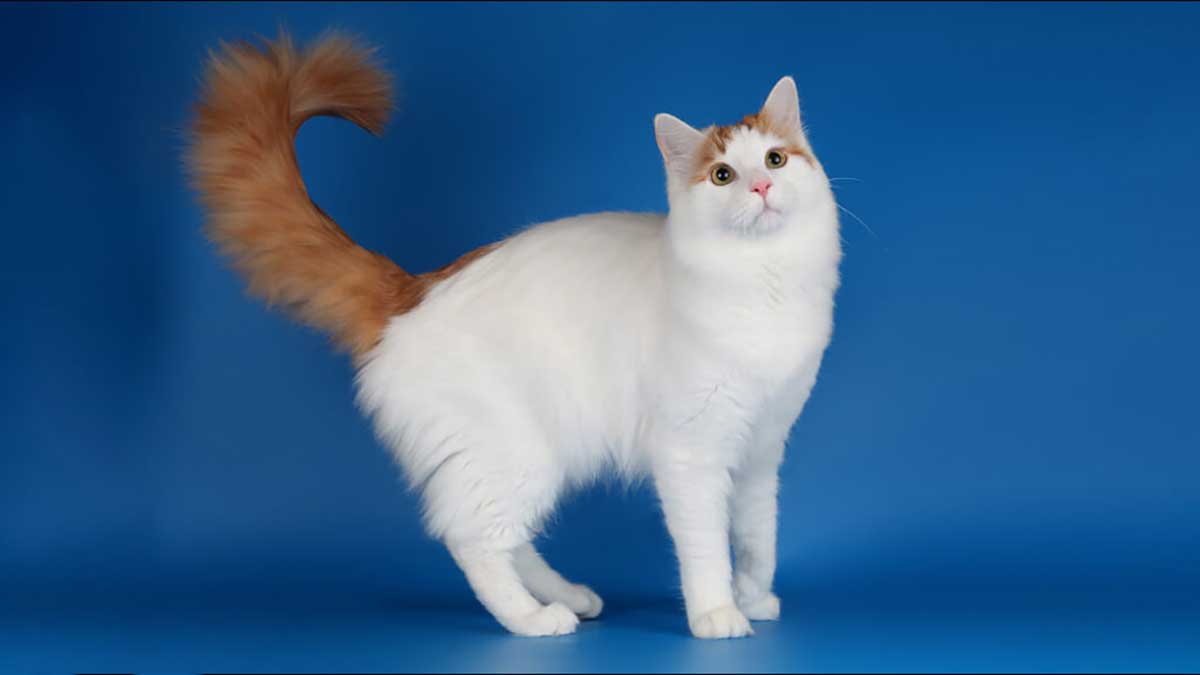 With a fluffy and cottony coat, a captivating look and a sociable character, the Turkish Van cat breed has many characteristics that make it unique and particularly desired.

The belief that all cats are afraid of water is wrong. A great example of this is the Turkish van, known for his good-natured disposition, intelligence and attractive appearance. Vans are usually white in color, with a red tail and spots on the head. Turks consider such marks as “the touch of Allah’s fingers”, which emphasizes their love for these interesting animals.

The Turkish Van is a large and muscular cat, although elegant, with a white body and a distinctive color on the head and tail. This cat has a balanced and strong appearance. With his big ears and his eyes are large, oval and expressive.

Friendly and sociable, The Turkish van perfectly tolerates socialization and feels great in a city apartment.

Like Angora and Somali cats, they are ready for intimate dialogues with the owner, but without disturbing their personal space.

If you have adopted or bought a Turkish Van cat or plan to do so, in this ‘ Pets Feed ‘ breed sheet, we will share with you everything you need to know about these magnificent cats, explaining in detail their origin, their character, physical characteristics or health. If you are passionate about Turkish Van, do not hesitate, read on and find out all about this really special feline!

Characteristics of the Turkish Van cat

The Turkish Van breed is considered medium to large, because its weight varies from 7 kilos which are generally weighed by males and from 5 or 6 kilos by females. This cat is robust and muscular. Its body is solid and slightly elongated, there are specimens which have reached up to a meter long if they are measured from the nose to the tip of the tail.

Its hind limbs are a little longer than the forelimbs. The head of the Turkish Van is triangular with a slight downward inclination. The eyes of this cat are oval and large, very expressive and normally have shades ranging from amber to blue, although there are many cases of heterochromia.

Probably the most characteristic thing about the Turkish Van cat is its fur, as it has a thick coat, medium long and silky hair. It has only one layer of hair, without showing a woolly layer. Although it has fairly long hairs, these hairs are not easily tangled. Its basic color is always white and the marks that make up the van, that is to say the typical motif of the breed, are generally reddish, although other colors such as chestnut, blue, cream or turtle are also accepted.

This funny cat is very famous for his passion for water, which he appreciates without regard, whether in a bathtub, in lakes or rivers near his home. He is also a very playful and sociable cat, as long as he has spent time socializing as a kitten, so he will have a good time if we spend time with him, prepare games or give him toys that keep him active and entertaining.

It is a cat that can adapt very well to children, because it very much enjoys the company of the little ones in the house. We can create common games that will delight both the animal and the children. We can encourage our Turkish Van cat through stalking or hunting games, so toys such as moving mice, fishing rods or others that come to mind will be ideal to enjoy watching our kitten. play without pause.

We must be aware that, like many other cats, the Turkish Van breed likes to climb on the heights, without taking into account that to reach the top of this shelf, this cat will have to hang on the curtains or move objects of our furniture. We must be patient and, in no case, reprimand him for this attitude, but reinforce positive behaviors. In addition, it is important to stimulate it with toys or scrapers of different heights, so that it can climb and jump without fear of breaking or damaging the furniture, or of course itself.

As for relationships with people, the Turkish Van is really sociable and affectionate, appreciating the well-being and the company of the whole family, as well as that of other animals.

Turkish Van tends to be healthy, however, as with many other cat breeds, inbreeding has been a recurrent method among breeders, which has favored a greater predisposition to the development of congenital diseases typical of the breed. One of them is hypertrophic cardiomyopathy, which consists of an alteration of the heart muscle or myocardium, because the left ventricle is larger and thicker than what is practical.

The breed also tends to have hearing ailments, as the predisposition to deafness of white cats has affected the breed, which is why it is common to find specimens with total or partial deafness.

To maintain an optimal state of health, we must pay particular attention to the vaccination schedule and periodic deworming, as well as not neglecting regular veterinary checks, every 6 or 12 months, to guarantee a positive state of health and ensure the rapid detection of any pathology. The life expectancy of the Turkish Van cat is around 13 and 17 years.

Each cat is unique and has its own needs in terms of food. However, cats are carnivores and each cat must obtain 41 different specific nutrients in their food.

The proportion of these nutrients will vary depending on age, lifestyle and overall health, so it is expected that an energetic kitten that is still growing needs a balance of nutrients different from that of a less active older cat.

It is necessary to pay attention to the amount of food necessary to maintain an ideal physical condition according to the feeding guidelines and according to individual preferences regarding the type of food (wet or dry).

Looking at the photo of the Turkish Van, it is easy to notice that the animal’s coat does not have a thick undercoat, therefore it is not subject to felting.

However, brushing your pet is necessary. This procedure is especially important during molting.

If at usual time it is enough to walk with a brush once a week, then during the pet’s molting period it is necessary to comb out with a furminator 3-4 times a week, helping him to get rid of dead hairs.

Often you should not wash your pet, because its snow-white wool self-cleaning without difficulty, but it is necessary to give it the opportunity to swim.

The Turkish van dries quickly, because its wool has another amazing property: it repels water.

To prevent your pet from scratching you or your child too much, regularly trim his nails and buy him a scratching post.

Whichever side of the life of the Turkish Van we touch upon, cats never cease to amaze us. They are easily accustomed to harness and enjoy walking on the street, like the Egyptian Mau and Maine Coon cats.

With even greater joy they welcome walks by the reservoirs.

Their natural love for water causes a storm of positive emotions in them, they splash in shallow water, swim along the coast and show miracles of dexterity in hunting for small fish.

If you want to enjoy an unusual sight, be sure to take your pet to the river or lake.

The whiteness of the coat is a reward for a correct and balanced diet. In this regard, you should not offer your Turkish Van cat the liver, heart, as well as everything that contains seaweed. This will help to avoid unwanted problems in the form of yellowness on the fur coat.

The main rule is that the Turkish Van cat should receive meat in the diet, sufficient for its normal life. This means that the daily level of it is from 60%, in feed with 80% digestibility. Cheap and poor-quality foods, which have about 5% meat content, are not suitable for the cat, can cause liver stones.

Meat, like fish, is pre-frozen or boiled. Eggs are boiled and chopped. They also do the same with cereals and vegetables, which are then mixed with meat products. Fermented milk products are also useful for the Turkish Van cat.

Strongly not suitable for cats is spicy, salty, canned, smoked. Try to limit your intake of fatty and fried foods. And also, food cannot contain cartilage and bones. This also applies to river fish, which in connection with this circumstance is better to replace with sea fish.

Regularly you need to change your Turkish Van cat’s water. It is optimal to do this once a day. And also, it is worth including in his diet vitamin and mineral supplements in the amount strictly recommended by the instructions.

This is one of the aboriginal breeds, that is, formed in a certain area under the influence of natural factors, to the creation of which a person did not exert his efforts. Its historical homeland is Eastern Anatolia, which is part of Turkey. These animals got their name due to the fact that they were distributed mainly in the vicinity of Lake Van, located in the Armenian Highlands.

In Turkey, Turkish Van has been known since the Middle Ages, but the world learned about the Van cat much later – in 1955, when two residents of Great Britain – Laura Lushington and Sonya Halliday – visited Turkey in order to get better acquainted with the sights of the country and its national color, as well as to make a reportage. And so, during one of their trips through the territory of Asia Minor, they were a lot surprised when they saw large cats, splashing without fear in a small stream.

This unusual behavior aroused great interest among the travelers; and, having found the owners of unusual animals – local peasants – they began to beg them to sell them pets. But the inhabitants of eastern countries are famous for their generosity in gifts to guests, and Laura received two cute kittens of the Turkish Van as a gift, taking them with her to England.

Unfortunately, the first couple did not bear offspring, but, a few years later, Lushington again visited Turkey in 1959 and again brought a couple of Turkish Vans. This time, luck was on their side, and soon kittens appeared that retained all the signs of the breed – a snow-white color with brick-red spots on the head and the same tail, delicate fur and a strange love of bathing for cats.

Officially, these immigrants from Turkey were recognized in Great Britain in 1969, giving them the name “Turkish cat”. The International Cat Organization registered it in 1971. In 1979, the name was changed to the modern “Turkish Van” to avoid confusion with the Turkish Angora breed.