The story shared by a reddit user left us with a puckered heart and with a singular kitten's great lesson and show of love. 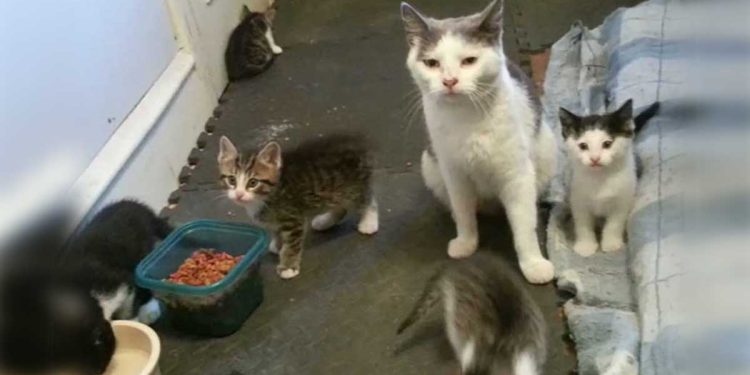 The feline was found wandering around a young man and his brother. The boys decided to feed her and, although at first, she was a little scared and somewhat aggressive, the animal gained confidence over the days.

“When it happened, it was very wild. He wouldn’t go near anyone,” reddit user Ogreaper said.

They nurtured her all winter and her relationship improved so much that one afternoon she surprised them with an unexpected visit.

She came to eat as usual, but she did not arrive alone, but with 5 other friends.

Apparently, the cat had given birth and was willing to introduce her children to the generous brothers who had nurtured her for months. Of course, at first, she was quite protective of her kittens.

“When we got really close to the kittens, she would hiss and half try to claw multiple times,” the user commented.

Despite the rudeness, the boys knew they couldn’t leave the family there and decided to insist on taking them somewhere safer for them.

The little animal’s reaction was a common and natural reaction to his protective instinct.

The brothers decided to put them in a box to move them home, but the job took them a few hours to get the cat comfortable with the interaction between them and her kittens.

“The kittens got together pretty quickly, but the mother was rough. We put her in a box and then came out immediately. So, we used the real cat cage when she finally came out of hiding. This test was quite difficult,” the man wrote.

The feral kittens were brought to a room in their rescuers’ house, and at that point things started to change.

The mother felt more confident and allowed the curious kittens to settle in and explore the area.

The boys put up an old mattress and fed the mother so that she was healthy and could feed her kittens. Although the idea of ​​adoption was never in the thoughts of these brothers, their good deed ended up making them the parents of a family of 6 cats.

This feline surprised them with the arrival of his whole family, but the boys acted in the best way. Share this sweet story and help inspire more people to lend a helping hand to animals in need.