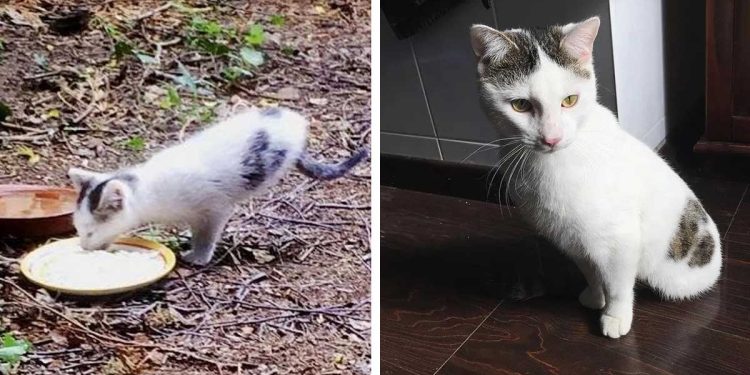 A woman from Berlin, Germany was feeding stray cats in her garden when a very special little kitten caught her eye.

Mareen, the young woman who found him, says Rocket was born with two legs due to a deformity. When the kitten approached her, he was only a few weeks old and very shy, because when she approached him, the little cat ran away at high speed. Rocket was very fast despite having two legs.

Every day Mareen brought her food and over time the little kitten grew in confidence. Very quickly, Mareen was able to touch it and took it in her hands to carry it home.

A very intelligent two-legged kitten was found in a yard

Mareen works in a shelter, she took the little cat to work. All the volunteers were amazed at the extent of Rocket’s ability with his two legs. He knew how to keep his balance thanks to his tail and move around easily. In addition, he ran faster than the other cats in the shelter.

Despite his undeniable ingenuity, the first day in his owner’s house was a real challenge for Rocket since he was unfamiliar with the environment. “He meowed all night, but I kept him company and talked to him.

As the days passed, Rocket opened up completely to Mareen, accepting the love she gave him and gradually coming out of his shell. Rocket was starting to show real signs of affection. He followed her wherever she went and purred constantly. He even turned on his back to ask for caresses.

Rocket was able to climb, run, and jump perfectly. Plus, he’s taken over his owner’s bed marking it as his territory and she has no problem giving up. Every night they sleep together. It’s a real hugging and purring machine. Every night he goes to Mareen’s bed and curls up in her arms with a chorus of purrs.

Despite his handicap, he is a real troublemaker with the other cats in the house, even if they get along well.

Rocket is a real rocket, energetic and full of life!

Would you have adopted Rocket?