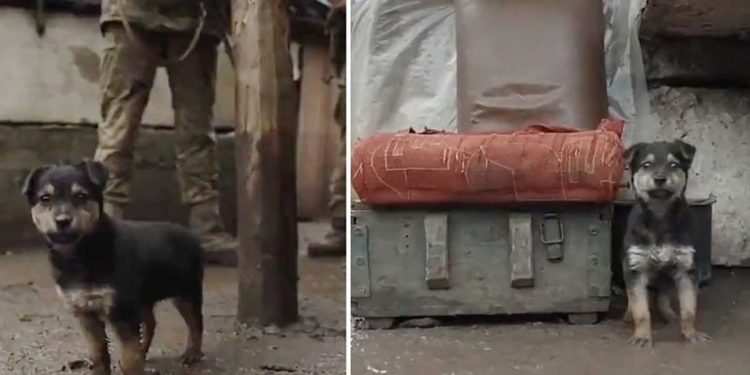 These Ukrainian soldiers adopted an adorable puppy they found alone in the cold and now he’s their protector.

The outbreak of the conflict in Ukraine and the bombings that hit the country in different places and cities shocked and saddened thousands of people around the world. But despite all of this, there are incredible, hopeful moments in the inspiring stories of resistance of the Ukrainian people. This is the case of a group of Ukrainian soldiers who decided to adopt a friendly street dog as their guardian.

The video that quickly went viral shows a really sweet and sweet scene amid all the chaos. This group of soldiers assigned to the defense of Ukraine proudly presents its newest recruit, a cuddly puppy named “Rambo”.

In the video shared by The Alban Times, the soldiers are heard saying:

He’s our protector, isn’t he, Rambo? We feel sorry for him. It was very cold outside. We took him to our post and he stayed with us.

In the video, you can see the little black puppy wagging its tail and happily walking around.

The soldiers say to the camera while a journalist laughs in the background:

He’s our security. It’s his job. He’s our watchdog. You can hear very well if there’s a stranger nearby. Rambo is doing a good job!

The video circulating on social networks has already received thousands of comments from people touched by the adorable interaction between the dog and the soldiers, and reminds us that in the conflict there are normal people who defend their country.

The truth in all of this is that a dog’s love can be very powerful, and I hope Rambo gives them a boost of spirits and a bit of happiness to help them through these tough times.