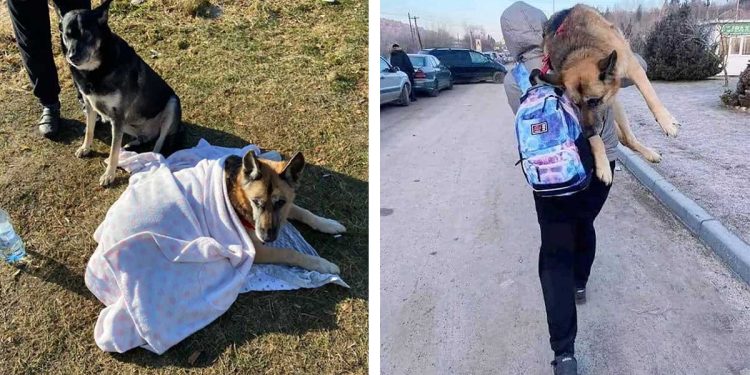 This courageous Ukrainian flees her country carrying her elderly dog ​​on her shoulders for 10 miles to cross the border.

The story of a Ukrainian woman who fled the country carrying her elderly dog ​​on her shoulders over 10 miles to cross the border has gone viral around the world, and it’s all because of her compassion and strength. so as not to abandon your 4-legged friend.

In a first-person account to The Guardian newspaper, Alisa detailed her harrowing journey with her family and dogs. The woman was very affected, because on February 23 she unexpectedly lost her father, and the next day bomb attacks broke out in major Ukrainian cities.

We lost a lot of things. We lost my father. I left my husband at the border. My heart is broken because I have never been without him. It’s a part of me, the biggest part of me, and now it’s not with me. There are no men with us.

Alisa works as a Python programmer for a German company that helped her leave the country for Poland with all her family and two dogs, including her old German Shepherd. However, despite all this, her husband was unable to cross the border due to his age and the mobilization order.

The woman says there were a lot of cars near the border with Poland and she and her family couldn’t stay in the car for the next three or five days, so they decided to walk for 10 miles by minus seven degrees.

During the difficult journey, the 12.5-year-old German Shepherd struggled to stand and walk, but fell every mile and couldn’t get up. Alisa tried to ask the people next to her for help, but they refused and told her to leave the dogs behind.

My dog ​​has experienced all the happy and sad moments with us. Mom’s dog is all she has left of her old life. So my husband sometimes carried our dog on his shoulders.

For this woman and her family, this was the most difficult experience they had to face. It was difficult to leave Ukraine, she had to continue without her husband; everything remained in Kiev, his life, house and acquaintances.

My plan is, I just don’t know. I want my husband here. For now, what I’m going to do with my children is decide where I want to stay: here in Poland, or go to Germany, like all my colleagues.