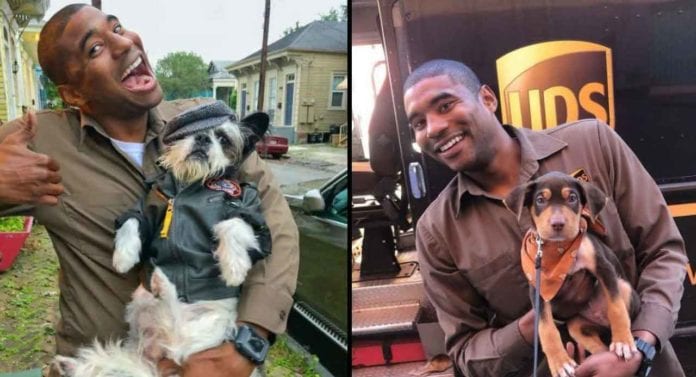 When the delivery truck pulls up at a house with dogs, you never know what the response will be. Some drivers make a mad dash for the door, dropping a package with lightning speed, hoping to avoid a canine encounter.

Then there’s UPS driver Jason “Jay” Hardesty, who has made friends with the furry greeters he encounters along his route.

Hardesty has been driving for UPS in New Orleans for seven years. About two years ago, he took a selfie with a really cute pup he saw while he was out delivering. He posted it online and people loved it. His friends and followers clamored for more and the dogs were happy to be included

“I don’t carry treats, the dogs are always just happy to see me,” Hardesty tells MNN, dispelling any rumors that there’s bribery involved in those happy selfie shots.

Hardesty is fond of all his friendly canine pals, but he admits he has a favorite: a boxer mix named Summer, shown below.

Hardesty, who describes himself on Instagram as “a very easily entertained UPS driver,” posts photos on his #pupsofJay account. People really discovered his joyful photos when author Jami Attenberg — who lives along Hardesty’s route — shared a link to his Instagram.

People immediately fell in love with his infectious grin … and all his happy canine customers. Plus, “I think I gained like 10,000 followers in 48 hours,” Hardesty told BuzzFeed News.

“People love the photos because they get packages and they love their dog,” Hardesty tells MNN. “It works out well for everyone.”

Plus, people along his route are tickled to see their pets show up on his feed.

“Customers love it because it gives your dog attention and every dog loves attention,” he says.

And there’s no jealous sniffing when Hardesty goes home at the end of the day.

“I do not own a dog,” Hardesty says. “That’s what makes it so much fun to play with other people’s!”