Venus The Two-Faced Cat Is A Wondrous Mystery 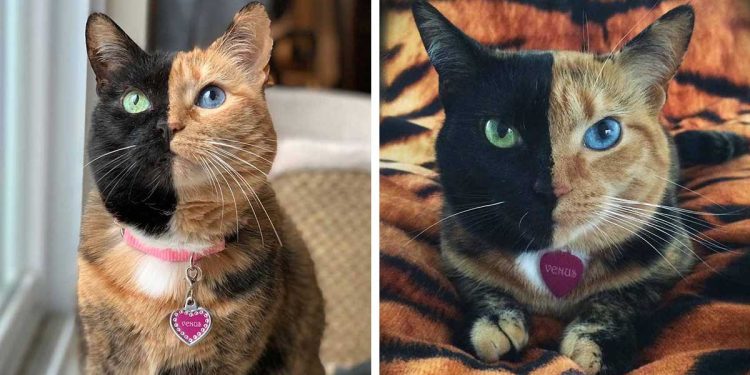 Venus is a beautiful two-faced cat who is quite famous on the internet due to her beautiful appearance which makes her so special.

Venus is a two-faced cat about 11 years old. She is quite famous on the Internet thanks to her features which make her very striking. He has half of his face solid black with one green eye and the other half orange and one blue eye. This trait that gives him his appearance may be due to a condition called “chimerism”.

Venus was adopted in 2009 from a dairy farm in North Carolina, US, according to The Dodo. Her foster mother is very proud of her, she says she’s a really sweet cat and she doesn’t usually damage the furniture in her house; He has his own scratching post.

Leslie Lyons, a professor at the University of California at Davis, studies the genetics of domestic cats, referring to Venus. She spoke with National Geographic and said she hadn’t seen another cat with her characteristics.

She’s extremely weird, but you can explain it and you can understand her.

Chimerism occurs when cells contain two types of DNA, which combine to form one. A feline chimera is a cat that has both types of DNA in its cells due to the fusion of two embryos.

To confirm if Venus is a chimera cat, genetic testing would be needed.

We can do a DNA fingerprint, like in CSI, and the DNA on one side of the body has to be different from the other.

What is certain is that this beautiful cat is a real celebrity, and on her Instagram page she has more than two million followers. He also has thousands of views on YouTube and has appeared on TV shows.

A post shared by Venus the Two Face Cat (@venustwofacecat)

Venus even has her own plush version; a toy brand has released the reproduction of this incredible kitten. This feline is truly an extraordinary animal.

This beautiful cat knows that beyond her fame due to her appearance, she is very much loved by her family and her well-being is the most important thing, and for them, Venus could only be perfect.