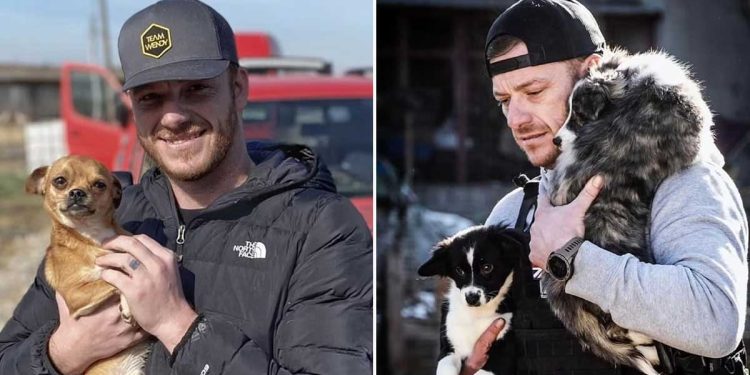 A British Army veteran and his rescue team help needy and war-affected animals in Ukraine.

After leaving the British Army, a veteran and his animal rescue team managed to rescue hundreds of animals left behind amid the Russian invasion of Ukraine, no matter what they risked their lives for, their sole purpose is to help the forgotten victims.

Ex-Private Tom and his UK-based rescue group, Breaking the Chains, have one mission: to save, rescue and assist all animals in need.

But, even if it seems like an easy task, it is not, because they do it in the middle of Russian bombardments and even dodge projectiles to achieve it.

A veteran and his team help animals in Ukraine

The Yorkshire, England-raised man has even been on the front lines helping to get animals out of bombed-out shelters. So far, Tom and his rescue team have managed to rescue over 700 dogs and cats from this war-torn country.

In addition, they delivered more than 100 tons of food and medical supplies to Ukrainian animal shelters directly affected by the war.

Although the veteran left the army two years ago, he admits that rescuing trapped animals in Ukraine is a very dangerous mission.

It’s like a military operation, so to speak. It’s a war, not a natural disaster like a hurricane or a tornado. There are so many factors to consider.

There are even people who are responsible for advising on the way forward, and often the mission is complicated because other needs are found.

It’s not just shelter animals that need our help, you have rescue centers, you have breeders, you have people who have taken in strays and abandoned animals.

Recently, in one of many missions, Tom and his team managed to rescue 120 animals trapped in a shelter in Kharkiv, Ukraine’s second largest city, which was devastated by Russian troops, but there were survivors.

It was a shelter that had exploded twice. Nobody could go to him, nobody could reach him and help the animals, so we went in.

The shelter was close to the Russian line of attack and artillery shelling continued around the area as the animals were removed. The dogs barked like crazy, they were very scared, but after a while they calmed down and the team managed to get all the animals out.

After the rescue, the animals were taken in a van to the Ukraine-Romania border and placed in various shelters. There they received medical attention and all the necessary care, but the best thing is that everyone is safe.

Missions are difficult, as most shelters have 500-600 animals, and Tom can only save 100 per mission.

However, Tom’s vision for animals in need in Ukraine goes far beyond saving them from war. Therefore, Breaking the Chains has formed an alliance with animal rescue center Bus Dog, and together they plan to expand a shelter in Romania to house 1,200 animals.

Tom and his team have certainly done an incredible job in Ukraine, but they know that many animals still need their help.

They encourage all volunteers or people who want to help, after all what they need are caring hands.