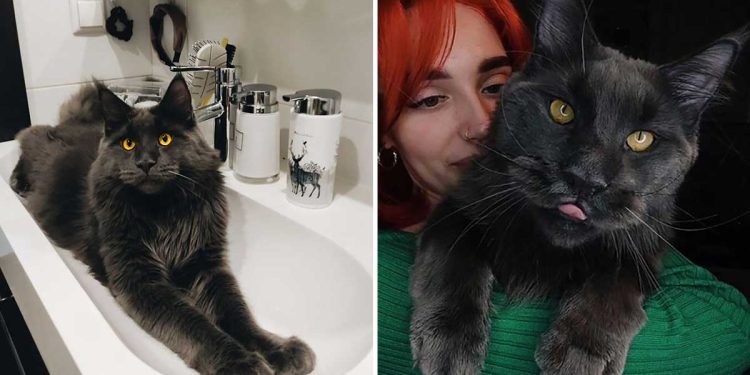 Meet Vincent, an adorable giant Maine Coon cat living in Russia who caught all the attention because he looks like a panther

There are many stories about cats that have stolen the hearts of netizens, but today we want you to meet Vincent, a Maine Coon cat that not only attracts attention for its large size and huge eyes, but also for its black and silky fur which makes it look like a panther.

Vincent has managed to capture the hearts of Internet users who, counting his TikTok and Instagram accounts, already have more than 540,000 followers. Plus, her owners, Andrey and Anastasia, are tasked with mesmerizing the world with adorable and entertaining videos and photos of their beautiful, fluffy cat.

This family lives in Russia and they have lived together since the feline was a pampered little kitten.

The couple decided to keep the kitten because they felt something was missing in their lives and it was too early to have a child. For this reason, they decided that a cat would be the ideal pet to lift their spirits and give some meaning to their everyday life.

Although they knew having a cat would cause problems renting an apartment, since animals are rarely allowed, they did not hesitate to do so. Also, since they met Vincent, his little face stole their hearts and they decided to adopt this adorable all plush creature, no matter the inconvenience.

The couple first saw the kitten on a website, saying: “His muzzle in the ad photo seemed to call out to us.”

In this way, he arrived in his new home and became the new center of attraction in the family, because he was very tender.

The day we brought Vincent to his new home, I noticed a lot of people staring at him. The long chest and big head certainly made him unique from other cat breeds.

The couple didn’t decide on the name of their cat right away, but one day, while watching a TV series, they decided to name it after the main character.

Now, Vincent is 11 months old and has grown by leaps and bounds, plus he weighs around 20 pounds, which surprises people.

The couple say getting it off the ground is a difficult task, however, they hope it will continue to grow over the next 2 years.

Noticing that Vincent’s appearance was attracting a lot of people’s attention, the couple decided to create a TikTok and Instagram account for the chat. There, people and followers of adorable Vincent can enjoy his beautiful pictures and curious videos that his parents upload daily.

The cat has grown elegant, elusive and always keeps a watchful eye on what we’re doing.

Like any cat, Vincent is very curious, so wherever the couple is, he always keeps an eye on them.

In addition, he likes to play with a small ball, as if playing football, and when he gets tired, he brings it to his owners to throw.

He catches the ball and brings it back to us to throw it. So it’s not just the size of a dog.

Many people are not only surprised by Vincent’s tall stature, but also by the fact that the couple let him sit with them at the table. But they pretend that the lovable Vincent is like their son, and that’s why they try to please him as best they can.

Andrey said Vincent is not easy to care for, so people should think long and hard before adopting or buying a cat.

However, despite all the inconvenience this may bring, Vincent remains the main reason for happiness in their lives.