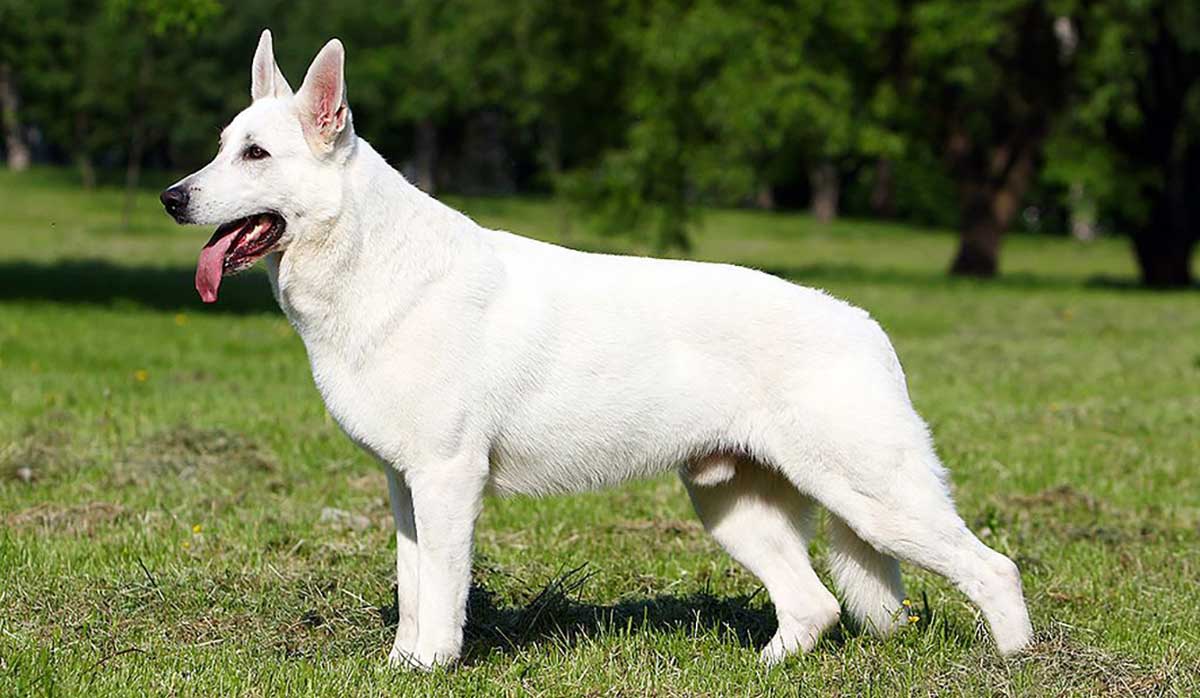 The White Swiss Shepherd (The Berger Blanc Suisse), perhaps one of the most beautiful specimens of dogs that exists. He is considered an extremely beautiful dog, a good companion at home and very useful in various areas to which he is subject.

This dog is part of the shepherd family, as its name suggests, and has been known by many names over the years. He was called white shepherd, Canadian shepherd or American shepherd, although he is generally known as white German shepherd because he shares all the characteristics of the German shepherd, where he comes from, except the color of his fur.

The breed has a soft and docile nature, it is not aggressive, it is easily trained and very quickly becomes attached to its owners.

With a wolf appearance and dense white fur, the White Swiss Shepherd is quite simply a beautiful dog, both morphologically and phylogenetically.

Quite rightly, they say about the White Swiss Shepherd breed that it is a dog with a positive outlook on life. He is friendly, but capable of being not only a friend, a pet, but also an alert watchdog, a formidable guard.

In this ‘ Pets Feed ‘ breed sheet, we will detail everything about these calm, intelligent and loyal sheepdogs.

The Swiss Shepherd very quickly becomes attached to its owners and is ready to stand up for them at any second. He loves to spend time next to the owner, while he knows how to recognize when he is inclined to communicate, and when not.

According to the FCI standard of the breed, the height at the cross is 60 to 66 centimeters for males and 55 to 61 centimeters for females. The ideal weight is 30 to 40 kilograms for men and 25 to 35 kilograms for women. The White Swiss Shepherd (Berger Blanc Suisse) is a robust and muscular dog, but elegant and harmonious at the same time.

His body is elongated, being the ratio between the length and the height at the cross of 12:10. The cross is well raised, while the back is horizontal and the back very muscular. The rump, long and medium wide, leans gently towards the base of the tail. The thorax is oval, well developed in the back and with the marked threshold. However, the chest is not very large. The sides rise slightly to the height of the belly.

The head of the White Swiss Shepherd is powerful, fine, finely molded and very well proportioned to the body. Although the nasofrontal depression is not very marked, it is clearly visible. The nose is black, but the “snow nose” (totally or partially pink, or which loses pigmentation at certain times, especially in winter) is accepted. The lips are also black, fine and tight. The eyes of the White Swiss Shepherd are almond-shaped, oblique and brown to dark brown. The large ears, with high insertion and perfectly erect, are triangular, giving the dog the appearance of a wolf so characteristic of the breed.

The tail of this dog has the shape of a saber, is weakly inserted and must reach at least the hock. At rest, the dog suspended it, although the distal third could be slightly bent upwards. During the action, the dog lifts its tail, but not above the margin of its back.

Fur is one of the characteristics of this breed. It has a double coat, dense, medium or long and well stretched. The internal hairs are abundant, while the external hairs are rough and straight. The color should be white throughout the body.

The Swiss Shepherd is a family friend. Also, due to her good learning ability and discipline, he is often used as an assistant to rescue services, law enforcement.

In general, the White Swiss Shepherd (Berger Blanc Suisse) is an intelligent and loyal dog. His temper may be somewhat nervous or shy, but when he is well educated and socialized, he easily adapts to different situations, so that he can live in different places and under different conditions.

Socializing puppies is very important because, due to their sheepdog nature, White Swiss Shepherds tend to be reserved and careful with strangers. They may even be very shy and become aggressive out of fear. They can also be aggressive towards other dogs of the same sex. However, when properly socialized, these dogs can get along with strangers, dogs and other animals. In addition, when they are well socialized, they generally get along very well with children and are very affectionate dogs with their family.

With a good socialization and a good education, the White Swiss Shepherd can be an excellent companion dog, whether for families with children or for adults. Of course, you should always monitor interactions between dogs and children to avoid risky or abusive situations, from child to dog or vice versa.

You can keep a Swiss shepherd dog both in the house and in the aviary. It is unpretentious, but requires a lot of attention from the owners. Representatives of the breed are very mobile, with any method of keeping they need daily walking, physical activity.

The Swiss shepherd dog loves various active games. So, take a ball or disc, frisbee with you for a walk. The dog will gladly support any fun.

Grooming the Swiss Shepherd should be done regularly to maintain a healthy and beautiful exterior. The following are the necessary procedures that are important to carry out on time and in accordance with all the rules:

Swiss shepherd dog’s health depends on proper, balanced nutrition. The diet should contain a sufficient amount of minerals and vitamins.

If you choose artificial feeding, buy premium food. It contains all the necessary components.

Natural feeding has its own rules:

Puppies need to be fed a highly nutritious, good quality diet to develop and grow as they should. As a guide, it is best to feed them 3 or 4 times a day.

Once a white Swiss shepherd is 16 months old, he can be fed adult food.

Important! Only a completely healthy puppy can be vaccinated. Colds, diarrhea, lethargy and poor appetite should cause vaccination to be postponed.

On average, the white shepherd dog can live 11-15 years.

Nature has awarded the Swiss shepherd dog with good health, but not everything depends on natural data. The owner must take care of the pet and monitor its condition. Only in this case can the dog live the maximum number of years.

The duties of a dog owner include:

Every dog ​​owner should be aware of the predisposition of his pet to certain diseases. The following are the diseases that occur most often in the white shepherd dog:

While albino dogs can have white fur, not all white dogs are albino and do not confuse them. Albino dogs do not have normal pigmentation, so their skin is usually pale pink and their eyes are very light and pale. White dogs that are not albino, have darker eyes and skin, and generally do not have the health problems that albino dogs have.

This misconception led to the change of the standard of the German Shepherd, to the exclusion of white dogs. As a result, white dogs stopped being used as breeders and puppies of this color were eliminated. After World War II, the white German shepherd was considered an aberration in Germany, but he was still bred in the United States and Canada without major health problems in the breed or “degenerate” dogs.

In the late 1950s, the German Shepherd Club copied the Germans’ idea and eliminated white dogs from the official breed standard, so breeders of these dogs could only register them for the American Kennel Club, but not in the breed club. In the 1960s, an American breeder named Ágata Burch emigrated to Switzerland with a white shepherd named Lobo. It was with Lobo, other dogs imported from the United States and a few other European countries, that several Swiss fans began to breed these dogs and developed the breed in Europe.

Finally, the Swiss Canine Society recognized the white shepherd as an independent breed, under the name of White Swiss Shepherd. After several efforts and presenting an irreproachable book of origin with eight pedigrees of different lines, this company made recognize with the international cynological Federation (FCI) the white Swiss shepherd provisionally with the standard n ° 347.

Today, the White Swiss Shepherd is a very popular dog for various functions, from the company to search and rescue work. Although the breed enjoys some popularity in Europe and North America, it is not as well known as its brother the German Shepherd. However, every day has more fans around the world.

The Swiss shepherd dog is extremely hardworking, disciplined and responsible. He has an excellent memory, he learns quickly, memorizing commands almost from the first time. Shepherd obedience at the highest level, subject to proper education and training.

The basics of training take place at an early age of up to 5-6 months, at which time the Swiss shepherd puppy learns the basic commands. A six-month-old pet can already be trained at a more serious level. A young Swiss shepherd dog at the age of 1 year is ready for a special training course.

It is recommended to master complex specialized skills (protection, assistance to people with disabilities, etc.) with the help of a specialist at a special training ground.

The first officially registered German Shepherd Dog with a normal coat had a great-grandfather with a pure white coat.

The Swiss shepherd dog was prized by farmers for blending in with the white wool of sheep, without standing out in the flock that was under his protection.

For a long time, they did not want to recognize this breed as a separate species. All because of the misconception that white coat color negatively affects the performance of dogs.

The Swiss shepherd dog is suitable for people who like to spend their free time on the move, actively. Below are the main advantages and disadvantages of this breed. After reviewing them, you can understand whether this breed is suitable for you or not.

Descendant of a white dog, Horand (or Hektor, as you prefer) passed on the genes of white fur to his offspring, even when he was not a white dog. Thus, the original German shepherds could be dark, light or white.

In the 1930s, however, the absurd idea appeared in Germany that white fur was characteristic of Low German shepherds and that dogs with this fur degenerated the breed. This idea was based on the belief that white dogs were albino and, therefore, had health problems that could be inherited by their offspring.