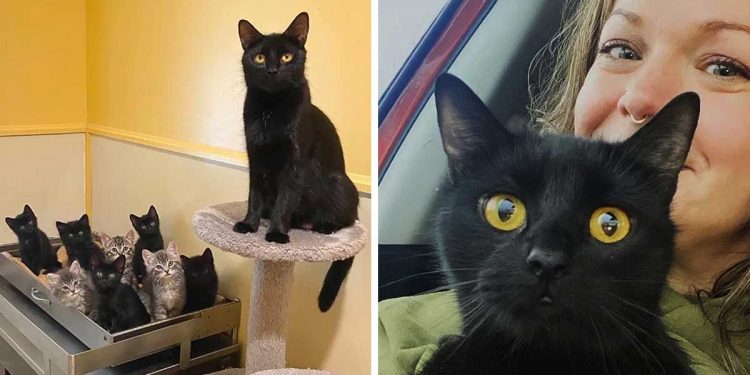 After losing one of her pets, a woman who adopted a kitten decides to return to the shelter and adopt her beloved feline mother.

A pregnant cat came to The Exploits Valley SPCA animal shelter, luckily, she got the help she needed. At that time, the cat named Queenie, who was about two years old, was very friendly and established a great relationship with the shelter staff.

The volunteers knew that Queenie had given birth to several litters while living on the streets, but now she had someone to help her deliver the baby. After spending a few days at the shelter, the cat finally gave birth to eight little babies, luckily all the kittens were born healthy.

Queenie demonstrated her role as a mother and immediately got to work caring for her demanding babies and meeting all of their needs.

A woman adopts a kitten and returns to her mother

Although caring for eight cubs was no easy task, the cat gave her kittens her full attention and watched over them as they progressed. Once the litter grew large enough, they were put up for adoption and within days all the kittens’ found homes.

But Queenie stayed at the shelter waiting for the perfect home for her, what she didn’t know was that it would take time.

Queenie raised happy, plump, healthy kittens, and now it’s time for her to be someone’s baby.

As her little babies grew into beautiful young cats in each of their homes, the cat was still waiting for the perfect family. Little by little, her stay became the longest at the shelter, since she gave birth, took care of the kittens for eight weeks and now waited for a home.

After spending six months at the shelter, Queenie has officially become the longest serving resident cat at the Exploits Valley SPCA.

Not only were her cubs adopted, but every feline that was her roommate also found a home, and she continued to hope.

She is so sweet and it would be wonderful for her to find a home for this Christmas and forever.

Luna, one of Queenie’s kittens, has found her forever home with Allison Crowe, a kind-hearted woman who loves animals. Unfortunately, four months after adopting Luna, her cat Johnny passed away and the woman was very sad.

For the things of life, he came across a post from the shelter where Luna’s mother was said to be the oldest resident.

The news touched her heart and she knew she had to do something to help the loving kitten find a home.

Allison said according to Love Meow:

I decided my heart couldn’t take the sadness anymore, knowing that Luna’s mother was alone and her babies were gone.

So, Allison returned to the shelter for Queenie to finally fulfill her dream of finding a forever home.

By a twist of fate, Mama Queenie is adopted… Thanks to Allison for adopting our eldest daughter, just in time to spend Christmas with her baby.

After waiting six months at the shelter, Queenie was so happy to cuddle up in her new mother’s arms and have a forever home. The cat, now named Juno, loves her new home and the best thing is that she is happy to share it with her baby and her canine friend, Linkers.

Juno has become the queen of the house, and now she enjoys spending time with Allison and her adorable Luna.