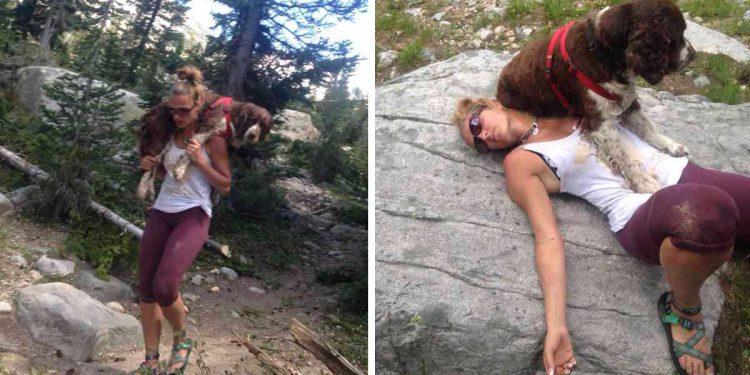 This woman decided to help an injured dog who was in the middle of a walk and to do so she had to carry him on her shoulders for 6 hours.

Tia Maree Vargas is a woman who was on an excursion to her hometown of Idaho Falls, USA, and became a heroine after carrying on her shoulders an injured helpless dog that lost about 55 pounds.

She was hiking with her 76-year-old father, Ted Kasper, and he, two kilometers from the summit, decided to rest and wait for her.

After reaching the top and on her way to reunite with her father, Tia managed to see a large English Springer Spaniel limp and thanks to the plaque on her neck she was able to tell his name was Boomer. She did not hesitate to help him.

If it was my dog ​​or my son or someone I love, I would like someone to do it for me. There’s no way I can just leave it there and have my heart at peace.

Boomer’s eyes were swollen, in fact his whole body was. Among other things, he had cuts and scrapes on his stomach and on his head.

Saving this little dog was a challenge, but it was well worth it.

I picked up the dog, I immediately felt the difficulty. I have never felt anything like this before. I had to crawl under him to lift him onto my shoulders. I took him to where my father was.

Ted decided to take pictures when he saw his daughter descend with the dog on her shoulders.

Tia remembers her father saying to her, laughing:

Don’t you think this hike is quite difficult? Do we also have to bring a dog? My father makes me laugh. His sense of humor kept me going. That’s a great man.

They continued the tour and decided to take the less steep path to make it easier, but what they didn’t take into account was that the authorities had warned that the pass was closed due to snow and debris.

We got lost twice. We couldn’t find the trail due to snow and downed trees littering the trail and then it started to rain. My head and neck hurt a lot, my legs were shaking. I was on the verge of tears thinking, ‘I have to take this dog out, I don’t want to let him die.’

When I wanted to give up, it was when I prayed. I felt something inexplicable, it was as if someone had lifted the weight from my shoulders. My father’s prayer and jokes gave me strength. I thought, ‘I’m fine. I can do it’.

It started to rain, and Tia and Ted ended up on the wrong side of a river. The trail got so snowy and icy they had to slide onto another trail.

Obviously, Boomer was in great pain and hungry. We are happy to have something to give him. My dad gave him a good portion of his sandwich and I gave him cookies.

After walking seven miles for six hours, they were able to reach their destination and the woman found a note left by the dog’s family on a notice board that read:

Boomer was lost because his family was on an excursion the day before and he wandered away and fell into a snowy crevasse 30 yards, then rolled another 60 yards.

They wanted to find their dog, but on the other hand, they knew they would have to say goodbye to him when they moved to Arizona, since they couldn’t take him with them. So for Tia, it was good news that they allowed her to stay with him.

I haven’t had a dog for 15 years, but Boomer is now like a son and 100% part of our family. We both had a Guardian Angel that day.

The vet examined Boomer and found that he mainly had bumps, bruises and scratches, as well as a dislocated joint with torn ligaments in his leg. He is on the road to recovery and has done very well.